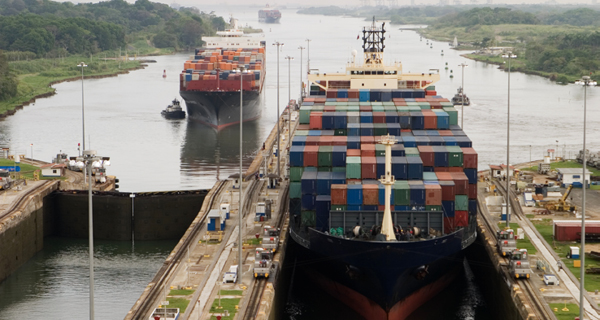 Since 2013, Mid-Atlantic and Southeastern seaports have seen a 20-percent hike in volumes compared to just 5 percent on the West Coast. JLL research attributes this growth to the expanded Panama Canal, among other factors.

Only one year after opening, the $5-billion Panama Canal expansion is already having a major impact on North American shipping. As a result, industrial real estate demand around East and Gulf Coast ports is escalating, finds a new report from JLL, a commercial real estate services company.

1. Gulf Coast ports are winning the U.S. seaport trade war. Thanks to the Panama Canal expansion and increased downstream demand in recent years, port volumes and industrial real estate demand are higher than ever in Gulf Coast ports.

2. Mergers and alliances are causing uncertainty and changing the shipping landscape. The industry has shifted from four shipping alliances to three leading alliances which, combined, affect 90 percent of global trade routes. In the short term, these alliances disrupt the industry for tenants while helping carriers stay competitive and reduce costs. With a number of mergers still occurring, control and travel routes will continue to shift.

3. Larger ships are calling on U.S. ports, passing through the new Panama Canal. In advance of the Panama Canal opening, ocean carriers ordered larger vessels to deploy across all cargo types. To accommodate these vessels, U.S. ports led efforts to employ new cranes, dredge channels, have deeper berths, and remove air draft restrictions. With larger vessels calling on ports, shipping liners are likely to reduce the number of port calls, which will only increase already fierce regional port competition.

4. Next-day deliveries and autonomous vehicles are bringing the trucking industry to new heights with new challenges. E-commerce isn't going anywhere, and neither is its dependence on trucking. The trucking industry is using technology more than ever to increase efficiency from the first to last mile, but congestion on the roads is getting worse.

The only true resolution is a complex, multi-year decision that would impede delivery times and increase operating costs. This provides opportunities for other intermodal sectors such as rail to ease the burden.

5. Rail needs to be nimble as competition from other transportation modes intensifies. Viewed by shippers as a cheaper, more environmentally sustainable alternative to trucking, the rail industry is expected to grow. With coal transportation waning, the industry is moving away from traditional cargo to being more nimble.

Intermodal volumes have been a bright spot for railroads, accounting for more than half of all railcar volumes, up from 40 percent just one decade ago.