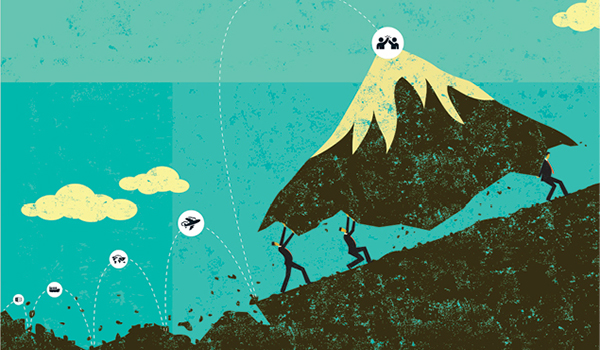 All logistics initiatives contain challenges: production mishaps that lead to late deliveries, traffic delays, communication errors. Some, however, pose unique challenges. Maybe it's because the goods moving are one-of-a-kind, oversized artwork that requires bespoke packaging and precise temperature control. Maybe it's the logistics know-how needed to build a state-of-the-art medical facility in a developing country. Or, it could be the detailed mapping required to move windmill blades across the country. With these projects, extraordinary efforts are par for the course.

Waiting for the Tuna Run

Rooney knew he could move the subs by air freight to Hawaii, and from there to Guam. This would place the machines about 800 miles from their final destination. However, he couldn't locate a company that provided air service to Palau.

"We contacted everyone we knew," Rooney says. Finally, one contact told him some charter services fly from Guam to Palau and return with the tuna harvest. Since their planes are basically empty going to the island, they might be willing to move the submersibles.

Rooney's team located such a service and learned they could use a freighter to move the subs to Palau. The catch? The freighters didn't make the trip every night. Tuna runs vary, depending on weather and tidal conditions.

Rooney needed to get the subs to Koror by April 25. For several weeks, he awoke in the middle of the night to phone Guam and check whether a freighter was headed to Palau.

Finally, hours before the deadline, Rooney learned a freighter was headed to Palau. The subs completed the last leg of their journey.

"If you work hard, dot your i's and cross your t's, you can make it happen," Rooney says.

Mobile laboratories are, by definition, mobile. However, few need to travel 5,000 miles across land and sea. Early in 2019, ITS Logistics Hungary was charged with moving a mobile lab from Budapest, Hungary, to Hanoi, Vietnam.

What's more, ITS had to work within tight time constraints. Just 72 hours after ITS received the final go-ahead from the consignee, the shipment was ready to travel. "It required many steps at once," says Peter Kuzma, ITS managing director.

The mobile lab sits atop a trailer-truck and is equipped with solar panels and its own power supply. To ensure their safety, each item within the lab had to be packed and secured. For instance, the solar panels were covered with a special protective foil, says Aniko Patocs, chief operating officer with ITS. The lab also was covered in foil, and a wooden crate built around it.

The lab, equipment, and truck moved by trailer-truck from Budapest to Luxembourg. From there, the shipment would fly to Hanoi. Ocean freight would have been more economical but taken too long.

While the lab and truck were being packed, ITS was working to obtain multiple approvals for the shipment. The lab is classified as "dual usage," meaning it can be used for both civil and military purposes. Many airlines won't transport such goods. Even when they do, the airline has to take numerous steps, such as notifying the relevant authorities about the route. The airline also inspected the invoice, packing list, export license, and end-user license.

A final step before the lab and truck took flight was a bomb check. That took another few hours.

Finally, the shipments were ready to go. The lab and truck arrived in Hanoi safely and on time. "There were lots of unexpected changes with this shipment," Kuzma says. "But all problems were solved, and it was a good feeling when it arrived."

a dose of Healthcare for an Emerging Country

Médecins Sans Frontières (MSF, or Doctors Without Borders) is known for the medical assistance it provides to people affected by conflict, epidemics, disasters, or exclusion from healthcare. While emergency assistance remains the purpose of the organization, it sometimes engages in major development projects that significantly impact critical access to healthcare in a specific area.

In March 2019, MSF opened the first of five phases of the MSF Hangha Hospital in Sierra Leone's Kenema District. The remaining phases will open over the next three years.

"We're responding to a need," says Carolyn Muegge-Vaughan, logistics coordinator. Kenema, a six-hour drive from Freetown, a port city and the capital of Sierra Leone, has one of the highest mother-child mortality rates in the world. When the Ebola crisis hit several years ago, more than 200 healthcare workers in the area died.

The healthcare capacity needs to be rebuilt, Muegge-Vaughan says. The hospital will have an attached medical academy.

The hospital is high-tech and conforms to standards used in much of the developed world. It's constructed of pre-fabricated materials. The pieces essentially click together, much like Lego blocks.

About 90% of the building components and medical equipment came from outside the country. Delays in obtaining supplies are common. At times, this is because it takes a while to fill the boat being used to bring supplies. In addition, moving through customs can consume several weeks.

Given the likelihood of delays, MSF will wait until equipment has arrived before it asks anyone who's coming to commission it. "We don't ask anyone to make flight arrangements until the equipment is on the ground," Muegge-Vaughan says.

One challenge, given the tropical weather that characterizes Sierra Leone, is maintaining cold chain integrity. To mitigate this, the hospital recently purchased a refrigerated truck. Previously, it would rent one when it needed to.

To ship small quantities of refrigerated items, MSF uses a "cold box." When properly packed with drugs and conditioned ice packs, the box can maintain temperatures between 36 and 46 degrees F for five days, as long as it is not opened.

The box also will send an alert if the temperature moves outside this range. MSF's freezers and refrigerators can hold their temperature for 15 hours.

The Kenema site has several backup generators and will be installing 1,635 solar panels. The panel farm will be the hospital's main power source.

ARTA, a logistics platform for shipping specialized items, received an inquiry from an individual who had been collecting stamps for more than 60 years. He asked to have his collection—90 volumes, insured for about $160,000—moved from his home in New York to the floating apartment building to which he and his wife had retired. Moreover, the transfer would need to take place during the two days the ship would be docked in Norway.

ARTA had two and a half weeks to make it all happen. "The challenge is the fun," says Tyler Haughey, ARTA business development manager.

The volumes were packed in archival tissue and placed in a crate approved for international travel. The crate traveled on a fine arts shuttle from New York to Miami. From there, it flew to Norway, where it joined the collector on the boat.

"We work to find the best solution for every client," says Adam Fields, ARTA founder and CEO. For example, a gallery contacted ARTA one week before Art Basel, an international art show. A painting by one of its artists needed to move from the United States to Switzerland for the event. However, the artist was still working on the painting. In fact, the work continued even once the shipping company arrived at the artist's studio. The painting was wet and required specific, careful packing.

After much coordination between the gallery, the artist's studio, agents in Basel, and the airlines, ARTA found a solution. The work arrived on time and in perfect condition.

The Logistics behind Wind Energy

The windmills that transform breezes into electricity feature blades about one-third longer than an NBA basketball court. Moving them requires the same skill and dedication needed to land three-pointers and free throws.

The blades had traveled from Europe to Brownsville, where stevedores used cranes to offload them from the ship and to a staging area so they could go through customs. To accommodate their length, the railroad relocated and realigned many of port's fences.

Because windmill blades are made of carbon and glass fiber, they're surprisingly fragile, despite their size. Damaged blades often can't be used, resulting in the write-off of an investment that typically runs hundreds of thousands of dollars.

The stevedores, train engineers and conductors, and other individuals handling the blades needed to learn how to move them carefully. The stevedores used massive cranes and forklifts, along with specialized securement equipment, to load them onto the railcars.

The first attempt took about eight hours. With practice, they soon were able to load several each day.

Each blade was transported on two articulated flatcars, as one car wouldn't have been long enough. Even with the articulated cars, however, no section of the rail line could curve more than about 15 degrees, or it might damage a blade. "Our challenge was to find a straight route to the windmill farms," Torres says.

On top of that, all sections of the rail line needed to accommodate the heft of the blades, which weighed 77,000 pounds each. The team at Brownsville used software to map each mile of the route, taking into account the weight requirements and constraints on the amount of curve the trains could accommodate.

the art of project logistics

In 2015, Atelier 4, a fine art services company, was charged with moving more than three dozen pieces of art from around the world to an art event on the Spanish island of Ibiza. The art included sculptures standing more than 18 feet tall as well as paintings measuring 12 by 9 feet. "There were lot of moving parts," says Jonathan Schwartz, president of Atelier 4.

The pieces of art were wrapped with archival foam and braced within a wood case. The cases were covered in marine-grade plastic wrap and two layers of tarpaulins.

Because of the size of some pieces, they initially were going to move by ocean vessel from Los Angeles. All was proceeding smoothly, until talk of a port strike grew stronger. "I was getting nervous about the timing," Schwartz says, given his client's need to meet the event's opening date.

An employee of the NVOCC, with whom Atelier had formed a strong relationship, tipped them off to the imminent port closure. Schwartz and the client decided to cancel the shipments and fly the art to Europe. "If we waited an extra day, it would have been too late to retrieve the shipment," he says.

The shipments landed in Luxemburg, were trucked to Barcelona, and then transferred by ferries to Ibiza. Atelier also had to locally source the cranes needed to lift and assemble the largest pieces and move them to the island. All pieces arrived on time.

At the destination, workers handled the painstaking task of removing the art from the crates, cleaning the pieces that required it, and assembling the sculptures. "It was a team effort," Schwartz says, involving, among others, the artist's dealer, a project manager, and a Madrid- and Barcelona-based art-handling team executing the installation.