Fashion Supply Chain: What to Where

While most fashion and apparel executives are optimistic about the 5-year outlook for the industry, the percentage fell from 92.3 percent in 2016 to 71 percent in 2017, a record low for the United States Fashion Industry Association's annual Fashion Industry Benchmarking Study, which surveyed executives from leading fashion and apparel brands, retailers, importers, and wholesalers.

The rise of new challenges for the industry—specifically, the "protectionist trade policy agenda in the United States," which executives rank as their top challenge in 2017, up from being ranked the #10 challenge last year—could explain the decline.

Among the key survey results:

The survey was conducted in conjunction with Dr. Sheng Lu, assistant professor at the University of Delaware Department of Fashion & Apparel Studies.

Survey respondents rated each primary sourcing destination against three criteria with the most significant impact on sourcing decisions. Overall, no destination is perfect. The results, however, explain why U.S. fashion companies typically use a mix of sourcing destinations to balance cost, speed, flexibility, and risk control. 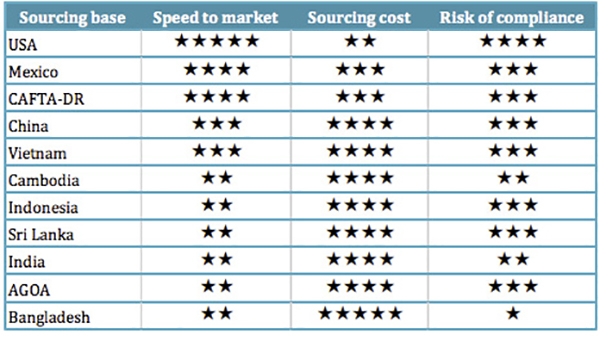