From Sea to Supermarket: Tracking the Catch of the Day 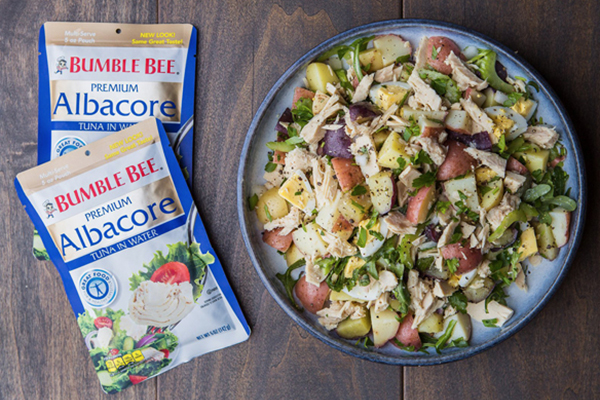 To learn how Bumble Bee's fish were being caught, Tony Costa, chief information officer (left) visited remote villages in Indonesia, one of the sources of yellowfin tuna, and met the local fishermen.

In an age when consumers keep pushing companies to prove their sustainability, social responsibility, and fair trade track record, Bumble Bee Foods is counting on its blockchain project with SAP to earn high marks.

The San Diego-based shelf-stable seafood brand has put the power of supply chain visibility into the hands of its end customers. Shoppers browsing the frozen fish section in some U.S. supermarkets can pick up one of Bumble Bee's Natural Blue Anova yellowfin tuna packets, scan a QR code with their mobile phones, and see the entire history of the fish back to when it was caught by an Indonesian fisherman and received at the processing plant.

"We want to educate consumers on the path their tuna takes, and we offer ways they can do a social audit and see the sustainability aspects of our products," says Tony Costa, Bumble Bee's chief information officer. "The blockchain initiative is a continuation of that."

Bumble Bee started its consumer-focused "Trace My Catch" supply chain visibility program in 2015 with its core product, albacore tuna. It eventually extended the program to its salmon and sardine product lines.

At the Trace My Catch section of Bumble Bee's website, consumers input a code from the can or pouch. The site retrieves a long list of information specific to the product including: fish species, fishing method, the ocean where the fish was caught, vessel names and countries, fishing trip dates, and processing location.

The long tail of traceability back to the point of origin is a growing concern among consumers, who began questioning where their food comes from and holding food companies responsible for their supply chain practices.

In parallel to this external uptick in corporate social responsibility momentum, Bumble Bee took a look internally and decided to overhaul its supply chain operations in Fiji, one of the company's prime areas of tuna supply. Through this effort, Bumble Bee was able to capture greater amounts of sourcing data, which started the ripple effect of more efficient reporting, better information-gathering techniques, and increased supply chain visibility—much of which could be served up to consumers via the catch-to-can website.

So, in 2014, when Bumble Bee acquired Florida-based Anova Food and began integrating it into the fold, it was clear to company executives that Anova's Natural Blue frozen line would also be included in the company's track-and-trace footprint, but with better technology.

"This all started as a supply chain visibility and optimization project," Costa says. "When we acquired Anova, we knew we wanted to expand it to include the Natural Blue product line as well."

During the past few years, Costa visited remote villages in Indonesia, one of the sources of yellowfin tuna, to see how the fish were being caught and how it moved through the processing plant, seafood inspection and health safety facility, and then into a finished good.

During his trips there, a unique opportunity presented itself. The Indonesian government, the Indonesian Ministry of Fisheries, and MDPI (Yayasan Masyarakat dan Perikanan Indonesia), a nongovernmental organization focused on creating responsible and sustainable fisheries activities in Indonesia, wanted to collaborate on a pilot project. The goal was to use technology-based traceability systems for small-scale fisheries and, over the long term, combat illegal, unregulated, and unreported (IUU) fishing activities.

Indonesia is considered the world's largest producer of tuna with the most abundant tuna fisheries in the world. However, IUU fishing-incurred losses to the country are estimated to be as high as US$3 billion annually, according to the International Pole & Line Foundation. For several years, the Indonesian government has been taking steps to reshape the fishery sector, and a chance to work closer with Bumble Bee came at the right time.

Bumble Bee's catch-to-can coding system, though, is limited. It requires users to take extra steps to input the code into a website. Costa says the company wanted to take a different approach with Anova's products, and thought scanning a QR code would make the process more efficient all the way through the supply chain.

An important piece also needed upgrading—the underlying technology to expand the kind of visibility Bumble Bee wanted both for its own supply chain and sustainability requirements and for its end customers, shoppers in supermarkets.

Costa thought this phase of the traceability program might be a good use case for blockchain, an advanced technology that could follow all the steps involved from the ocean catch to the consumer's shopping cart. He called SAP for help.

"We wanted transparency all the way back to when the fisherman caught the fish, took it back to shore, and registered his catch with the fish buyers, who take it to the processing plants," Costa recalls. "We thought blockchain might help us provide the level of detail we wanted. I called SAP because of its blockchain expertise."

There has been a great deal of hype around blockchain technology and its promised capabilities for everything from cryptocurrencies to, you guessed it, supply chain management.

Blockchain is a database shared across a network of computers; records added to the chain become difficult to change. Blockchain allows companies like Bumble Bee to store data and create a tamper-proof supply chain history. Each participant in the chain can share and see that history, according to SAP.

In fact, Bumble Bee is the first food company to incorporate SAP blockchain technology into its production.

"The supply chain itself is a great source of use cases for blockchain because companies have so many business challenges where this technology can be applied," says Richard Howells, vice president of SAP's Solution Management for Digital Supply Chain group. "The key is to identify these business challenges, add the technology and go from there, not the other way around."

For Bumble Bee, which is dependent on many supply chain pieces beyond its own walls, SAP's Cloud Platform Blockchain and Analytics Cloud services ensure continuous data accuracy and integrity.

"Bumble Bee has been able to track and trace across its supply chain for a while, but blockchain brings it to the next level," Howells says. "When you don't own the whole of your supply chain and rely on many partners to provide data, blockchain secures the integrity and authenticity of the data from multiple sources, without compromising their private information."

Although Bumble Bee's supply chain is complex and relies on many individual fishers in remote areas and across geographies, layering the blockchain technology into the supply chain and ERP was not too complicated, Howells says. Mobile phones, in fact, are the enablers, allowing people throughout the process to easily add their relevant pieces of information.

SAP and Bumble Bee began designing the project scope and tracking capabilities in September 2018, and by December the pilot program was off the ground. The program officially went live in February 2019, and was announced publicly in March 2019.

By the end of 2019, Costa expected blockchain to have been used to track and trace 800,000 cases of yellowfin tuna products. To date, Anova's Natural Blue fair trade-certified ahi tuna steaks are found in several retail chains, including Albertsons, Hy-Vee, Price Chopper, and Safeway.

Bumble Bee also plans to roll out the blockchain solution to its supply chain practices in Thailand and Vietnam, and Costa sees potential for it to be used across the company's entire product portfolio. By November 2019, some of Vietnam's suppliers were using blockchain on select products, and Thailand was expected to come on board by the end of 2019 or in early 2020.

"The goal is to quickly get this out to the rest of Indonesia, and then bring it to other regions," Costa says. "Technology, in this case, is not limiting supply chain participation. It's getting everyone to contribute."

Editor's Note: In November 2019, Bumble Bee Foods filed for bankruptcy protection in the wake of mounting debt related to a 2017 federal price-fixing case and agreed to sell its assets to Taiwan's FCF Fishery Co. for roughly $925 million. As of press time, the company was operating as usual and the SAP project was in full effect.

Bumble Bee wanted to extend its "Trace My Catch" sustainability and traceability program for canned products to its frozen fish brand, Anova. But instead of requiring end customers to type a can's code into a website, the company wanted a more modern approach using mobile phone-scannable QR codes and blockchain technology.

Roll out a similar track-and-trace blockchain project with Bumble Bee Anova's Thai and Vietnamese tuna fish suppliers, and explore ways blockchain can be applied to other Bumble Bee products and brands. Suppliers in Vietnam are already using blockchain for some of the products produced, and the company anticipates onboarding blockchain to suppliers in Thailand by early 2020.