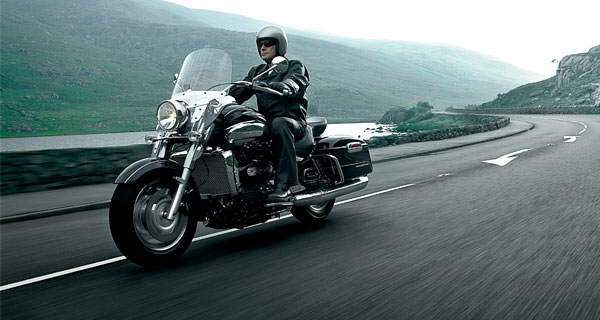 Iconic British manufacturer Triumph Motorcycle —famous for giving Steve McQueen the wheels to leap reality in an equally iconic scene from The Great Escape —signed a three-year contract with CEVA Logistics to streamline, integrate, and optimize the global logistics flow of components, accessories, and finished goods.

Triumph, which produces 50,000 motorcycles a year, will work with the global 3PL to handle ocean shipments of motorcycles and components from suppliers in Asia and Europe throughout the company’s global manufacturing network.

Key to the partnership is CEVA’s Ocean Plus solution, which manages product movement from order placement to final delivery. The challenge for Triumph is twofold: seeking visibility to and control of more than 50,000 purchase orders from 380 suppliers annually; and managing component supply against key milestones to ensure production lines are fed while stock levels remain optimized.

Deploying Ocean Plus will facilitate Triumph’s growth plans by providing a scalable solution across multiple geographies and transport modes. CEVA will combine this functionality with purchase order management, vendor compliance, and optimization programs.

The U.S. Department of Transportation (DOT) has given final approval for British Airways, American Airlines, and Iberia’s plan to start joint cargo and passenger operations across the Atlantic in fall 2010. The DOT granted anti-trust immunity to the U.S. and U.K. carriers and to Iberia (Spain), their partner in the Oneworld alliance, to share revenues and profits and coordinate capacity, routes, fares, and sales on services between the United States, Canada, Mexico, the European Union, Norway, and Switzerland.

The decision marks a successful end to a decade-long attempt by American Airlines, the second-largest U.S. carrier, and British Airways, Europe’s number-three airline, to join forces across the Atlantic trade. The carriers are now free to operate jointly without fear of regulatory probes and to compete against the rival SkyTeam and Star alliances, which already have anti-trust immunity. In return, the carriers must cede four pairs of take-off and landing slots at London Heathrow Airport to rival airlines.

Daimler Wings It with DHL

DHL Global Forwarding has been entrusted with global distribution of the new AMG SLS Gullwing Mercedes-Benz sports car – forwarding them by air and ocean transport from Daimler’s southern Germany production plant to 40 destinations worldwide. The manufacturer’s decision to outsource the roll-out was partly predicated by DHL’s network, which covers 220 countries and territories around the world, as well as its range of logistics services geared to the automotive industry.

Chinese demand for automobiles is booming, and the country is now the largest car market in the world. The challenge is efficiently transporting vehicles from coastal ports to hinterland areas. Seeing and seizing an opportunity, NYK Logistics recently requisitioned 100 new car trailers for inland transportation, bringing its total pool of trailers to more than 700, and making it one of the leading foreign-capitalized companies providing finished car transport service in China.

The NYK Group has been transporting finished cars over land in China since 2003 and now provides transportation services throughout the country to Chinese, European, and Japanese auto manufacturers that produce cars domestically. Domestic sales of new cars in China has since surpassed 13 million units. The resulting demand for inland transportation has expanded considerably and is expected to continue to grow in tandem with imports and exports. By purchasing more car trailers, NYK will be in a better position to accommodate transportation demand through use of its vast Chinese network.

South African-based supply chain management company Barloworld Logistics recently debuted a new initiative that brings together lean process thinking with a commitment to innovation and environmental sustainability. Transportation is responsible for approximately 13 percent of South Africa’s total greenhouse gas emissions, so the 3PL’s new Green Trailer is welcome news, given the considerable reductions in the amount of fuel it uses.

Developing the new equipment was an effort in collaboration: the primary research was led by South Africa’s Council for Scientific and Industrial Research; the design by Barloworld Logistics; aerodynamic rig structures were built by Afrit, a South African trailer manufacturer; and Aerotruck, another local company, manufactured all the aerodynamic components.

Barloworld kicked the tires on its green trailer along the N3 and N2 between Johannesburg and Durban, with vehicles doing a round-trip loop covering 720 miles while maintaining more constant speeds than operating on secondary roads or in urban areas. Initial simulations demonstrated that once these changes were made, there was a 35-percent reduction in the total drag when vehicles traveled at speeds between 40 and 50 miles per hour.

Barloworld anticipates the Green Trailer project will reduce fuel consumption by up to eight percent over the next six months —confirming that significant savings and environmental benefits can be achieved by retro-fitting existing transport fleets.