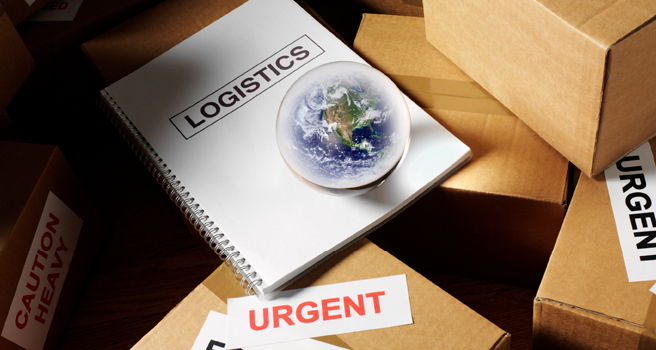 Manufacturing Supply Chains: What Does the Future Hold?

Nobody can predict the future, but some are certainly qualified to make educated guesses. Over the next decade, manufacturing growth depends on successful engagement with consumers, according to IDC FutureScape: Worldwide Supply Chain 2017 Predictions, a new report from IDC Manufacturing Insights.

The report makes the following 10 predictions for the decade to come:

"The coming years will greatly alter the technology landscape for supply chain organizations," says Simon Ellis, vice president of global supply chain strategies, for IDC Manufacturing Insights. "While the predictions offered here largely focus on the near to mid-term, the impact of many of these will be felt for years to come.

"It is worthwhile to note that predictions are not finite but rather occur on a continuum of change within the wider ecosystem of the manufacturing industry and global economy," he says.

The Great Recession caused many countries to turtle up and focus on their own problems. Now, however, global connectedness has exceeded pre-recession levels, according to the fourth edition of the DHL Global Connectedness Index, an analysis of the state of globalization around the world.

In 2015, globalization's expansion slowed, but didn't slip backwards. Additionally, data shows that the world was approximately 8 percent more connected in 2015 than it was in 2005.

Even with this data available, it's difficult to predict where globalization goes from here. "Policymakers have a substantial impact over whether globalization will advance or reverse and there is uncertainty in how this will evolve in the coming years," says Mike Parra, CEO, DHL Express Americas. "Looking forward, levels of global connectedness may increase, stagnate, or even suffer a sharp reversal. But given the parameters of the current situation, it is unlikely that increases could yield a state in which the differences or barriers between countries can be ignored.

"Nor is it probable that decreases could lead to a state in which the similarities or bridges that unite countries could be disregarded," he adds. "Social media and shared economic platforms have brought people and markets together, and we believe that that connectedness is unlikely to be reversed anytime soon."

Still, the global political climate has many companies wondering what they can expect. For example, Britain's exit from the European Union has made many global businesses uneasy.

"What needs to be evaluated is whether we are seeing a broader trend toward isolation and protectionism, which could prove powerful enough to reverse recent gains," says Parra. "Any significant impact of Brexit on aggregate levels of global connectedness could only come via contagion to other countries.

"It is too early to determine where this is the case, which is why the positive global trends revealed in this year's report are presented with some uncertainty," he notes. "There are many factors that could buffer the impact of Brexit on its global connectedness, most notably its breadth of connectedness.

"The UK ranks first out of 140 countries in the breadth of its international interactions, and—given the importance of physical proximity to connectedness—the European Union is likely to continue to be the UK's largest export-import partner. The extent to which this separation impacts their connectedness is largely in the hands of the European Union and UK."

The results of the U.S. presidential election have also left many speculating about its impact on globalization.

"The Trans-Pacific Partnership would likely have served to increase the connectedness of smaller partners, such as Chile and New Zealand, much more than it would have impacted Japan and the United States," Parra says. "However, these developments do reinforce the powerful role policy makers play in the future of global connectedness.

"However, as stated in the report, the future of globalization is unclear, and those policies don't independently translate to the reversal of globalization as much as they support its ambiguity," he adds.

Globalization hotspots are the cities with the most intense international flows of trade, capital, people, and information compared to their internal activity.

Current evidence—some still preliminary—suggests the world is about 8% more connected in 2015 than it was in 2005. 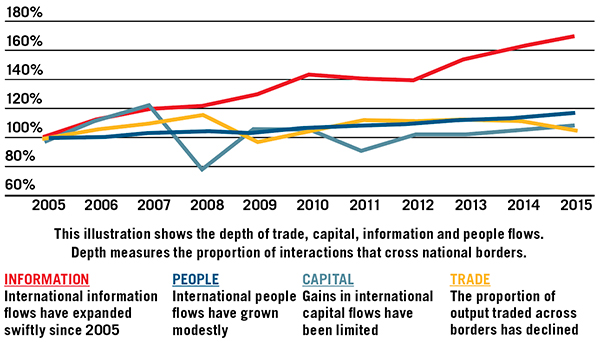 Slim: Trump Could Be Good For Mexico

Despite continuing talk about putting up a wall between the United States and Mexico, Donald Trump's presidency could wind up actually being good for Mexican business, says Carlos Slim, Mexican business magnate and one-time richest man in the world.

"It is going to be bad for the first few months, but President Trump is talking about expanding the economy of the United States," Slim told Mexico News Daily. "If they do grow at 4 percent and lower taxes for the middle class, that would be fantastic for Mexico, as the American people would have greater purchasing power for the goods and services that Mexico exports."

To reap the rewards of increased exports, Mexico needs to turn its gaze inward, according to the businessman. With an annual investment of $250 billion, Mexico can achieve growth rates of 5 percent as it had in the 1980s, Slim said.

Additionally, if Mexico can leverage increased production and create more jobs within its own borders, the country may not lose so many unemployed members of its workforce to their northern neighbor. With the exchange rate hovering around 20 pesos per dollar, Mexico can remain competitive due to its cheap labor, Slim said.

For developing countries, the ability to become part of global value chains (GVCs) depends on the ability to specialize in a specific area, such as production, research and development, or assembly, according to Value of Air Cargo: Air Transport and Global Value Chains, a report from the International Air Transport Association (IATA). For those nations hoping to successfully become links in these chains, air cargo infrastructure is crucial.

Global Value Chains (GVCs) enable countries to specialize in narrowly defined tasks, such as component production, research and development, or assembly. Tasks originating in a variety of countries are then combined, through a complex network of trade and investment links, to produce finished goods such as cars, computers, cellular phones, and even aircraft. The World Trade Organization estimates that almost half of global trade flow takes place within GVCs—and GVC trade has been growing more rapidly than other types of trade since the 1990s.

India is looking at expanding its national airfreight infrastructure. Traditionally, cargo in the country moves by highways or waterways, while flights are reserved mostly for moving people. But if all goes well, that is about to change.

"In India, the movement of cargo through airlines hardly exists because you have only two airlines and three aircraft as compared to hundreds of aircraft in other countries," Ashok Gajapathi Raju, India's aviation minister, told The Indian Express. "We need to develop it, and the government sees it as an opportunity to double the income of farmers."

Currently, moving cargo by air is inefficient, and moving perishable cargo is nearly impossible because of clearance times.

"If the dwell time in the airport is more than 72 hours, the perishable goods will have to be discarded," Raju said. "We are working on those areas to streamline the transaction process, at the same time encouraging businesses to take up interest in promoting the interest of the farming community."

The initial focus of the Aviation Ministry will be expanding rural connectivity within India. Raju also notes that the country has an abundance of produce that could be exported to neighboring countries by air, if only the infrastructure existed. He expects upcoming growth in India's aviation sector to exceed 20 percent.