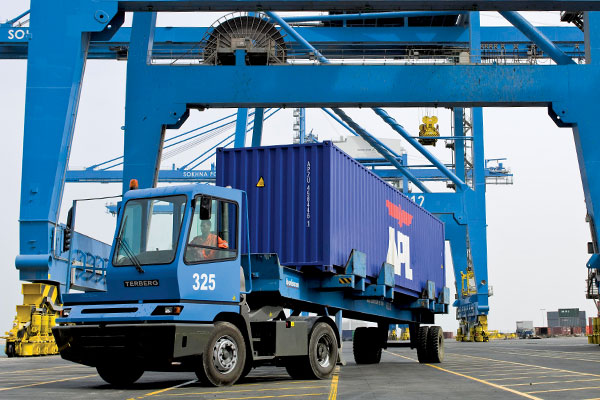 The 2011 revolution in Egypt and eventual overthrow of President Hosni Mubarek’s regime reminded global shippers how quickly political undercurrents can gnarl supply chains. Rumors persist about a closure at the Suez Canal, extended delays at nearby ports, and a shortage of ocean capacity between Asia and Europe as a consequence.

Agility Logistics, which has a strong presence in the region, has been following the situation intently. At the height of civil unrest in early February 2011, and before Mubarek’s abdication, Agility reported that the Suez Canal was open and operating at full capacity, while Port Said and Alexandria were both closed and Damietta was operating at lower productivity —largely due to martial law.

Containerships currently account for 55 percent of net tonnage and 38 percent of the total number of vessels transiting the Suez Canal, according to a report by Alphaliner, a global ocean-shipping consultant. The high tonnage share of the containership transit is due to the larger-size container vessels that pass through the Canal compared to other vessel types.

Even with a sense of temporary stability as the Egyptian people, government, and military work out details of the country’s future, shippers and ocean liners should consider alternative routings —for example, ships circumnavigating the Cape of Good Hope at a cost of seven additional days of transit time, according to Alphaliner.

The Panama Canal expansion referendum and current construction has attracted a lot of attention from U.S. ports, logistics companies, and shippers that have stakes in adding capacity and aligning distribution networks to a bigger trade flow between the Pacific and Atlantic oceans. China has an interest, too.

The country has been slowly entering the Latin American market— Brazil and Venezuela, notably— to source raw materials and create supply lines for its domestic construction boom. Now China is considering a new transportation connection that could compete with the Panama Canal.

Beijing officials have engaged in talks with Colombian President Juan Manuel Santos to discuss the feasibility of building a rail link from Cartagena in the Caribbean to the country’s Pacific coast 280 miles away.

The railway would facilitate the export of raw materials such as coal, as well as open the way for Chinese imports. Early reports suggest that China is serious about the initiative, and that investment would be justified by the ease of moving freight in and out of Colombia and Latin America.

China is no stranger to executing big infrastructure projects. The Three Gorges hydroelectric dam, completed in 2006, was finished on time and under budget— without the bureaucracy and red tape that had many international observers questioning the social, cultural, and environmental implications of such an undertaking. China had control over that. Colombia will likely demand few concessions from a country that is willing to invest significant capital in transportation infrastructure that benefits both.

Whether or not a dry canal comes to pass, Colombia is using this project as leverage to press the United States into ratifying a free trade agreement that has been swimming in uncertainty for years. Colombia has its own human rights, safety, and security issues. But this recent development— with a heavy lift from China— might push the United States to a decision.

In his 2011 State of the Union address, President Obama specifically mentioned pursuing a free trade agreement with Colombia: “Before I took office, I made it clear that we would enforce our trade agreements, and that I would only sign deals that keep faith with American workers and promote American jobs,” he said. “That’s what we did with Korea and that’s what I intend to do as we pursue agreements with Panama and Colombia, and continue our Asia Pacific and global trade talks.”

Internet sales in Latin America have grown at a compounded rate of 30 to 40 percent for the last five years, says Francisco Ceballos, country manager at MercadoLibre Mexico, a Brazilian e-commerce and auction Web site. With more affordable Web-browsing options, consumers are becoming more sophisticated online shoppers— and this progression is shaping a new retail experience, especially in Mexico.

Mexico’s e-commerce market, valued at about $2.7 billion, is up 30 percent since 2009 and currently comprises about 1.5 percent of the country’s overall retail sales. But with fast-growing Internet access, improved payment methods, and better logistics services, this number will approach 10 percent within the next few years— on par with the United States and Europe, Ceballos says. To ensure growth, retailers in the region must focus on improving the online shopping experience.

Cultural and economic ties between the United States and the Netherlands date back to the early 1600s and the foundation of New Amsterdam (New York)— and they continue to pay dividends in terms of exports, imports, and job creation in both countries, according to a recent report by the Dutch Embassy.

The Dutch are the third-largest investors ($237.9 billion) in the United States; and the Netherlands is the number-one destination for U.S. investments worldwide ($471.5 billion).

Investment from and trade with the Netherlands supports more than 700,000 American jobs today. What is most striking? The top three states benefiting are Texas, California, and Massachusetts. Where is New York?

While New York ranks fifth for jobs supported by Dutch industry and exports to the Netherlands, New York City ranks first among the top 20 cities that trade with the Netherlands.

The United Arab Emirates (UAE) will soon start accepting and issuing ATA Carnets, making the federation the 69th country to join the worldwide system for duty-free, tax-free temporary imports, according to the United States Council for International Business.

ATA Carnets are merchandise passports that permit tariff-exempt exports. In 2009, more than 150,000 Carnets were issued, covering product worth more than $17 billion.

The UAE will begin accepting goods for trade shows and fairs— an important first step in linking UAE businesses to a wider global marketplace. With 200 trade shows annually in Dubai, the country’s acceptance of Carnets will likely be a boon for U.S. companies from all industries.

Athens International Airport (AIA) and COSCO-owned Piraeus Container Terminal recently agreed to establish a link between the Port of Piraeus and the airport, and to develop future cargo flows. The airport benefits from working agreements with both port terminal operators. A bridge between the port and the airport is already operated by direct truck-shuttle service.

AIA is one of a few European airports that have developed such specific multi-modal traffic, incorporating faster simplified Customs procedures and handling processes. The new agreement opens the door to steady flows of inbound air and sea traffic. Much of this cargo is destined for the United States, but the airport is also expanding traffic flows into Balkan countries where airports are often too small to accept cargo flights.

Mongolia On the Move

With China’s explosive growth and ongoing discussions about building overland infrastructure between Asia and Europe to support trade demand, Mongolia falls squarely in the middle. Move One Logistics, a Dubai-based 3PL, recently expanded services in Mongolia by opening a warehouse in Ulaanbaatar. The warehouse has the capacity to provide 24/7 access to road freight, with additional services including storage, packaging, crating, shrink-wrapping, labeling, proof counting of purchase orders, and materials handling.

China’s success is having a similar impact on Mongolia’s own economic prospects. The country is rich with natural resources, home to some of the world’s largest untapped copper, gold, coal, and uranium reserves. Mongolia has already attracted investment from foreign mining companies such as Australian giant Rio Tinto and Canadian-based SouthGobi Resources.