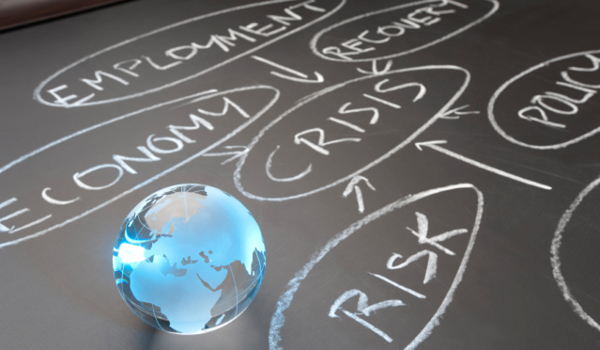 Global trade disruptions come in all shapes and sizes, and can wreak havoc on supply chains. Find out what proactive strategies and tactics leading companies use to tackle the escalating challenge of supply chain risk management.

Global trade is not for the faint of heart; disruption is the new normal. It comes at companies from all quarters—political, digital, physical, social, and economic. And because supply chains are now symbiotically intertwined, it can wreak havoc on companies up and down the extended commercial ecosystem.

Take global trade policy, for example. The North American Free Trade Agreement, in place since 1993, is now up for grabs, with the United States threatening to withdraw from the accord. This raises the long-dormant specter of retaliatory tariffs between the United States and Mexico, on a host of manufactured goods.

On the other side of the world, President Trump pulled out of the Trans-Pacific Partnership (TPP), scuttling negotiated provisions that guaranteed, among other things, eight years of patent protection exclusivity for biologic pharmaceuticals—a protective deal worth billions of dollars to the drug industry.

And then there's the new threat on the block for supply chains: ransomware. The NotPetya digital attack on Maersk and its subsidiary Damco in summer 2017 paralyzed the company for days and cost it an estimated $300 million. For the first time, the supply chain was the specific target of large-scale digital crime.

So, what are companies doing about managing supply chain disruption? In short, they've gone on the offensive to proactively control and mitigate their risks. 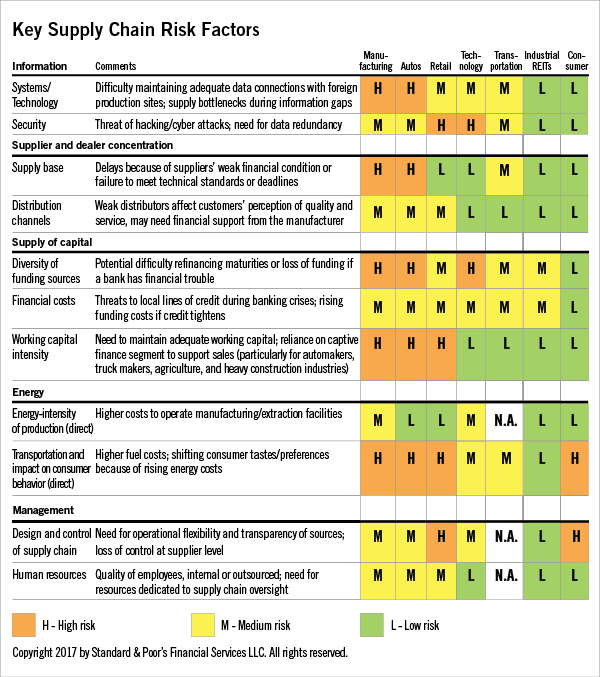 Harness Visibility: What's Moving and Where?

One of the first actions companies take is to improve their supply chain visibility—to understand and track exactly what's moving and where.

A case in point is Deckers Brands, the global footwear company best known for its Ugg product line. The fashion footwear company had always contracted directly with steamship lines for service. It had agreements with four container lines, sourcing product throughout the world and heavily in Asia.

However, Deckers managed its carriers and cargo manually using spreadsheets. It had no overarching visibility into its freight flows and volumes. This lack of visibility posed a risk, management believed.

Deckers understood it needed a transportation management system (TMS) in order to gain the visibility it wanted. But the company chose not to invest in a TMS itself. Instead, it contracted with a major global freight forwarder to handle its ocean freight via its TMS.

"We now have access to 14 steamship lines," thereby significantly increasing transportation options in the event of a disruption, says Karina Heistuman, the company's director of global trade logistics, "And we also have full visibility into our freight movements." 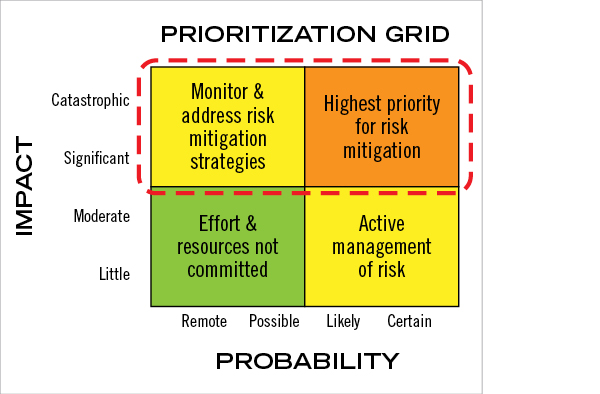 Proving the Value of a Global TMS

The 2015 chemical explosions at the Port of Tianjin, China, proved the value of Deckers' access to a global TMS. In that disaster, a series of massive explosions and resulting fires killed 173 people and injured hundreds of others at a container storage station at the port. The fires burned uncontrollably for several days, causing at least eight additional explosions.

Deckers ships considerable volume through Tianjin, but was unaffected by the disaster. "Our forwarder was able to redirect our freight, thanks to the visibility it has into all our flows," Heistuman recalls. "We would not have been able to do that with our old manual system."

General Motors has taken its reliance on visibility a step further. The company learned a painful lesson in the 2011 Fukushima, Japan, tsunami-nuclear catastrophe. "It took GM six weeks to recover from that disaster," says Gary Lynch, president of The Risk Project and author of three books on risk management. "In the 2016 Japan earthquake, GM cut that recovery time down to six days."

What made the difference? Technology. According to Lynch, GM and its suppliers participate in a shared information platform that provides visibility into the bills of material, inventory levels, material flows, production schedules, and more. GM also shares an event monitoring service with its suppliers that tracks everything from fires and floods to labor shutdowns and congestion.

"Based on this ongoing information-sharing and event monitoring, you can then use predictive analytics to calculate the financial impact of various types of supply chain disruption," Lynch explains. "You can use the results to inform smart risk management decisions."

Key to effectively managing disruption and risk is combining all the different "views" into a single picture, and making decisions based on that 360-degree picture. As Lynch explains, "People in the supply chain focus on the supply chain. Manufacturing focuses on the factory. Insurers focus on loss of insured assets or business interruption. The CEO focuses on market position impact and financials. This all needs to come together in a single picture. You can't afford to operate in siloes."

Managing global trade hiccups takes planning—a lot of it. "In fact," says Heistuman, "it's the only way to get through a supply chain disruption."

For example, several years ago, the ILWU labor contract for West Coast ports was up for renegotiation. A potential strike would put Deckers' business at risk. So about nine months prior to the start of contract negotiations, Deckers' management team sat down and developed an alternate supply chain plan that involved diverting imports from Los Angeles-Long Beach to Prince Rupert, British Columbia, Savannah, and New York-New Jersey. Decker activated this Plan B eight months before the contract's expiration.

At the time, Decker was contracting directly with five steamship lines. "That gave us the flexibility to use various ports," Heistuman notes. "We still committed the same overall contract volumes to the carriers, but we just switched it to other ports."

Diverting to other ports was more expensive. "Our carriers thought we were overreacting, diverting freight so far in advance," she continues. "But it turns out we were not—and our decision paid off. Our customers got their goods with no service interruption. Other companies had their containers stuck on vessels for days."

The challenge in creating a disruption strategy that is proactive rather than reactive, is making smart decisions when it comes to cost-benefit tradeoffs. "Obviously, there's a cost to being proactive," says David Broering, senior vice president, integrated solutions, NFI Industries. "The key is balancing the cost-benefit equation properly."

Service-level agreements (SLAs) with customers can make this cost-benefit analysis relatively simple. Broering explains: "If your customer is Walmart, and your SLA stipulates that Walmart can charge you x percent of the invoice value if you deliver late, then you can decide whether expediting your freight by air is worth it. The ROI conversation is very straightforward."

But when you're a supplier of a supplier, farther up the manufacturing food chain, the calculation gets trickier. "At this point," Broering advises, "you have to figure out the cost of potentially eroding your customer's confidence in your company as a supplier. You have to calculate the potential financial risk to your business of a service failure."

Building an optimized supply chain risk management strategy and tactics— the kind to which the NFI senior vice president refers—is a two-step process:

1. Redundancy. Although often an expensive form of mitigation, this strategy is well understood and used to mitigate many forms of business risks. Building redundant computing and IT infrastructure is one such example.

2. Contingency. This strategy establishes well-thought-out contingent operating plans for potential disruptions. The plans provide for training all personnel in how to execute them.

3. Policy. One of the most effective mitigation strategies is simply to change an operating procedure or policy. Deckers, for example, diversified its global supplier base to spread production around the world. "Our goal was to mitigate any impact from growing labor unrest in China, where we'd traditionally sourced extensively," says Heistuman.

Best practice supply chains understand one point very clearly: Disruption/risk management is not a project. "That's one of the most common big mistakes companies make— viewing supply chain risk management as a project," says Sharpe. "You can't afford to look once a year at your risks. The world changes too fast."

Instead, leading companies monitor and manage risk all the time. And they use data, visibility, and analytics to make smarter decisions about prioritizing their efforts and resources.

"Certainly, this is a function of the market value proposition at risk," he adds. "But every company should have a living disruption strategy and plan."

Related Articles
Who Are You Doing Business With?Use Supply Chain Modeling to Mitigate Port Shutdowns and Other RisksIncoterms: Playing by the RulesRedefining Globalism?Global Logistics—March 2017Enabling a Faster-to-Market SolutionHow to Reap the Benefits of Asian Free Trade AgreementsTesting the Quality of Logistics-Critical ApplicationsHow to Meet Global Shipment Compliance ChallengesJonathan Parks: Planning is Key, to Say the Leased More related articles...