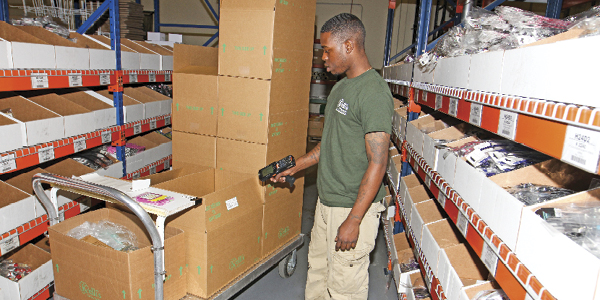 Kelli's Gift Shop Suppliers, a wholesale distributor specializing in hospital gift stores, handled picking and packing the old-fashioned way for more than one decade after its founding.

Workers carried pen and paper, making carbon copies of orders—one sheet used as the customer's packing slip, the other sent to Kelli's accounting department for invoicing.

The system was less than efficient, especially for a growing business.

"We employed an extremely manual process, and because of that, we were also not using real-time inventory," says Kelli's President Justin Cohen, whose parents, Mike and Lori Cohen, started the business in 1999 as a division of a hospital gift shop chain that they ran. The lack of real-time inventory tracking meant that pickers often were sent to empty bins, resulting in wasted labor.

Operations changed dramatically in 2013, when Kelli's, based outside Dallas in Carrollton, Texas, started using handheld XG105 computers from Janam Technologies LLC of Woodbury, N.Y. In 2015, the gift wholesaler upgraded to Janam's faster, lighter, and more powerful XG3 model, a gun-shaped mobile device with long battery life and the ability to withstand 6-foot drops to concrete.

The technology "greatly improved efficiencies and productivity. It also significantly improved accuracy," Cohen says. "Because we're a distributor, inventory is one of our biggest assets. The technology allowed us to have much better control over our inventory and provide better customer satisfaction."

In addition to hospital shops, Kelli's supplies mom-and-pop pharmacies, casinos, and other small gift retailers, and is breaking into the airport and hotel gift shop markets.

The company, which acquired the American Treats hospital gift shop division in 2015, sells more than 4,000 items from 700-plus vendors. Its employees scan approximately 20,000 items each day.

Lori and Mike Cohen, who in the early 1980s had started a hospital gift shop operation that became the nation's largest such chain, sold the business in 2001, breaking Kelli's off as a separate enterprise.

Today, Kelli's is the largest wholesale distributor in the nation specializing in sales to hospital gift shops. The operation employs 15 pickers who work from 7 a.m. to 3:30 p.m., and eight people who work on a receiving, replenishment, and put-away shift, from 4 p.m. to 12:30 a.m., in addition to several sales, customer service, and accounting employees.

When the company looked to add automation, it turned to local dealer Texas Barcode Systems. The dealer's salesman showed Cohen the XG105. "The devices were priced fairly compared to some of the competition," Cohen says.

Price wasn't the only consideration. A customer service-oriented business such as Kelli's, which promises next-business-day shipping, appreciated the same kind of attention from its hardware vendor.

"The customer service has been fabulous," Cohen says, noting that Janam sent developers down twice, at Janam's expense, to work through the initial process and issues.

"That was a big factor for us when comparing Janam with its competitors," he says. "They were extremely responsive to our needs and that was something we don't find with other vendors."

Kelli's started testing the Janam XG105 in 2013, and late that year adopted a customized warehouse management system (WMS) that was developed by one of the distributor's vendors.

"The devices represent a huge technology change; they didn't just improve the way we manage the warehouse," he says. The mobile devices also improved accounting management, according to Cohen, who explains that an accounting employee previously had to key in the items that had been picked.

Workers now use an RF gun to scan in items. Product data is then sent to the WMS, resulting in considerable time savings. The solution supports more efficient warehouse activity.

"The technology allows us to have more efficiencies and economies of scale," Cohen says. "With every transaction we're talking to the system, so the faster radio allows the pickers to move between bins more rapidly."

Because of the ability to track inventory accurately by bin location, Kelli's has reduced the amount of replenishment that workers do for the next day's shipments by approximately 20 percent, as they concentrate labor only on the bins where items are needed. "Before the WMS, we would replenish based on visual inventory and may have spent time replenishing a bin where no commitments were present," Cohen says.

The Janam XG3 runs Microsoft Windows Embedded Handheld 6.5, and Kelli's WMS was built on a platform to run on Windows Handheld.

The Janam device allows workers to scan and assign items to specific cartons and produce an itemized packing list. In addition to working faster than the XG105, the newer XG3's battery doesn't have to be swapped out as often. "We get a full eight-hour shift out of one battery," Cohen says.

Automation has helped Kelli's grow aggressively without adding much headcount, and the distributor's customers say automation has made their lives easier, too.

Customers can check on packages more easily than they could before the wholesaler purchased Janam devices because now they can find out specifically which carton in a shipment contains the plush bear or baby outfit that gift shop employees—typically older volunteers in hospital shops—can't find in their orders.

An average order contains at least 25 different items in multiple cartons. Previously, the company didn't indicate which items were in which boxes, Cohen says. Now, if a customer calls about a missing item, Kelli's can pinpoint which carton contains it.

More companies like Kelli's have reached the point where they see the widespread use of mobile devices and are ready to use it in their businesses, observes Doug Lloyd, Janam's vice president for sales operations.

"The growth market is in the small to mid-size enterprises," Lloyd notes. "The ubiquitous nature of applications is now transferring down further and deeper into this business market."

The longer lifecycle of the devices is a key consideration. "Business decision makers want to amortize that investment over years, not months," Lloyd notes. Users typically get about three years from the product, although some remain on Janam devices for eight or nine years, according to Lloyd.

While most Janam devices operate in warehouses, the company has 1,000 units in UK hospitals to help track blood and breast milk.

The company likely has a long-time customer in Kelli's Gift Shop Suppliers. The wholesaler reports improved processes in its distribution centers, and no immediate plans to upgrade its mobile devices.