Joplin is Rebuilding and Open for Business 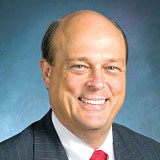 Rob O'Brian is president of the Joplin Area Chamber of Commerce in Joplin, Mo., and the region's lead economic developer, (417) 624-4150

On May 22, 2011, the most devastating, deadly single U.S. tornado in six decades ripped through the city of Joplin, Missouri and the neighboring village of Duquesne. With winds of nearly 300 miles per hour, the tornado carved a path 10 miles long and nearly one mile wide through the two communities.

The death toll reached 161 and more than 900 people were injured, many critically. Nearly 4,500 housing units were destroyed and 9,000 people were displaced for the long term. Also destroyed were Joplin's high school, technical school, new middle school, and two elementary schools. The Catholic elementary school was also demolished. These buildings housed half of each system's students.

Destroyed or severely damaged were more than 500 places of employment—from St. John's Regional Medical Center with more than 2,000 employees, to dozens of medical offices, big box retailers, and scores of small, local firms. More than 5,000 job positions were impacted. The storm was a staggering blow to the 52,000 people of Joplin and Duquesne.

And yet, within minutes, our other regional hospital, Freeman Health System, and a St. John's triage center were treating the hundreds of injured. Within 36 hours, the Joplin emergency and public works crews, with help from our great neighboring communities, had all 107 miles of streets in the devastated area completely opened for rescue crews.

Within one week, St. John's opened in a 60-bed tent hospital that is now transitioning to a full-service, 100-bed "permanent unit." St. John's has already announced a location for a new $500-million, 400-bed state-of-the-art medical center.

Perhaps the biggest miracle was the Joplin Public Schools. Helped by local, committed contractors, the schools' leadership team fulfilled the promise made the day after the storm: that school would start on time. Today, 98 percent of the students are back and more show up each day. The Catholic elementary school opened in a temporary location on-time, as well.

The 9,000 people displaced for the long term are still in the area, still committed to living here, and either already in new quarters or ready to rebuild.

We have seen an extraordinary effort from our business community. Of the 523 businesses and medical practices directly in the path, nearly 400 are already reopened at existing, new, or temporary locations. Most have gone the extra mile to keep their employees on payroll as well.

This miraculous recovery would not be possible without so much help from the federal and state government, and from so many of you. Nearly 200,000 volunteers have come to our community. They helped find shelter for those without homes, provided tons of food and material, and removed debris. Millions of dollars in donations have come from so many others, as well.

There is a long road to recovery still ahead and people continue to ask how to best direct their help. For monetary donations, there is Rebuild Joplin, which lists six key local organizations that are working on long-term recovery. Specifically included in the six key local groups is the Joplin Area Chamber of Commerce Foundation Business Recovery Fund.

We still grieve for the victims and their families, but our communities are not victims. We have found the courage in our own hearts and the kindness of thousands of Americans. Thanks to your support and the indomitable spirit of the people in Joplin, Duquesne, and our region, we will be back stronger than ever.