Kicking the Tires on an IoT Solution 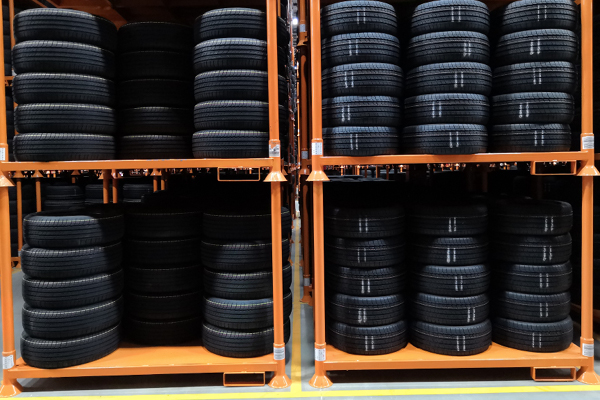 Tire manufacturer Michelin is a shipper with a massive global footprint and complex demands. With headquarters in Clermont-Ferrand, France, Michelin operates 121 production facilities in 17 countries; those facilities produced approximately 190 million tires in 2017. With a presence in 170 countries, distributing products across the globe is a challenging and sophisticated operation.

THE CUSTOMER
Michelin North America is a $10.8-billion company that manufactures and sells tires for airplanes, cars, farm equipment, heavy duty trucks, motorcycles, and bicycles. It produces finished goods in 16 plants, while two sites produce retreads for the trucking industry and one site produces retreads for the aircraft industry.

THE PROVIDER
Sigfox is a French global network operator that builds wireless networks to connect low-power objects such as electricity meters and smartwatches, which need to be continuously on and emitting small amounts of data.

One chief distribution method is moving supplies by sea in shipping containers. The company holds contracts with the container providers, but those providers then rely on subcontractors to manage delivery of the containers from one location to another.

In the past, Michelin received an estimated date of arrival and notification when a shipment had reached its destination, but that was the extent of visibility to its container shipments. Some shipments could take as long as four months during which time Michelin would have no view of where its tires were. Managing the distribution of millions of tires without always knowing their location was far from ideal.

Replenishing the supply of tires for customers without clear shipment visibility was “a big pain point,” says Pascal Zammit, director of connected mobility solutions at Michelin, particularly when inventory was tight.

As an example of the associated challenges, Zammit points to Michelin’s work supplying specialty tires to vehicles used by mining companies, which depend on the tires to keep operations running. Late deliveries and uncertain shipping processes threatened to cause major problems for Michelin’s customers.

In an effort to improve shipment tracking, Michelin approached Sigfox, a France-based Internet of Things (IoT) service provider founded in 2010.

“Michelin had no visibility and no control,” recalls Laetitia Jay, chief marketing officer for Sigfox. “They had to rely on information provided through a contractor. So they came to us looking for a track-and-trace application to see their shipments.”

Available in 65 countries, Sigfox’s 0G solution is a low-bandwidth dedicated network that is managed in the cloud rather than on devices. The solution enables the cost-effective transfer of small amounts of critical data at a low cost, helping to reduce the expense of using IoT technology tools.

In 2017, Sigfox teamed with Michelin and Argon Consulting, an international consulting firm based in Paris, to develop a trial in which simple, low-energy-consuming IoT sensors connected to Sigfox’s network were placed in two containers carrying Michelin supplies.

The trial proved successful in unexpected ways. While intended to help Michelin better understand where shipments were located during distribution, the trial also revealed important inefficiencies.

For example, one container took a suboptimal route that cost valuable time while another container sat in a harbor for weeks without moving and arrived late at its destination. Tracking the shipments not only provided visibility but also important insights into possible improvements in shipping.

The success of the initial test prompted the development of a larger trial involving 200 containers. This trial demonstrated a range of measurable benefits. In particular, Michelin reduced transit stock by 10% by scheduling real-time alerts about delays and transport conditions. The IoT sensors and 0G network also increased the accuracy of estimated arrival times by 40%.

Improved visibility netted Michelin new advantages, including a better foundation for planning, Zammit says. By tracking a shipment throughout its route, Michelin could more confidently determine how to plan for the shipment’s arrival at its destination, removing the uncertainty that had been a consistent challenge in the past. Instead of deciding where a shipment would be distributed four months before it reached land, better visibility allowed Michelin to be more strategic in how it allocated supplies once they arrived at their initial destination and to optimize their distribution.

“If we know exactly where a shipment is we can decide at the last moment where to send a supply and how,” Zammit says.

The improved visibility helped reduce instances when late shipments might cause Michelin to scramble to fill emergency orders for customers. Sigfox focuses on the business case for a solution—rather than starting with the technological solution—and hones in on critical key performance indicators. With the better visibility afforded by the collaboration with Sigfox and Argon Consulting, Michelin saw improvements that have “a direct impact on customer satisfaction,” Jay says.

“This solution is about business and it’s about money,” she says. “It’s about reducing costs, helping to prepare for emergencies, and being able to better anticipate when shipments will arrive at their destinations.”

The Sigfox solution was also cost-effective because the technology was not unnecessarily sophisticated for the task at hand—tracking basic information about shipments over a long haul. A more robust 5G network would offer capacity that Michelin would never use and come at a much higher price. A solution that is too expensive for its job destroys its value and return on investment.

“You don’t need to use the most robust technology to track shipments,” Zammit says. “You need an affordable solution that can do the job and provide the information that you need.”

Michelin, Sigfox, and Argon Consulting recognized that other companies would be interested in replicating their success in improving the visibility of international shipments in a low-cost manner. They collaborated to create a joint venture called Safecube, which commercialized the intercontinental tracking solution and made it available to other shippers. Safecube launched in spring 2019.

Many shippers move goods whose container-by-container value does not justify the use of an expensive tracking solution. Safecube combines Sigfox’s 0G network with low-power IoT sensors that require little expense or upkeep. Its complete solution also includes dashboarding and monitoring management software tools.

“The solution uses a limited amount of data, so we don’t waste money in the communication,” says Waël Cheaib, founder and CEO of Safecube. “Our devices are simple and frugal and can be used one shipment after another.”

Plans up in the air

Safecube currently focuses on shipments that travel by sea, but plans to eventually work with companies on air shipment visibility.

“From an industrial point of view, maritime flows are among the most complex and the least controlled within the supply chain,” says Fabrice Bonneau, CEO of Argon Consulting. “Some key challenges are poorly optimized routes, lack of visibility, and administrative complexity linked to the large number of players in this space.”

In addition to simple location tracking, Safecube solutions monitor basic conditions during transport, such as temperature, humidity, and shocks, to ensure goods travel in a suitable climate.

“For many businesses, it’s crucial to monitor the condition of goods during shipment,” Cheaib says. “That’s something we will be able to do with the Safecube solution.”

Michelin wanted to strengthen its visibility into maritime shipments so that it could better track its goods and plan for their arrival at their destinations. The tire company needed a solution that could provide accurate data at a low cost.

In a large-scale trial in 200 shipping containers, Michelin saw its visibility of its products in distribution improve dramatically. As a result, Michelin reduced transit stock by 10 percent by scheduling real-time alerts about delays and transport conditions. The sensors and 0G network also increased the accuracy of estimated time of arrival by 40 percent. Michelin also gained insight into inefficiencies in the routing of shipments by subcontractors.

Michelin, Sigfox and Argon Consulting teamed to form a joint venture called Safecube to commercialize a solution based on their successful efforts with Michelin’s shipments. Safecube’s solution will locate shipments and track their transport conditions in real time for shippers.