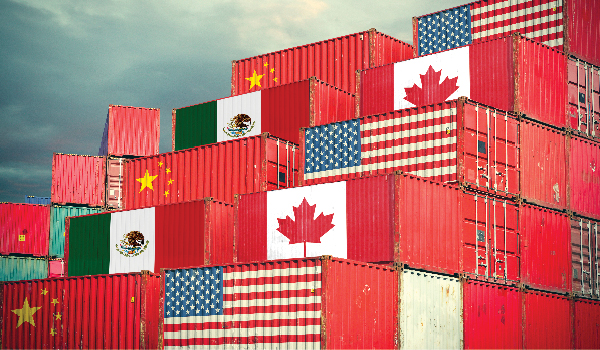 Should you offshore, nearshore, or reshore? It helps to understand how each model impacts the supply chain before you ante up.

In the late 1990s, Mitchell Metal Products, a metal products manufacturer based in Merrill, Wisconsin, licensed production of its wreath rings—which hobbyists use as the base for decorative wreaths—to a manufacturer in the United Kingdom. The goal was to locate finished products nearer to customers in the UK and Europe.

"That strategy was successful for about eight years," says Tim Zimmerman, president of Mitchell Metal.

In 2008, the British pound strengthened; at various points during the year, it zoomed to more than twice the U.S. dollar. (In comparison, as of mid-May 2018, the pound was worth about $1.35.) "The cost of production in the UK, along with shipping to mainland Europe, became too costly," Zimmerman recalls.

So he brought production back to the United States. The move afforded Zimmerman and his colleagues a more complete understanding of some previously "hidden" costs they had incurred by shifting production offshore. These included the cost and time required to provide tech support and replacement parts for production equipment from a continent away. Once these expenses no longer hit the books, their absence became highly visible, Zimmerman says.

Like Mitchell Metal Products, companies continually evaluate where they can most cost-effectively manufacture their products, especially as many of the lower wage rates that drove organizations to offshore production in the 1980s and 1990s have steadily risen.

One example: between 2006 and 2016, average wages in China more than doubled, according to the Global Wage Report, 2016/2017, a publication of the International Labour Organization.

A greater understanding of the impact of shoring decisions is prompting some companies to take a more all-encompassing look at their strategies. For instance, many are assessing the potential sales lost when they can't modify products manufactured far from their customer base quickly enough to keep pace with changing consumer preferences.

Companies are asking which "shoring" option makes the most sense: Is it offshoring, or producing in countries that offer lower wage rates, even if they're on the other side of the globe? Should they nearshore, or move production to countries that are close to the company's domestic base, yet can offer lower costs? Will reshoring, or bringing production back to the company's home country, offer the most benefit? Each approach will impact supply chains in different ways.

Even as companies scrutinize the costs and benefits of offshoring, the practice remains strong. Between 2010 and 2014, sales in China—the largest destination for U.S. firms looking to offshore—by foreign affiliates of U.S. multinationals jumped from $107 billion to $204 billion, according to the U.S. International Trade Commission.

Challenges remain, however. Quality can be one, says Anthony Urbaites, senior principal with consulting firm The Keystone Group. While the largest manufacturers can employ rigorous processes to meet quality standards, less-sophisticated manufacturers aren't always able to put those systems in place, he notes.

When products contain components sourced from around the globe, the complexity of the supply chain becomes "extreme," says Bill Conerly with Conerly Consulting. These longer supply chains need to incorporate flexibility to handle emergencies, such as floods that slow the ships transporting goods. Two obvious solutions—padding the schedule or holding more inventory—are expensive, he notes.

Companies also need to consider differences in culture, time zones, and language. "I don't think anyone has perfected this," Conerly says.

Given the challenges inherent in offshoring, nearshoring can seem like an optimal compromise, as it promises lower wage rates, while keeping production operations closer to home. "Shortening the supply chain reduces risk," Conerly says, as products spend less time in transit. In addition, nearshoring can minimize delays that can occur when operations are scattered across the globe.

More than two-thirds of respondents to an Alix Partners 2016 survey of manufacturing companies serving North America and western Europe say they would consider nearshoring to meet U.S. and European demand. That's up from 40 percent one year earlier.

At the same time, nearshoring can bring its own set of challenges. Even when the nearshore country is next to a company's base of operations, labor laws and customs, as well as the culture, differ. Securing quality products also can be a challenge.

A few tactics can improve offshoring and nearshoring operations. Urbaites recommends companies focus on products that are less complex and made in higher volume. That reduces the likelihood they'll have to address thorny technical problems from far away.

Communication is key. Original equipment manufacturers (OEMs) sometimes ask Christen Holmberg, director of sales and marketing with Jefferson Rubber Works, a Worcester, Massachusetts-based supplier, to manage vendors overseas. Before production starts, Holmberg initiates an "in-depth conversation" with the customer to pinpoint how the product will be used and in what environment.

Jefferson obtains documentation on the material to be used, as well as samples it can test to ensure it meets performance criteria. These steps "keep everyone honest," Holmberg says.

Patrick Ven den Bossche, partner and expert in global supply chain strategies with A.T. Kearney, works with clients on "trade war gaming" to identify how different changes will impact supply chains that incorporate offshored or nearshored production. For instance, an organization can assess how different increases in oil prices will affect transportation costs.

The Pull of Reshoring

Given the challenges inherent in both offshoring and nearshoring, reshoring can make sense in some cases.

When Zimmerman of Mitchell Metal Products talks with potential customers that are debating between his firm and an offshore competitor, he helps them identify all the expenses they can expect to incur from offshoring. He includes those that aren't initially apparent, such as the time consumed by making an engineering change when the manufacturer is across the globe.

"Generally, 30 percent of the time we go up against an offshore business, we're able to justify bringing the work here," he says.

Returning to Home Base

Jefferson Rubber Works is seeing an uptick in opportunities from companies that want the firm to quote production domestically, even when they had been manufacturing outside the United States, Holmberg says.

The reasons for the shift? "The complexity, the lead time, and the difficulty managing specifications and quality" from thousands of miles away, he says.

In 2013, the market in which Jefferson competes was split, with approximately 80 percent of its products manufactured overseas and 20 percent domestically, Holmberg says. Today, the breakdown is about 70/30. In five years, it may be closer to 50/50, he adds. Key to this happening will be increasing the use of automation and robotics to chip away at differing labor costs.

A key benefit of reshoring is flexibility. If a company decides to change a model or style, it's easier to handle this when its operations are nearby, Conerly says. And by establishing a domestic presence to serve domestic customers, companies typically can carry less inventory.

At the same time, reshoring brings its own set of challenges. One is finding the right skilled labor. "For the past 15 years, parents have not sent their kids to school to learn manufacturing," Van den Bossche notes.

The situation should improve in another decade, given efforts to promote STEM (science, technology, engineering, and math) classes, as well as the work of many community colleges to offer courses that will help prepare students for jobs with nearby companies.

In addition, the growing automation of many factory functions is helping manufacturing shed its image of "being a bunch of dirty jobs," Van den Bossche says. "The new plants are gleaming and shiny."

Another critical reshoring issue is "securing the supply chain for raw material," Holmberg says. In some cases, tighter regulations in the United States mean companies can't use the same materials they used elsewhere. Instead, they must find alternatives the Environmental Protection Agency considers safe.

Price remains a concern, as not all companies will pay a premium for products produced domestically. Those that do often say quality customer service and rapid responses are more valuable than a modest cost difference.

Shore Up Your Knowledge

From supply chain benefits to sourcing hurdles, here are the basics of offshoring, nearshoring, and reshoring.

Moving a business operation to a nearby country, especially in preference to a more distant one.

Moving a business operation that was moved overseas back to the country from which it was originally relocated.

Some companies deciding whether or not to offshore production operations focus on the most visible costs, such as labor rates. While that's a logical first step, the decision to offshore impacts many other costs. Of the companies that run the numbers on all costs, both visible and hidden, about 25 percent end up reshoring, says Harry Moser, founder of the Reshoring Initiative, which promotes reshoring, insourcing, and foreign direct investment, among other sourcing options, and provides tools and support for companies evaluating sourcing locations.

Moser works with companies to highlight the many costs inherent in offshoring, including those that aren't highly visible. They include the following: