Negotiating Ocean Contracts That Will Float Your Boat 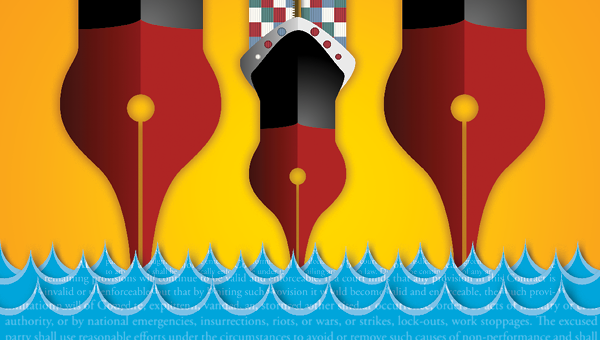 Ocean contracts are notoriously complicated. What can shippers do to help ensure the contract they sign is win-win?

Ocean carrier contracts are complex. Dozens of carriers serve myriad trade lanes, and the format and content of each carrier's contract is unique. Every carrier applies a multitude of surcharges in various ways; in fact, more than 350 different surcharges are applied worldwide, according to some estimates.

"Ocean contracts are complex because they must be comprehensive," explains Dan Jakubauskas, vice president of pricing and procurement at Yusen Logistics Americas Inc., a logistics and freight forwarding company with U.S. headquarters in Secaucus, N.J. "Carriers tend to account for all contingencies.

"Rates and surcharges, in particular, can be very complicated, with extensive exclusions and exceptions," he adds. "And each carrier uses different systems, structures, and rates."

The complexity of ocean contracts puts the onus on shippers to negotiate carefully or risk being locked into an unsatisfactory arrangement for one year or longer. The good news: both shippers and ocean carriers are looking for contracts that are more stable and simple, and they have been working together to come up with new approaches that benefit both sides.

When negotiating an ocean contract, striking a balance is critical. Both shippers and carriers must feel they are getting a fair deal in order for the relationship to go smoothly.

"Relationships can turn bad if contracted rates are too high, or market conditions are too low," says Joerg Twachtmann, global head of product and procurement, ocean FCL, for ocean forwarder Panalpina. "To keep both sides happy, we review our ocean contracts and terms quarterly to determine whether we need to adjust the figures so no one is locked in at rates that are too high."

But it is the shippers' responsibility to do their homework prior to negotiations. "Ocean carrier contracts contain a lot of verbiage written to the carriers' advantage," warns Howard Finkel, executive vice president of COSCO Container Lines Americas, a full-service intermodal ocean carrier with U.S. headquarters in Secaucus, N.J.

When negotiating ocean freight contracts, shippers first must decide which type of contract to pursue: long-term, short-term, or index-linked. Each carries benefits and drawbacks.

But shippers under long-term contracts can suffer during periods of rate volatility. "Because of great volatility in the current market, container shippers face major challenges when entering contractual relationships," says Martin Dixon, development manager at maritime consultancy firm Drewry Shipping Consultants. "That volatility will continue for years to come."

"Short-term contracts are a smart way to go," notes Stefan Weber, head of ocean procurement for Damco North America, a global freight forwarder, supply chain management company, and non-vessel-operating common carrier. "Shippers don't have to lock in a long-term rate when they are uncertain about what might happen down the road."

In addition, some shippers use freight forwarders and pay spot market rates, which are often lower than contract rates.

Index-linked contracts. Index-linked contracts, which enable the contract rate to fluctuate relative to an external index, are growing in popularity. The concept emerged in 2012, after a number of shippers involved in trans-Pacific trade got caught up in a peak-season capacity crunch.

"More frequently, shippers are considering index-linked contracts during periods of significant rate volatility, when they can spend a lot of time trying to determine if they are indeed getting a competitive rate," he adds. "Shippers that are paying market rates don't have to contemplate that question every time the rate changes."

"When those rates diverge greatly, shippers tend to break their contracts," he says. "But if capacity is tight, they may be unable to move their cargo. Carriers seek to force up the rates between those contracts, or favor cargo moving on spot rates. Enabling the contract rate to vary relative to an external index serves to reduce any possible divergence between contract and spot rates, therefore addressing the drivers of contract default."

Index-linked contracts work best over contract periods longer than one year, allowing both shippers and carriers to benefit, according to Index-Linked Container Contracts, a whitepaper produced by Drewry Shipping Consultants in June 2012.

"By enabling long-term contracts and decoupling price from negotiations (as this is determined by the index), shippers can reduce their procurement process costs, and carriers their cost of sale," the whitepaper explains. "It is important that the selected index follows the spot market (not contract rates or a combination of the two.) Otherwise, the index-linked contract will fail in its mission to reduce the differential between contract and spot market rates and the resultant risk of contract default."

"The pros and cons of index-linked contracts depend on the fundamentals of the agreement," adds Jakubauskas. "Those fundamentals include factors such as the shipper's volume consistency, and the rate adjustment scheme within the contracts. Shippers always run the risk of paying higher rates than their contemporaries, and vice versa."

For example, shippers that have negotiated an index-linked contract, and have upper and lower adjustment limits, may end up at the high end during their peak shipping season.

"The key is the duration," says Jakubauskas. "A long-term contract provides the full benefit due to volatility and fluctuating fuel prices."

Index-linked contracts don't suit all organizations. "Some big shippers feel annual fixed-rate contracts have served them well," Dixon says. "And some shippers that have taken advantage of spot markets sometimes end up paying the price later."

Dixon agrees, and says he is already seeing a strong uptick in index-based contracting. "Momentum is building, and we expect index-linked contracts to take off," he says. "A lack of understanding of the concept has been holding it back. Most shippers haven't grasped how index-linked contracts work, and are not sure how to confidently implement them.

Given the various options and caveats surrounding ocean freight contracts, shippers should consider the following elements before they sign on the dotted line.

It's not just price. When picking a carrier, shippers should also consider access to capacity, particularly in peak season when they may be moving more cargo than usual.

Start by devising a list of providers that suit your requirements, Dixon suggests. "Shippers should undertake a formal process by which they invite a large number of carriers and forwarders to provide quotes, then shortlist them," he says. "In addition to cost and capacity, provider reliability and product security are critical selection criteria."

Know what you need. Communicating requirements upfront is also critical. "Shippers should understand how their cargo fits into carrier service patterns," says Jakubauskas. "For example, one carrier may run from Hong Kong to Long Beach every week, and provide ample capacity. Another may offer lower rates, but provide less capacity and consistency. How do the carrier's offerings align with your requirements?"

Know your carriers. Shippers should also have full knowledge of their providers' profiles, and understand their strengths and weaknesses.

"How carriers allocate space, route cargo, and handle problem escalation and resolution are important factors," says Jakubauskas. "Also, shippers should know how providers will handle their business on both sides of the ocean under various potential scenarios. The more you know, the better prepared you are to narrow down carriers and start negotiation."

Be willing to compromise. Shippers should also know what service elements are most important, and where there is room for flexibility in the negotiations.

"Carriers are typically willing to give up things that don't add cost," says Jakubauskas. "Understand where you are willing to compromise, and where your carriers can give and take. Knowing that can help lead to a deal that is suitable for both sides. The key is to be able to deliver what you commit to, and expect the same in return."

Shippers should understand prevailing and forecasted market rates and charges—including the high end and low end—prior to negotiation. To reduce risk, shippers should split their volume by moving some cargo under an index-linked contract and some under a long-term contract.

Shippers aren't the only ones that stand to lose due to market volatility.

"Carriers expect to ride the markets up and down consistently, so they prefer stable rates with shippers over time," says Weber. "That lets them enjoy the same benefits as shippers.

"If our foresight doesn't hold true in terms of rates, we are on the losing side of the equation, and at that point we can't adjust contracts and agreements to align to market conditions," he adds. "Agreements must be written to allow both parties to come out winners."

Fuel surcharges. Most shippers manage at least some domestic distribution, so fuel surcharges have been a fact of life for them for several years. But fuel is a different animal when it comes to ocean shipping, and carriers have struggled to come up with a unified formula for applying surcharges.

"Fuel is a given; every business addresses fuel costs on some level," says Finkel. "But shippers should understand how carriers determine surcharges—what they use to measure the rate among different ports, and how fuel surcharges work."

While taking these elements into consideration can help shippers sign a deal they are satisfied with, carriers also must be content in order for an optimal business relationship to come to fruition.

"Shippers and carriers have to be able to negotiate in good faith, where both sides understand their responsibilities and the price is fair for everyone," says Finkel. "If rates are higher than the market, shippers are unhappy; if rates are lower, carriers are unhappy."

Shippers and carriers also need to be patient during the contract negotiation process. "Achieving a win-win contract is not a short-term goal," says Twachtmann. "Getting it right for both sides is achieved over the long term."