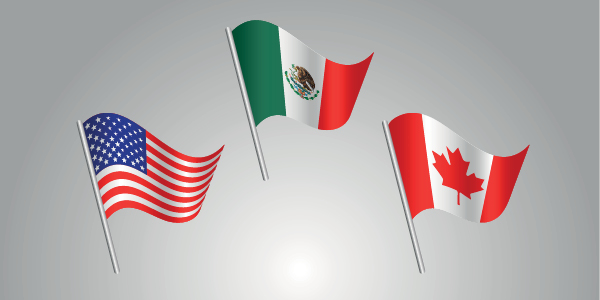 Although the recently announced trade deal between the United States, Mexico, and Canada is not likely to take effect until 2020, assuming each country grants final approval, many have been quick to seize upon the agreement in search of "winners and losers."

The new deal, known as the United States-Mexico-Canada Agreement (USMCA) is poised to replace the North American Free Trade Agreement (NAFTA), which has been in effect since 1994.

Possible winners seem to include U.S. online retailers that ship to Canada, along with their Canadian consumers and the express delivery companies that transport the goods. Here's a brief explanation:

Under the terms of the USMCA, Canada will raise its de minimis level from C$20 to C$40 for taxes, according to the Office of the U.S. Trade Representative. Canada will also set a de minimis threshold of C$150 for duty-free shipments.

Businesses shipping goods that fall below the de minimis threshold do not have to follow "formal entry" procedures. This means a faster and less onerous clearance process for businesses that tend to ship goods valued at less than C$150. A less burdensome customs process could also be a great incentive for those businesses to expand outreach—and sales—to Canadian consumers.

But, under the terms of the proposed agreement, only shipments arriving in Canada via express delivery carriers would be eligible to benefit from the duty and tax savings. This is a critical distinction, and means that shipments delivered to Canada through the postal system would be unaffected, and subject to the same C$20 threshold that is now in place. If the express carrier-specific language is ultimately adopted, Canadian consumers will have to consider the potential benefits of selecting an express delivery provider during the online checkout process.

Before a business makes any plans based on the new agreement, it's important to remember that the deal is still in draft form, and all three governments must approve it. The U.S. Congress is expected to begin deliberations in 2019, with a final outcome to be determined.

The USMCA updates key provisions of NAFTA in a way that would seem to encourage growth in U.S./Canada trade. Given the importance of that relationship to each country, the agreement appears to offer a solid path forward.