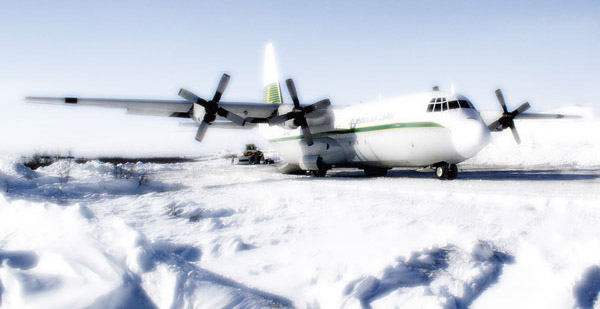 Famed naturalist John Muir first approached Alaska’s inside passage by steamship in 1879, weaving his way through the ribbons of water and land that bound the state’s southeast tail feather. In his memoirs, he vividly describes “zigzags of cascades,” “crowded spires of spruce and hemlock,” and the “silvery plashing of upspringing salmon.” Muir had a knack for detail.

Anyone who has had the opportunity to traverse the state’s barren interior and watery southeast labyrinths knows how consuming details can be. Alaska is one-fifth the size of the contiguous 48 states. Its scale is difficult to grasp.

Alaskan shippers face the challenge of transporting freight across an expansive and often remote supply chain. Mode neutrality is a given. Common household goods fly, barges ferry rail cars, and flatbed trucks transport cargo over gravel and ice passing for roads. It’s not uncommon for shipments to travel via all modes. With each additional touch, complexity grows.

Muir’s Alaska was purely aesthetic— and the state’s beauty remains. But today, to great lengths, Alaska is also a paradise for logisticians. It’s the home of intermodalism at its best.

Alaska has always been a transportation nexus, serving as a landbridge for human migration more than 10,000 years ago and today as an air bridge for global trade. Anchorage is an important intersection for the airfreight industry, a fueling and transshipment depot located nine hours on the fly to 95 percent of the world’s industrial population. Ted Stevens Anchorage International Airport historically ranks among the top cargo tonnage airports in the world. UPS, FedEx, and the U.S. military operate important bases in Anchorage.

While air connects Alaska to the world, intermodal stitches together 663,268 square miles of rugged terrain, linking urban to Inupiat, and coastal whitecaps to mountain snowcaps. Multimodal options afford shippers greater accessibility and reach, as well as opportunities to drive economy— a foremost challenge when transporting freight in, out, and through Alaska.

Compared to the contiguous United States— the Lower 48— Alaska’s intermodal model is inverted, explains Joe Samudovsky, Alaska Air Cargo’s director of cargo sales. “Generally in air intermodal transport, truck is the final leg,” he says. “But in Alaska, surface infrastructure isn’t very good, so barge to air and truck to air are required.” Often, air transport is the final mile.

To say Alaska’s overland capabilities are below average may be an overstatement. In many areas, infrastructure is non-existent. As a consequence, shippers and their transportation and logistics providers work together across modes to fill in gaps.

Challenges are many. Intermodal presents difficulties for shippers even in the best circumstances. Whenever there are transitions between modes, visibility throughout the entire supply chain is compromised. In Alaska, conditions are often extreme, costs are always high, and time is precious. Given the state’s geographic breadth, fickle weather, and the cost of transporting freight across great distances, ensuring seamless transportation handoffs is a necessity.

Complying with regulatory mandates is challenging enough for U.S. shippers tackling interstate truckload moves. In Alaska, the rules are amplified.

“If you’re shipping pharmaceuticals from California to Nome, each connection presents challenges,” says McKallor. “Our job is to simplify them.”

A great deal of time and expense is lost transshipping freight between modes. Apart from regulatory considerations, even common consumer goods shipped in traditional containers create problems for companies.

“One of our retail customers was operating a crossdock facility with an ‘Alaska staging area.’ They were breaking down pallets in order to position freight into containers, and expending a great deal of labor,” says McKallor. “To facilitate loading, we designed containers that are bigger and taller than a regular box— making containers more like trailers.”

Best of Both Worlds

Lynden works with shippers to maximize payloads and efficiencies. Multimodal allows it to use trucking and marine expertise to get the best of both worlds. Southeast Alaska’s supply chain, for example, is far different from the mainland’s. The marine highway replaces overland transport as the main transportation artery.

Lynden’s Alaska Marine Lines has developed tactics to optimize cube and weight capacity on weekly strings between Whittier and Seattle. Its barges are set up to accommodate eight tracks of rail cars. The company has developed a racking system that allows it to position containers on top of rail cars to increase stowage.

On the air side of intermodal, the stakes are even higher. During times of the year when ice freezes over, air freight is the only option for shipping to the Arctic or Southwest Alaska. The bush supply chain is equally different.

“We take for granted how lumber, cement, sheet rock, and lettuce can move,” says Samudovsky. “What may fit nicely on a barge or in a freight container may not fit as well in an aircraft.”

TSA requirements restrict certain cargo types. Some can’t fly as freight on passenger aircraft; others have to move via freighter. There are regulatory reasons, but in Alaska, freight sometimes dictates, too.

For example, shippers moving heavy machinery bound for the North Slope must ensure sharp protruding pieces of metal are properly padded to prevent damage to an aircraft’s skin. Alaska Air Cargo and the TSA impose stringent requirements on cargo, and the airline works with shippers to educate them on what is permissible and how shipments need to be packaged.

Although intermodal logistics offers advantages that provide greater accessibility and help shippers manage overall cost efficiency, users should conduct a total-cost analysis when managing their supply chains, explains Samudovsky. “Air freight’s speed and dependability can help mitigate other costs, such as warehousing and inventory,” he says.

Shippers look to transportation providers such as Lynden, Alaska Air Cargo, and Carlile to make Alaska as much like the Lower 48 as possible. It’s no small task. But what makes logistics extreme and challenging also creates opportunity. Mode access and neutrality, and the great distances freight moves in, out, or within Alaska, allow shippers and carriers greater flexibility in responding to demand.

For example, Lynden’s dynamic routing solution utilizes trucks, ships, barge, ferry, and aircraft in any combination to offer shippers door-to-door speed, dependability, and economy to any point in Alaska— regardless of shipment type or size. It allows shippers to slow down shipments if they are moving too fast or expedite if they are running late.

“It gives us the flexibility to manage the supply chain flow and helps shippers save money over the entire move,” says McKallor. As a complement, Lynden has opened an Anchorage warehouse facility to position forward inventory; pick, pack, and pull goods from the DC; and enable customers to meet rapid-delivery needs.

Normal container shipments are one thing. Complexity builds when shippers tackle project cargo logistics, which is common in Alaska’s mining, construction, and oil refining industries. When multiple vendors are involved, and consignees require just-in-time shipments so that on-site operations and labor remain active, managing mode and demand responsiveness is key.

Carlile, which handles a high volume of bulk freight truck shipments bound for the North Slope, uses intermodal in four ways: rail cars that roll on and off barges, common for drilling equipment that moves through Whittier; direct to barge through Anchorage, Seward, and Valdez; container ships such as Horizon Lines in Anchorage; and roll on/roll off (RoRo) service with Totem Ocean Trailer Express (TOTE), also in Anchorage.

TOTE operates two cargo ships between Tacoma and Anchorage, and provides overland highway and intermodal connections throughout greater Alaska, the Lower 48 states, and Canada. Its ships can handle 550 forty-foot equivalents (FEUs) and 250 vehicles, depending on cargo mix. Transit time between Anchorage and Tacoma is about three days.

TOTE vessels carry an assortment of product ranging from consumables in containers to automobiles and heavy equipment. About 95 percent of freight moving via water into the Alaskan interior moves with either TOTE or Horizon Lines.

Using TOTE’s RoRo fleet allows shippers and other transportation service providers to drive just about any type of freight— whether it’s a bulldozer or a trailerload of household goods— onto a ship.

from rail to ship to road

For companies such as Carlile, and their customers, this type of modal altruism is business as usual in the Alaskan trade. And it helps all parties involved manage supply chain flows and demand responsiveness.

“The drill pipe industry moves a lot of heavy bulk by rail— from Houston to Seattle, for example— then rail on barge to Whittier, rail north to Fairbanks, then by truck to Prudhoe Bay,” says Hendrix. “Railcars can carry 200,000-pound loads.”

For Carlile, bulk product shipments moving in and out of Alaska by rail are transferred via the Alaska Railroad system. Rail barge service in Whittier marks the entry or departure point, and shipments are then transferred to highway at Carlile’s transfer facility in Fairbanks.

Because distances are so vast, shippers moving product into and within Alaska can make business and cost decisions by mode on the fly.

“If an oil field module is bound for the North Slope and the schedule improves, Carlile can put it on a truck and get it to Fairbanks in 56 hours using a sleeper team,” Hendrix says. “Alternatively, it can steam from Seattle to Anchorage, which can take anywhere from five to seven days.”

Between Houston and Prudhoe Bay, Seattle becomes a supply chain pivot; modes and routings can be tweaked accordingly, depending on time and cost requirements.

“If an oil company changes the design of a well and needs components right away, Carlile can truck it 4,600 miles from Houston to Prudhoe Bay,” Hendrix explains. “By comparison, a steamship line would take 45 days, with rail and truck connections in Whittier and Fairbanks, respectively.”

But if a pipeline shuts down and it’s gushing money, surface transport doesn’t cut it, explains Samudovsky. “That’s why Carlile is our customer.”

The visage that awed John Muir more than one century ago hasn’t changed much— apart from the strings of passing Alaska Marine Line barges laden with assorted railroad cars, automobiles, camper vans, containers, and out-of-the-box project cargo. Or the sound of bush planes buzzing above.

For a state as vast and remote as Alaska, where even the capital is only accessible by air and water, community is the common denominator that links places such as Petersburg, Skagway, Seward, Homer, and Prudhoe Bay to Anchorage and Fairbanks, Seattle, and the rest of the world.

Because of the rich connectivity between modes, Alaska’s transportation and logistics sector is an exclusive fraternity with a unified goal.

“Customers and residents rely on an efficient means of transportation to move goods,” says Samudovsky. “We recognize our unique place in the Alaska community and the role and services we provide.”