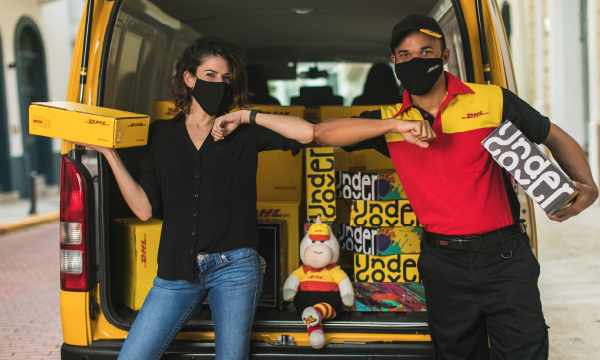 When Undercover Boots first began working with DHL Express, it shipped its rain boots to just 12 countries. Today, it ships to 72 countries worldwide and the proportion of e-commerce sales has increased from 30% to about 90%.

Undercover Boots, based in Panama, has been designing and selling its colorful rain boots and shoes since its founding in 2014. Over the past seven years, it has expanded sales to 72 countries, even though only eight individuals are listed on its employee roster.

THE CUSTOMER
Founded in 2014, Undercover Boots creates original and comfortable rain boots that embed art and culture. With each pair of Undercover rain boots purchased, the company donates to organizations focused on supporting children in need, animal protection, and environmental conservation.

Undercover Boots' partnership with DHL Express has been key to its growth and success, says Mary Quintero, Undercover Boots' founder and chief executive officer. While the partnership initially focused on shipping, Quintero then participated in DHL's Pymexporta program, where she gained critical insight into customs, finance, and other export functions.

Given that Panama lies slightly north of the equator, it's not surprising the rainy season extends for seven to eight months each year. What was surprising was how difficult it was to find "really cool rain boots," Quintero says.

After a decade working in hotel management in Switzerland, when Quintero combined her passion for travel and languages, she returned to Panama to figure out her next steps. When she left Europe, Quintero brought with her several brands of rain boots that weren't available in Panama. When she was out and about, people would ask her where she bought her boots.

Quintero had found her calling. As she considered how to turn it into a business, her dad told her, "There are 10,000 companies making rain boots. You really need to make a difference to be competitive."

Taking his advice to heart, Quintero started with a small collection of boots that infused art and culture. One current style features a colorful cityscape, and another shows a vibrant desert scene.

As eye-catching as the boots are, when it took nine days for a customer to receive an order, Quintero knew she needed to change her shipping methods. Instead of using the Panamanian national mail service as she had been doing, Undercover Boots made DHL Express its exclusive shipping partner.

Because Panama currently lacks a strong manufacturing infrastructure, the company produces its boots in China. For most sales, Undercover Boots works with DHL to fulfill orders from warehouses in Panama and the United States.

DHL Express, an international express service provider, operates in about 220 countries and territories, says Mike Parra, chief executive officer of DHL Express Americas. Outside of the United States and Canada, it's number one in its respective markets, he adds. About 80% of the company's active customer base consists of micro, small, and mid-sized enterprises.

By participating in DHL's Pymexporta workshops, which are offered throughout Central and South America, Quintero learned about a range of topics critical to building a growing, international brand.

In these workshops, DHL experts, working with government agencies and other businesses and organizations, share their insight on subjects such as customs, exporting, banking, packaging, and market differences. This helps businesses like Undercover Boots more efficiently and effectively reach global markets.

The goal is to help small businesses "be successful and be able to take their businesses global," Parra says.

The structure of the Pymexporta programs can vary, as local managers and their teams decide on the seminars, webinars, classes, and other media that make sense for their area. Classes typically meet monthly or quarterly. During the pandemic, they shifted to a virtual format. Becoming a DHL customer is not a requirement and the program is open to non-customers.

Through her work with DHL, Quintero decided to implement the Delivered Duty Paid program, which calculates customs charges at shipment, rather than waiting to collect it from customers at delivery. This makes shipping "easier and seamless," Quintero says, as customers don't need to worry about additional import paperwork and payments. Another DHL program, the On Demand Delivery Service, allows customers to specify where and when their packages are delivered.

In 2018, Undercover Boots won DHL's Pymexporta award for growing its export operations, and for bringing Panamanian art and culture to consumers across the globe. "Every year we award a local company in the country that embodies values similar to DHL," Parra says.

"Undercover Boots is very purpose driven," he says. "Besides wanting to grow a business, Mary Quintero wants to give back to the world."

With a goal of leaving "positive footprints," Undercover Boots has supported Pro Niños del Darien, which provides food, clothes, and other items to children in need, as well as the National Association for the Conservation of the Environment of Panama.

The growth Undercover Boots has seen since partnering with DHL shows how a small business can grow in a short time by leveraging e-commerce and the resources of DHL. The program gave Quintero "the momentum and the confidence to decide to take her business global," Parra says.

Quintero agrees, noting that the information and partnership helped change her mindset, and she began to think of herself as a chief executive officer and leader of a business. "The tools DHL provides transform you," she says. "You will change as a human being and your vision will change. To me, that has no price."

Preparing for the Next Step

When she had still been working as an employee, one of Quintero's bosses told her that nobody is ever truly ready for their direct next position. If they were, they'd simply skip it and go to the position after that.

When Undercover partnered with DHL to go global, "maybe we weren't 100% ready," Quintero says. Yet while Undercover's growth has been swift, "the program guides you in every level," she says, with the array of information it offers.

DHL also can introduce growing businesses to banks and government economic development agencies. The knowledge and connections can help companies move their businesses to the next level. "If you are a brand that has a good product, and you want to export and tell the world who you are, DHL shows you how and guides you," Quintero says.

Undercover Boots keeps a map of the world on a wall. Each time an order comes in from a new country, Quintero and her colleagues mark it off.

The pandemic hit Undercover Boots just as it did most businesses. "The first month was bad," Quintero says, noting that Panama's lockdown lasted about seven months, during which Undercover Boots' brick-and-mortar store remained closed.

"It would have been easy for us to sit down and just wait," Quintero says. But she chose to figure out how she'd navigate the pandemic and lockdowns, and then act.

Fortunately, Quintero already had an online business. While e-commerce has been popular in many areas of the world for years, it wasn't as popular in Panama. "We had to really push it," Quintero says.

Quintero and her team changed the website so it can accept international payments. It also now shows prices in multiple currencies, while shoe sizes are shown in both inches and centimeters. In roughly seven months, the percentage of e-commerce orders jumped from about 30% to about 90%.

With Undercover Boots' brick-and- mortar store closed, Quintero's home became an e-commerce fulfillment warehouse. She filled the orders, labeled the boxes, and then ran them down the stairs to a truck or motorcycle, which took them to DHL; designated an essential business, DHL facilities remained open. "The concierge of my apartment building kept laughing and asking, 'What are you doing?'" she says.

There were more questions when Quintero signed a contract in May 2020—just several months into the pandemic—to produce the DHLUndercover collection. The limited-edition boots, raincoats, and plush toys feature DHL's red and yellow brand colors.

"People said, 'You must have lost your mind. You don't know what's going to happen,'" she says, adding "we had so much faith in the project." Within about seven months, the collection nearly sold out.

DHL has partnered with other companies including Casetify, a producer of phone cases and other tech accessories based in Hong Kong and Los Angeles; and Switzerland-based fashion brand Vetements.

As the worst of the pandemic eases in many parts of the world, Quintero is still going strong. Among other steps, she is raising capital to fund the company's growth. She's also launching a three-year plan to more fully penetrate the U.S. market.

Quintero's advice to other business owners and entrepreneurs? "Don't be the first one to put limits on your dreams. Just live them with true passion."

Casebook Study: Getting the Boot

The company partnered with DHL Express and participated in its Pymexporta program, which offers information critical to exporting, such as customs, banking, packaging, and the differences between various markets.

Over the past several years, Undercover Boots expanded the number of countries it exports to from 12 to about 72, while increasing the proportion of e-commerce sales from 30% to about 90%. The company also partnered with DHL Express to create a limited-edition collection of boots and shoes.

Related Articles
Reader Profile | Jeff Larson: A Gem of a JobEnabling a Faster-to-Market SolutionWalmart’s ShippingPass Has Ended. What Retailers Should Do Next.Tackling Retail Logistics: Build Your Team First3PLs & Carriers: At Your ServiceHow to Beat Amazon at the Retail and Supply Chain Game in 2017Getting the Goods on Logistics this Holiday SeasonWhat’s Driving the Air Freight Industry Today?Why Retailers Need the TPPAccurate Product Data Drives Supply Chain Systems More related articles...