Supply Chains that Rock Around the Clock: Everybody's Doing the Locomotion 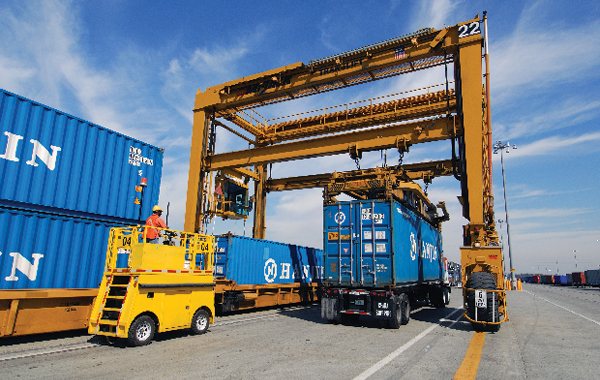 A typical intermodal shipment on a Class I railroad such as Union Pacific takes three days; moving the container on and off port adds extra time.

An intermodal container takes The Midnight Train to Georgia...or to any state that needs a shipment delivered.

Just as Rome wasn't built in a day, not every logistics operation runs from start to finish in just 24 hours. Freight railroads work around the clock, but in the course of a linehaul journey on a Class I railroad, usually the earth rotates on its axis several times.

An intermodal container carried by Union Pacific (UP) from the Port of Los Angeles and Long Beach to Dallas typically takes about 77 hours—roughly three days. The work of getting the container off the port and onto a train adds extra time.

A 40-foot container loaded with housewares has been crossing the Pacific on a containership for the past two weeks. The owner of the product, a retail corporation, contracted with the ocean carrier to move the load from origin to a distribution center (DC) in Dallas. In the language of international trade, this retailer is known as the Beneficial Cargo Owner (BCO).

The ocean carrier, in turn, has contracted with Union Pacific to move the container from the Port of Los Angeles and Long Beach to the railroad's Dallas Intermodal Terminal.

It takes about three days for workers to unload the containership at the on-dock terminal. UP contracts with a vendor to transfer containers on a train operated by Pacific Harbor Line (PHL), the port's shortline railroad. PHL, in turn, interchanges the containers to UP.

Workers may use various kinds of equipment in these transfers. One example is a rubber tired gantry crane, which lifts, moves, and stacks containers. Another device, called a packer, resembles a giant forklift.

Life in the Fast Lane

Use of an on-dock terminal allows our container to start its journey quickly, since there's no need to truck it through surface traffic in and around the port complex. But some containers that land in Los Angeles/Long Beach get into the UP system by a different route. The ocean carrier or the BCO hires a drayage truck to haul the container to UP's Intermodal Container Transfer Facility (ICTF) in Long Beach, about five miles from the port.

The ICTF has five published cutoff times for receiving Dallas-bound freight in Los Angeles. If the container enters the gate before the cutoff, UP does its best to load it on the next scheduled train.

Along with the container, UP receives an electronic data interchange (EDI) message from the ocean carrier, containing a waybill. This document includes the container's origin, destination, and weight, plus a document billing reference number. UP will retain this information for 15 days—until well after the delivery is complete—and then purge it.

The container reaches the terminal at 2 p.m. on Monday, well before the 4 p.m. cutoff time. That allows UP to load the container onto the first train scheduled to leave after 4 p.m. UP's goal is to get this train to Dallas within 77 hours of that 4 p.m. cutoff, which makes the expected arrival time 9 p.m. on Thursday. For the majority of containers originating from the on-dock terminal, UP provides services for daily departure.

As the container makes this trip, UP will send the ocean carrier continual updates on its progress via EDI. Customers who don't use EDI have multiple options to track and trace their shipments via mobile applications, UP's website, or by calling the company's National Customer Service Center (NCSC). The ocean carrier, in turn, relays status information to its own customer, the retail company that owns the cargo.

Although this container leaves Los Angeles on time, situations occasionally arise that can cause delays at the terminal. Sometimes there are so many outgoing containers in the yard that the next scheduled train reaches its maximum allowable length, forcing the railroad to leave some containers behind. UP will load those containers, called miss outs, on the next train.

In other cases, there isn't enough cargo to build a train that meets minimum length requirements, so the train doesn't leave. Shortages of locomotives, crew, or rail cars also can keep trains from leaving on schedule. Other situations can contribute to a delay; however, those are situational and occur infrequently.

If any such delay occurs, customers learn about it and get updates on the status of their loads via EDI, the UP website, or the NCSC.

UP uses a two-person crew to operate each of its trains. The conductor and engineer who take the train out of Los Angeles both live nearby and are assigned to a specific geographic area, with the port as the hub of their territory. Crew members often begin their careers at UP as switchmen, working in the freight yard to switch trains from one track to another.

Now, as train crew, they're part of a chain of people who are responsible for getting the train safely from origin to destination. Although their territory is fixed, their hours are not. They work variable schedules: Some days a shift might last eight hours, and some days it might last as many as 12. Also, train crew are on call 24 hours a day, 365 days a year. When the call comes, a crew member often has just 90 minutes to report to work.

The conductor is responsible for the entire train, freight, and crew. The engineer's job is to operate the locomotive. Both stay in continual radio communication with dispatchers at UP's Harriman Dispatching Center, a massive complex of people and technology located near UP's headquarters in Omaha. Together with colleagues in six satellite facilities, dispatchers at the Harriman Center coordinate the safe movement of trains throughout UP's network, which spans 23 states.

The route our container follows from Los Angeles to Dallas takes the train on a southeasterly course through Tucson, Ariz., and El Paso, Texas, before angling northeast toward Dallas.

Along the way, trackside scanners collect data from automatic equipment identification tags installed on the sides of freight cars and locomotives. These radio frequency identification tags are similar in technology and function to the tags used in some warehouses and retail stores to track inventory. They are one source of data that UP uses to keep customers informed, via EDI, about the status of their freight.

Federal regulations allow train crew members to work for up to 12 hours. After that, they must get at least 10 hours of rest. As the train moves along its route, it stops periodically at a freight yard or crew change point to release the conductor and engineer and take on the next crew. A crew van delivers the fresh crew to the change point and picks up the two who are ending their shifts. Depending on the location and time, the van might take those crew members home, or it might deliver them to a hotel to rest up before starting a new assignment.

Some trains on the route from Los Angeles to Dallas stop along the way to pick up or drop off containers, but this one doesn't. Other, unexpected, situations might force a train to stop, sometimes for hours. For example, a storm might blow through, making safe operation impossible for a time. Or—just as an over-the-road truck might encounter construction that forces traffic to a standstill—the train might come upon a crew performing Maintenance of Way work on a section of track.

Mechanical issues might also arise, and that's what happens on this run. A wheel bearing overheats, which could cause an accident if not detected and addressed. To avert such problems, UP installed a series of infrared hotbox detectors along the rail bed. When the overheated axle passes this detector, the device notes the problem and broadcasts an audible announcement, alerting the train crew and the Harriman Dispatching Center about the situation.

A dispatcher determines where the train can pull into a siding, or a section of track off the mainline, to be inspected. She tells the crew to stop at that location. At the same time, the dispatcher sends staff from the mechanical department to inspect the bearing.

Depending on how severe the problem is, they might be able to fix the bearing on site, or they might need to transfer the affected car to a repair shop. In this instance, the repair crew performs an on-site repair. Once they complete that work, the dispatcher tells the train crew to get the train back on its way. Our container is now a few hours behind schedule, but it is moving toward Dallas once again.

At 11:30 p.m. Thursday, the train arrives at UP's Dallas Intermodal Terminal, where it is positioned for unloading. Workers at the terminal (also known as a ramp) unload our container from the train and place it onto a chassis. At this point, the customer—the ocean carrier responsible for the door-to-door move—receives an EDI message stating that the container has arrived and is ready for pickup.

This journey is based mainly on information provided by Mark Simon, assistant vice president-international intermodal, marketing, and sales at UP, headquartered in Omaha, Neb.