Supply Chains that Rock Around the Clock: Gimme Shelter 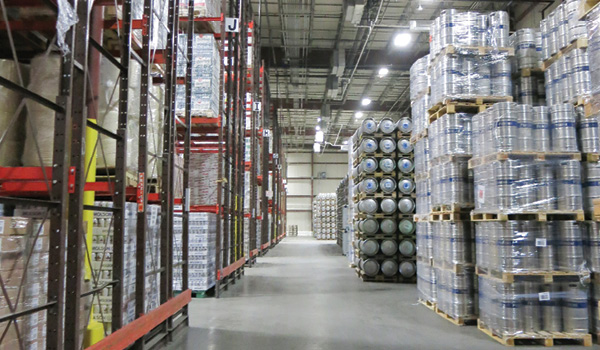 Port facility East Coast Warehouse is a Day Tripper, and doesn't take the easy way out, storing and distributing products even through terminal delays and Superstorm Sandy.

As a port-centric facility, operations at East Coast Warehouse & Distribution hinge on the terminals at the Port of New York/New Jersey. When things are running smoothly at the rail and marine terminals, the advantages of its location on the port come to the fore.

"Being on the port, we're able to pick up shippers' containers once they're available from the ship within 48 hours," says James Overley, CEO, East Coast Warehouse & Distribution. The company pulls approximately 40,000 containers from the Port of New York/New Jersey each year, according to its estimates.

Its massive facility—with more than one million square feet of space—houses finished goods, serving three vertical markets: beverage (including beer, wine, and water), food products (such as cheese, olives, and popcorn), and confectionery (from chocolates to hard candy). The company estimates that it ships 11 million cases of beer and 13 million cases of candy annually.

East Coast Warehouse's temperature-controlled facility functions as a crucial first step in importers' U.S. distribution systems. "About 90 percent of the product that's in our warehouse comes from another country," notes Overley. "When products arrive in a container on a ship, we dispatch a truck to pick it up, and bring it here, store it, distribute it, and move it to its final destination."

Products in the warehouse come primarily from Europe, with a small percentage originating from South America.

The 21/5 operation starts at 8 a.m. and runs five days a week. Most container loading and unloading at the facility happens during the day shift (8 a.m. to 5 p.m.). To improve processing times for its supply chain partners, the facility employs an appointment-based pickup model, letting shippers plan down to the minute when products are ready to exit the warehouse. Truckers have appointments to come in and load containers throughout the day.

Let's say an East Coast Warehouse customer—a candy importer—has a trucker coming in to pick up a 52-foot drive-in trailer of gummy bears at a particular time during the day shift. East Coast Warehouse workers pick the order the night before and stage it by a door, so it's ready for the appointment the next morning.

"We assign the truck driver to that particular door. The product's already there," says Overley. "The driver backs in, we load up the truck, and away it goes."

East Coast Warehouse deploys its own fleet to pick up containers from Monday to Friday from nearby marine and rail terminals.

The facility's location in a heavyweight zone is a huge advantage for importers of heavy, dense product. The legal weight for a container to go out on the New Jersey Turnpike cannot exceed 42,500 pounds, notes Richard Coppola, vice president of sales. If it does, importers are required to secure costly special overweight/heavyweight permits.

"Because we're on port property, our customers can max out as much weight in the containers as they want with no penalties and no added cost," notes Coppola.

Another advantage of its proximity to the New York/New Jersey port container terminals is the ability to redirect trucks when ports are congested. "If one terminal is backed up, we shift some of that capacity to another terminal that's not as congested," says Coppola. "We come back later in the day to the congested terminal."

Once truckers bring containers into its yard, the company's nine switchers take over. They are responsible for moving containers in the yard, and bringing them to the door to unload contents. A magnetic radio frequency identification (RFID) tag is affixed to each container to track its location utilizing RFID readers and GPS sensors mounted on spotter trucks.

The company recently launched the cloud-based yard management system from PINC Solutions. Through this technology, both employees and shippers have visibility into the status of containers—whether they are in transit, arrived at the facility, in the process of being unloaded, already unloaded, or have been emptied and checked out.

"We can pull this information up on an app, and see every container," says Overley. "We have visibility into every shipment in the yard. We have the yard mapped out into key locations from a GPS standpoint."

During the unloading process, warehouse workers pull pallets out with forklift trucks, and set them down at their location in the warehouse. Containers that are not palletized require unloaders. These workers take out the separate, stacked boxes, build a pallet up, and shrink wrap it before it is officially stored in the warehouse.

Workers electronically scan all SKUs arriving in the warehouse using RFID technology, which gives them visibility into pallet locations. This data automatically feeds into its inventory management system (SNAP), which customers can access through a web portal. The portal—part of East Coast Warehouse's comprehensive WMS—allows importers to view all stages of container, inventory, and order status availability around the clock.

Products turn faster in high-demand seasons, such as summer for beer, and Easter, Halloween, and Christmas for candy. With shippers' just-in-time inventories hanging in the balance, East Coast Warehouse makes sure port terminal delays and other inclement conditions don't disrupt supply chains.

"We're the sole distributor for many Fortune 500 companies in either the Northeast or one of a few different distribution points throughout the United States," notes Overley.

Take one popular beer company, for example. Leading up to St. Patrick's Day 2015, port delays made the possibility of a stock-out imminent for the brewer during this crucial holiday. "The ports were totally upside down; there was complete gridlock," recalls Coppola. "It took drivers eight hours to recover a single box."

When it proved impossible to retrieve the customer's containers during the port terminals' Monday-to-Friday hours, East Coast Warehouse paid some of the terminals out of its own pocket to open on Saturday. It was able to pick up the containers in time to prevent the customer's supply from running dry.

Aside from warehousing and transportation, East Coast Warehouse counts customs clearance as another segment of its business. Its above-sea-level 14.5-acre exam and post-exam container service yard proved to be key during Superstorm Sandy in October 2012.

While nearby facilities sustained significant damage, its warehouses and yard stayed dry and had power even in the storm's aftermath. The company allowed both the Federal Emergency Management Agency and U.S. Customs & Border Protection to use its facility as an emergency command center.

In addition, nearby warehouses that were forced to shut down operations after the storm turned to East Coast Warehouse for help. The facility served as a surrogate site until the damaged warehouses were able to get back up and running, helping its competitors' customers keep supply chains in motion.

"All CFOs want to reduce inventories, match customer demand and production, and keep those in balance to reduce working capital levels," says Overley. The East Coast Warehouse facility helps them do just that, keeping supply chains running in a fast-paced JIT global market.

"It's amazing that a package of gummy worms made overseas can be here in three weeks by ship," says Overley. "Within five days after it's offloaded, it can be on a retailer's shelf."

Related Articles
The Dairy Supply Chain: From Farm to FridgeFast But Steady Wins The Expedited RaceGet The Scoop: The Ice Cream Supply ChainG75: Inbound Logistics' 75 Green Supply Chain PartnersTrends—April 2016A New Rx for Pharma Cold ChainsComing in Out of the ColdTrends—December 2015Regulatory Update: Playing by the RulesAdding Value to Your Supply Chain More related articles...