The Tricks Of Trade 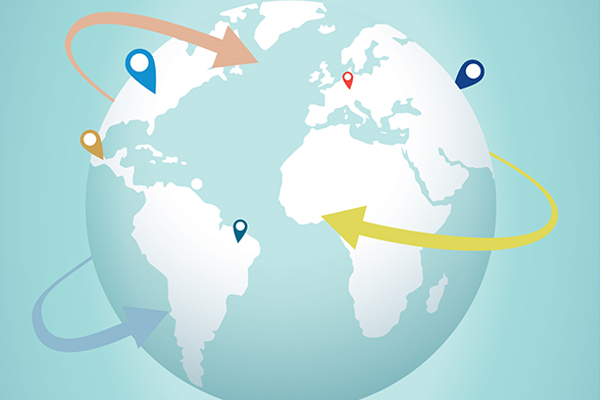 5 regions and countries that merit serious thought by any company doing business globally.

Never has trade held such a prominent place in the minds of corporate leaders. The economic and supply impacts of tariff and non-tariff barriers pose a credible threat to corporate success; they also might push some small to mid-sized enterprises to the brink of failure. The trade wars and other protectionist actions led by the United States and followed by many other countries are not going away soon.

President Trump has implemented some protectionist policies that may backfire against some U.S. companies. For example, Section 201 tariffs on washers and solar panels; Section 232 tariffs on steel, aluminum, and uranium; and Section 301 tariffs on Chinese Intellectual Property represent $32 billion worth of new taxes on American business.

If the increases originally scheduled for March 2, 2019, are eventually implemented, the total impact rises to $129 billion. If the administration moves ahead with imposing additional tariffs, long-run Gross Domestic Product (GDP) would fall by 0.38 percent ($94.4 billion) and wages by 0.24 percent.

Additionally, 292,600 full-time equivalent jobs would be eliminated, according to the Tax Foundation Taxes and Growth Model, April 2018.

Global trade has gotten even more complicated now that countries including China, the European Union, India, Turkey, Russia, Canada, and Mexico are imposing $29.1 billion in retaliatory tariffs on many goods that are essential to the U.S. economy. American farmers shut out of foreign markets due to the retaliatory tariffs have been promised a $12-billion bailout program but had received only $838 million as of November 2018.

And while the "truce" between China and the United States allowed China to buy U.S. soybeans for the first time since July 2018, it's still a fraction of what's imported during a typical year.

As a result, many companies are reviewing their supply chains and looking to move manufacturing operations from China to countries not subject to these tariffs. Companies that cannot quickly or cost-effectively move their manufacturing are looking at engineering design changes to avoid the tariffs. Some companies are scrambling to request exclusions from these tariffs, however less than 25 percent of such requests have been approved.

The bill that averted the government shutdown in February 2019 included $4.5 million for "contractor support to implement the product exclusion process for articles covered by actions taken under Section 232," according to bill text posted by the House Appropriations Committee.

On December 1, 2018, U.S., Mexican, and Canadian leaders signed the United States-Mexico-Canada Agreement (USMCA) at this year's G-20 meeting after NAFTA had been renegotiated. It still needs to be ratified by each country's legislature, which will be a lengthy process. Estimates are that the agreement won't go into effect before 2020.

The bitter reality is that any progress on Canada or Mexico ratifying USMCA will be stalled until the United States removes the tariffs on aluminum and steel. Equally troubling is the likelihood that the U.S. House of Representatives will be reluctant to hand President Trump any type of political victory. Unfortunately, a USMCA implementation bill has yet to be introduced to Congress.

There is fear that Congress' failure to ratify USMCA would result in President Trump withdrawing from NAFTA, forcing some companies to pay duties and taxes on items that have been free for the past 25 years. Increasing the cost of goods traded between the North America countries could cripple all three economies.

United Kingdom: Deal or No Deal?

The United Kingdom is due to leave the European Union (EU) on March 29, 2019, unless the UK somehow changes its own laws. As of this publication date, it is looking less likely that any trade deal will be settled between the EU and the UK and there will be no deal on March 29th.

As we wait for news of deal or no deal, companies should be preparing for all eventualities of Brexit, whether deal, no deal, or the least-likely no Brexit. What should companies be considering? We recommend analyzing it from an organizational perspective.

The trade compliance department should consider how each scenario impacts the export license requirements for dual-use items from the UK to the EU, and vice versa. Companies should have inventories of all existing export licenses issued in the UK. They should classify and value goods correctly for import, export, and customs documentation for the UK supply chain when Brexit happens.

Tax and finance departments should consider the value-added tax (VAT) impact of the various scenarios and identify deferment options and budget for customs duty expenses on imports in and out of the UK.

Deal Brexit may result in new preferential trade agreements and No Deal Brexit will apply the World Trade Organization's most-favored-nation duty rate, which will have significant fiscal impact. Companies should register for an Economic Operator Registration and Identification (EORI) number for shipments in/out of the UK to the EU, a requirement for any party intending to import to, or export from, the EU.

The movement of goods between countries within the EU is described as "arrivals and dispatches" while goods moving across EU borders are "imports and exports." If the UK separates from the EU, movement of goods in and out of the UK will require an EORI for shipments to the EU.

The IT department must consider GDPR compliance and the reality that they cannot store customer data in the UK. They will need to move UK servers to a server in an EU country.

If all new tariffs currently under consideration were to be implemented, more than 5 percent of global goods trade would be affected, and average U.S. tariff rates would increase to levels not seen since the late 1960s. The dampening impact of trade tensions involving major economies could be amplified by adverse confidence effects. The cost of protectionism can be multiplied through global value linkages, particularly in emerging markets.

In recent years, the United States has implemented economic sanctions on Russian people or entities, including banks, oligarchs, cyber contractors, business tycoons, and a shipping agent. Treasury Department Office of Foreign Assets Control sanctions were put in place following Russia's military intervention in the Ukraine and annexation of Crimea.

The sanctions added a significant administrative burden to U.S. companies doing business with Russia, requiring them to determine if one or more blocked person owns 50 percent or more in the aggregate of an entity. Companies have to secure ownership details that may not be publicly available or may be difficult to obtain and validate.

For many years Russia has enacted tariff and non-tariff barriers on U.S. companies, including technical regulations and product testing and certification requirements that pose significant barriers because only entities registered and residing in Russia can apply for these product certifications. Importing alcohol products requires all customs duties, excise taxes, and VAT be paid in advance using a bank guarantee and deposit.

A myriad of Russian government agencies administer licenses that add complexity that companies do not face in other countries. Almost all U.S. food and agricultural exports have been banned since 2014, when the United States imposed sanctions on Russia.

Russia has specifically enacted laws that give priority to Russian software. Russian government agencies can buy foreign software only when similar software is not available on the Russian Communications Ministry software registry. The Russian Federal Service for Supervision of the Sphere of Telecom Information Technologies and Mass Communications can fine Russian citizens who store personal data on servers physically located outside of Russia.

And Russia, like many countries, has imposed retaliatory tariffs of 25 to 40 percent on U.S.-origin products in response to U.S. Section 232 tariffs on steel and aluminum. There are Russian-made substitutes for all these products, such as road construction equipment, oil and gas equipment, tools for metal processing and rock drilling, and fiber optics.

In December 2018, the World Trade Organization Dispute Settlement Body approved the United States' second request for formation of a dispute panel to review the legality of Russia's tariffs in response to U.S. Section 232 tariffs on steel and aluminum.

CPTPP Countries: Something To Hope For

These 11 countries, a majority of which have centers of manufacturing excellence, are worth watching in the coming years. They didn't slow down when the United States withdrew from the TPP; instead they recrafted a deal that will lower tariffs among their countries

Companies will benefit by doing business in these countries now that the CPTPP entered into force on December 30, 2018. The agreement will generate significant economic benefits for Canada by providing access to Japan and other fast-growing markets, including Malaysia and Vietnam.

The expectation is that these benefits will also extend to new members. CPTPP members will gain a predictable trading environment that will give manufacturers and exporters an advantage in new markets.

The CPTPP also includes annexes that address specific challenges faced by exporters of pharmaceuticals, medical devices, information and communications technology, and cosmetics. And there will be a phased tariff elimination for vehicles and automotive parts.

There are several potential members to this new agreement: South Korea, Taiwan, the Philippines, Colombia, Thailand, Laos, Indonesia, Cambodia, Bangladesh, and India. One striking reality of the CPTPP is that prospective members would have to strike existing protectionist trade policies in order to join the agreement, benefiting all.

To date, the U.S. economy is experiencing robust growth, with strength in domestic demand. There are signs that productivity and labor participation are increasing. Nominal wages have been outpacing inflation, resulting in modest real wage gains. Fiscal and monetary policies will stimulate activity in the near term but are likely to become a drag by 2020.

Because companies can't avoid the trading realities that these regions/countries pose, they must plan strategically to react swiftly to the challenges 2019 will certainly bring.

The common thread when planning for 2019 and onward is for companies to leverage their existing data when building an effective strategy. Companies should look inward to assess how they operate and how current trade issues impact their operations.

Whether it's China, the CPTPP countries, Russia, North America, or the UK, companies should map out all potential scenarios and develop contingency plans.