Thanks to demographic shifts and manufacturing migration, the Southeast is rising. One indication: container volumes at the Port of Savannah are up, with exports representing 55 percent of the traffic.

A slow and steady stream of manufacturers and retailers has been feeling out the U.S. Southeast over the past decade. The trickle began in 2002 following the West Coast port strike, when many shippers swallowed losses and began exploring all-water alternatives from Asia to the U.S. hinterland. Recurring port congestion and cargo bottlenecks eventually opened the floodgates.

U.S. demographic shifts and manufacturing migration have similarly worked in the Southeast's favor.

"The southeastern United States is the fastest growing part of the country, currently representing 44 percent of the total U.S. population," says John Wheeler, senior director of trade development, Georgia Ports Authority. "The region has grown 9.7 percent over the past decade, compared to slightly more than seven percent for the rest of the country. This is where the consumers are."

Beyond demand-driven economic development and trade growth, the Southeast is also the focus of considerable manufacturing and logistics investment. Today's Rust Belt has a Southern accent, and areas of southern Virginia, the Carolinas, and Georgia are benefitting from increasing economic diversity.

Heavy-duty equipment manufacturer Caterpillar recently decided to locate a $200-million, 1,400-job factory in Athens, Ga. "Logistics is a primary success factor for our business, and Athens' proximity to the Port of Savannah will be a major asset," said Mary Bell, vice president of Caterpillar's Building Construction Products Division, in the Coweta County Times-Herald.

Caterpillar's new manufacturing facility will serve as an important pivot in the company's plans to restructure its global supply chain. It wants to re-focus plants in Asia to specifically meet booming construction demands there, and use the Georgia plant and another in Texas to service markets in the Americas and Europe. Three hours away by truck, the Port of Savannah will be used both for importing raw materials and exporting 40 percent of Caterpillar's construction machinery.

"Our exports are currently about 67 percent, versus 43 percent on the inbound side," says Joe Harris, manager, media and public relations, Virginia Port Authority. He expects that trend to continue until the U.S. dollar grows stronger. The U.S.-to-Europe trade lane has always been slow and steady for the Port of Virginia, but opportunities to capitalize on new commodity interests continue to materialize.

"For example, many pellet companies want to export to Europe given the EU's mandate to meet renewable energy goals of 20 percent by 2020," Harris says. Virginia's Appalachian lumber mills position the port to serve this emerging export market.

"Ocean carriers can have a loaded box going both ways; there are no empty miles for steamship lines—or for trucks," says Wheeler. "The carriers then have greater leverage to lower prices for customers." In effect, it creates a more competitive and healthy market because carriers and shippers want to play.

In the not-too-distant future, half the U.S. population will be living in the Southeast (see chart). "The question then becomes, 'How do you serve those consumers?'" says Wheeler.

Transit time is no longer as important as cost. Bunker fuel prices continue to rise. Larger ships and slow steaming become obvious means to reduce total logistics costs. And companies today are more sophisticated in the way they approach and manage their supply chains. With enough visibility to demand, and visibility upstream to points of origin, shippers and consignees can accommodate all-water service from Asia to the U.S. East Coast via either the Suez or Panama canals.

The Panama Canal's imminent expansion adds another dimension to the Southeast firmament. Ports are putting a fresh coat of paint on facilities, dredging harbors, and freshening their sails for a trade wind that will bring New Panamax ships to their berths.

Nevada and Arizona are the fastest-growing states in terms of population percentage, but more densely populated states make the Southeast the fastest-growing U.S. region. Currently home to 44 percent of the total U.S. population, the Southeast continues to welcome new residents, creating opportunities for logistics businesses that serve the region. 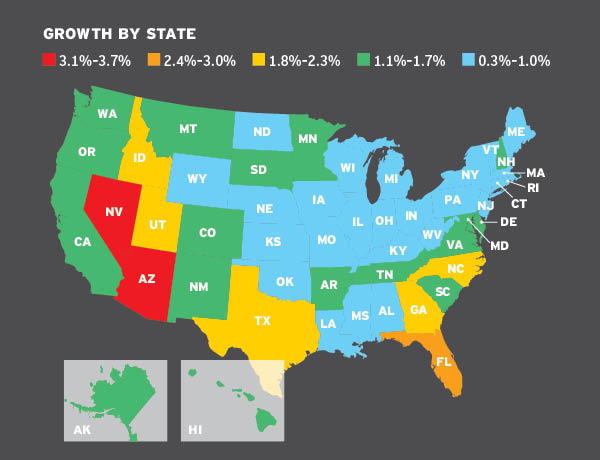 As U.S. consumers carefully monitor their bank account balances, retailers are throwing caution and opportunity to new trade whims as they look to capitalize on other markets and sales opportunities. Companies such as Macy's, Williams-Sonoma, J. Crew, and Crate and Barrel are among several that have started focusing attention on e-commerce sales channels overseas.

While there have been singular examples of companies taking a similar tack in the past—notably Abercrombie & Fitch—this global rush will likely shake up how some companies manage their supply chains. Retailers may be simply seizing offshore demand for de-valued U.S. products while domestic spending remains slack; or, more strategically, looking to establish brand appeal in certain markets where they have brick-and-mortar aspirations.

The strategy presents subtle challenges. Shipping to foreign addresses can complicate ordering systems, and inflate Customs and other transportation fees. Existing warehouse management technologies may not easily adapt to different postal codes—which results in a seemingly simple, yet costly, problem.

Some companies may be testing the waters; others that find traction will inevitably have to consider more sweeping supply chain changes—whether to partner with third-party logistics service providers, merge fulfillment channels, or, in best-case scenarios, regionalize production and logistics to grow sales and reduce total logistics costs.

How ethical can a successful business be without compromising its competitive edge? It's an uneasy question that companies across all industries encounter daily. Ethics is a loaded concept, and performance is stratified among different layers ranging from habitual abusers to good corporate citizens to visionaries and vanguards. It can cover sustainability and fair trade, warehouse labor safety, new-hire protocol, supplier conduct, and countless principles in between. The challenge for profitable companies has always been balancing public persona and private reality.

Recently, Apple has been the most obvious scapegoat—a consequence of its success but also of its marketing machine. In 2009, when the company took a very public stance by dropping its membership in the U.S. Chamber of Commerce over the lobby's position on climate change legislation, it exposed itself to criticism. Consumer watchdogs and media began exploring Apple's own ethics record offshore, uncovering a great deal of negative information about its supply chain practices.

Still, for three years running, Apple has topped Gartner's annual index of the Top 25 supply chains. And judging by the constant buzz surrounding new product launches and the pervasive presence of Apple products in the marketplace, the company's transgressions have been largely ignored by consumers.

Gartner's due diligence in tabulating its yearly results values companies that best demonstrate leadership in applying demand-driven principles to drive business results. In effect, these are companies that best match supply to demand and meet customer expectations.

While Gartner does not yet include aspects of corporate social responsibility (CSR) in its benchmarking (stay tuned for its 2012 list in May), the Ethisphere Institute does. The New York-based international think tank, which advances best practices in business ethics, began publishing its list of the World's Most Ethical Companies in 2007.

In 2012, the list includes 145 companies across 48 unique verticals—from aerospace and defense to transportation and logistics. By comparison, seven companies from Gartner's 2011 Top 50 supply chains made Ethisphere's most ethical list. What does this prove? For one, ethics is not a great consideration in the grand scheme of business performance—unless something goes horribly wrong.

In today's economic environment, companies may be more willing to cut corners and reduce costs than pursue non-obligatory CSR requirements. Perhaps more telling, consumers aren't buying goods and services based on a company's ethics record. They're paying for product availability, quality, price, and customer service. Manufacturers and retailers are following their cue to the bottom line.

Still, companies that manage to uphold a high level of civic responsibility while setting a standard for supply chain excellence should be lauded. It's no small feat.

Because communication is such an important component of collaboration, and filtered, granular-level data is the key to real-time analysis and execution, it's no wonder retail supply chains are trending toward the immediacy and brevity of social media. Online portals and instant messaging are helping companies more effectively share information such as consumer demand and on-time delivery performance with customers, ultimately resulting in fewer stockouts and lower fulfillment costs, according to new Aberdeen Group research.

The report, An Emerging Social Paradigm in the Retail and Consumer Markets, is based on a recent survey of 89 retailers and consumer market suppliers, 44 percent of whom use social networking among employees and trading partners. More telling, another 37 percent of those retailers plan to begin using social media tools in their supply chains within one to two years (see chart).

Sharing information instantly through social media that can connect with virtually anyone involved in a supply chain allows retailers to quickly take action or push alerts. The study also found that companies using social media tend to be more accurate and efficient than laggards: 94.3 percent to 92.2 percent in terms of on-time shipments; 3.4 percent to 7.2 percent in out-of-stock rates; and a 2.4-percent year-over-year increase in fulfillment costs compared to 4.3 percent.

By a ratio of nearly two to one, supply chain professionals agree that one of the biggest barriers to collaborative execution is a slow issue-resolution process— a systemic problem related to information flow quality, in terms of both the granularity and timeliness of shared data.

Similarly, 92 percent of respondents concur that rapid problem resolution is part of good collaboration, which can be defined in terms of both problem solving and organizational learning speed. More than half the respondents indicate that speed of response in truly collaborative relationships is twice as fast as in non-collaborative trading partner relationships.