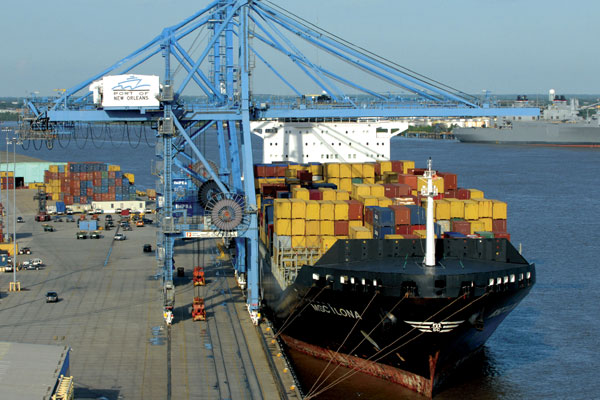 The Port of New Orleans

The considerable environmental impacts from British Petroleum’s (BP) Deepwater Horizon disaster in the Gulf of Mexico have cast a pall over the region, endangering delicate ecosystems and tourism industries alike. But to date, the oil crisis has had little negative impact on shipping in the heavily trafficked corridor.

Gulf trade levels remain fairly constant, reports PIERS Global Intelligence Solutions, a provider of U.S. waterborne import-export statistics. With double-digit growth since January 2010, monthly TEU volumes among Gulf ports dropped by 4.1 percent in April, then resurfaced in May with an eight-percent gain over 2009.

Even as the disaster moved beyond 100 days, inbound container shipments in the Gulf increased a modest two percent to 326,112 TEUs, while outbound shipments increased 13.1 percent or 497,927 TEUs year-to-date.

Of the three main ports closest to the spill’s epicenter – New Orleans, Gulfport, and Mobile – only the latter’s traffic decreased in May 2010. TEU volumes at the Port of New Orleans and the Port of Gulfport swelled 27 percent and 31 percent respectively in May, year-over-year, while traffic at Mobile declined 27.6 percent during the same month.

“We haven’t had any delays or vessel diversions because of the oil spill and we don’t expect to,” says Chris Bonura, spokesperson for the Port of New Orleans. “The ports and the maritime community on the lower Mississippi worked with the U.S. Coast Guard and other federal agencies to establish a series of cleaning stations near the mouth of the river and offshore.”

Farther east along the Gulf Coast in Mobile, that sentiment is shared. Following the disaster, the port requested traffic skirt the spill area and worked with federal authorities to set up port entry protocols for ships and vessel decontamination plans to make sure seaports were not closed because of the growing oil slick.

“No cargo ships, other than those directly involved in the spill response efforts, arrived at anchorage with oil on their hull,” says Judith Adams, vice president, marketing for the Alabama State Port Authority. “We prepared for all contingencies. Vessels came in clean, discharged, and went on their way.”

Manufacturers and retailers are more likely to have executive-level supply chain leaders than five years ago, according to a recent Tompkins Supply Chain Consortium survey of leading companies.

The organizational level of the senior-most supply chain executive has gradually moved higher, according to the executive briefing based on the survey —The Structure of Today’s Supply Chain Organizations. Today, nearly half of polled retail and manufacturing companies have a supply chain leader at or above the executive vice president level.

“With supply chains becoming more dynamic and agile, organizations need to be able to keep up with the pace,” says Bruce Tompkins, executive director of the consortium and author of the briefing. “These companies are beginning to realize the significance of having a high-level supply chain executive influence their business strategies.”

While supply chain leaders are moving up through the ranks and the title Chief Supply Chain Officer is growing in use, some areas within companies still lack collaboration between these executives and other areas of the organization. For example, some companies do not have any part of their supply chain organization responsible for setting inventory targets.

“These gaps in goal alignment indicate significant opportunity for better communication and integration of supply chain functions,” Tompkins adds. “However, companies are discovering these opportunities for improvement, and there is an increasing trend toward resource sharing across divisions and business units.”

When the Massachusetts Institute of Technology (MIT), the military, Toyota Material Handling U.S.A., and artificial intelligence come together, something noteworthy is likely to happen —un-manned lift trucks remotely moving cargo, for example. Over two days at Fort Lee, Va., during the summer of 2010, the U.S. Army Logistics Innovation Agency hosted demonstrations of a robotic Toyota lift truck developed by MIT that is capable of locating, lifting, moving, and placing palletized supplies within an existing outdoor supply depot. The application is ideal for high-risk environments where human safety and security are in jeopardy.

“We chose the internal combustion Toyota lift truck because it can be operated outdoors on packed earth or gravel. With mini-lever control, some of its functionality can be controlled electronically rather than solely mechanically,” says MIT Professor Seth Teller, who is leading the project.

“We are excited to work with the researchers at MIT on this promising application of lift trucks,” adds Brett Wood, president of Toyota Material Handling U.S.A. “Robotic forklifts have the potential to protect both military and civilian personnel working in high-risk environments, such as hazardous material storage facilities.”