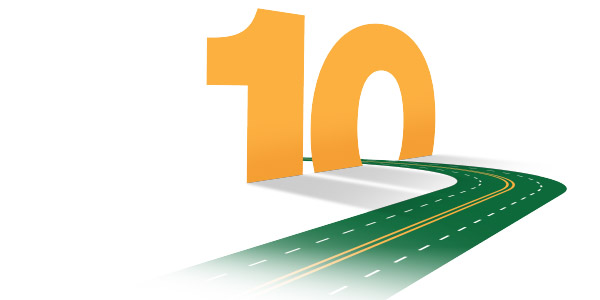 Since 2004, the U.S. Environmental Protection Agency's (EPA) SmartWay Transport Partnership has given organizations that ship freight a set of tools to measure their supply chain's carbon footprint and make better decisions about how to reduce it.

To mark SmartWay's 10th anniversary, several shipper partners share their best tactics for getting the most out of the program:

1. Identify your corporate goals. In 2010, for example, The Home Depot pledged to remove 20 percent of greenhouse gas emissions from its domestic supply chain by 2015. From a supply chain perspective, that's the equivalent of eliminating 200 million distribution miles in five years.

"Transportation is a significant piece of our carbon footprint and SmartWay helps us quantify how much we actually account for," says Ron Guzzi, Home Depot's senior manager of transportation. "When you can measure your emissions, you can take steps to meet your goals."

As of 2013, through a range of strategies including SmartWay best practices, Home Depot reduced more than 1.98 million tons of CO2 emissions while adding new stores and distribution centers. In 2013 alone, the company cut CO2 from truck emissions by 2.2 percent, a reduction of 57,232 tons.

2. Use SmartWay-registered carriers. "We no longer ask a carrier if it is SmartWay-registered. Instead, we ask for a SmartWay registration number so we can determine the extent to which the carrier participates in the program," says Jason Eitel, who manages the prospective carrier process for Best Buy.

Today, the retailer requires carriers to become SmartWay-registered before they can be included in the Request for Proposal (RFP) process, and promotes the program by including SmartWay language in its RFPs and transportation service agreements.

3. Support your SmartWay transport providers. "What makes SmartWay so good is that it's voluntary, and each carrier can choose whatever practice works best," says Harry Haney, associate director of customer development, Kraft Foods Group. "We communicate our expectations, and leave it to each carrier to find ways to meet them."

Shippers can support their carriers by enlisting the EPA for technical expertise and training. "We've had SmartWay representatives attend our carrier meetings to explain the program and share best practices," Haney says. "It's a free service when you're part of SmartWay."

4. Collaborate with like-minded companies. Sun-Maid, the raisin cooperative, manages more than 450 unique SKUs and 2,900 ship-to locations. "The majority of our outbound grocery business is less-than-truckload, not truckload," says John Slinkard, vice president, supply chain. "We don't have the volume ourselves to create the efficiencies we strive for, so we collaborate with others on load consolidation and warehousing."

5. Shift to more efficient modes. Because carriers across all modes report CO2, NOX, and particulate matter emission factors through SmartWay, shippers can use the data to choose the most efficient mode, and accurately quantify impact on a shipper's carbon footprint.

For example, Best Buy increased its intermodal use to 58 percent of inbound loads in 2013 from 54 percent the previous year. By analyzing emissions data, it determined that those four percentage points reduced carbon emissions by more than 2,700 tons. The company now uses intermodal on lanes it never would have considered previously.

7. Make a public commitment. SmartWay gives customers, shareholders, suppliers, and the public a trusted source of information about a company's carbon footprint.

8. Quantify the impact of your operations. The SmartWay program can help you measure the effect of operational decisions on sustainability goals.

For example, Best Buy initiated a weekly backhaul program to move electronic waste from stores to recycling plants: in 2013, the company moved about 96 million pounds of consumer electronics and 77 million pounds of appliances. In addition to the operational benefits of moving recyclable waste out of the stores, Best Buy used SmartWay data to help measure the program's effect on carrier equipment utilization and empty miles, two key tenets of Best Buy's sustainability initiative.

9. Support your decisions with data. Supply chain managers are having tough conversations about balancing urgency and sustainability in the supply chain. They want to know: What's the cost of moving inventory by more fuel-efficient modes?

"As we have these discussions, we can come to the table and show how intermodal, for example, would be better from a cost and emissions standpoint because it contributes to our corporate sustainability objectives," says Guzzi. "It's hard to argue against a decision that's better both for our bottom line and for the environment."

10. Leverage the EPA's resources. The EPA is comprised of teams of experts who can provide technical expertise, data analysis, and training for shippers and transportation providers. These services are free to SmartWay partners: shippers can save resources by not having to use consultants, or proprietary methods or complex tools.

The Buck Stops at Procurement

Sourcing and procurement functions have become areas of "core incompetency," costing North American businesses as much as $1.5 billion per year and wasting 32 million man hours, according to a new survey conducted by Topline Strategy Group on behalf of cloud technology company SciQuest. In effect, a huge gap separates the technology buy from its execution.

Topline Strategy Group surveyed 241 sourcing and finance professionals at more than 200 U.S. companies with $500 million in revenue to determine the steps organizations can take to achieve a positive return on procurement investments.

The research, Optimizing Your Sourcing and Procurement: Five Simple Rules, finds only 28 percent of sourcing and procurement professionals believe their procurement system makes them more productive; this despite the fact that North American companies spent more than $1.4 billion on enterprise software applications in 2013 alone.

"Organizations are falling well short of these transformative benefits," he adds. "The concept of turning spending into a source of savings takes some getting used to, but it's an idea that more purchasing and sourcing professionals need to embrace."

1. Choose the right software. More than 50 percent of respondents who are not satisfied with their procurement systems cite a convoluted user interface as a reason for dissatisfaction, while a whopping 38 percent say that their system lacks critical features that limit what can be done.

2. Don't get caught up in vendor standardization. Only 16 percent of respondents who use two applications from the same vendor rate both as making them "much more productive."

3. Invest in implementation. Seventy-three percent of companies that say the implementer "did a great job and added a lot of value" are either extremely satisfied or very satisfied with their system.

5. Use software that is easy for casual, occasional users. Seventy-eight percent of respondents believe that employees would find better deals and save their company money if corporate procurement tools were easier to use. Eighty-one percent believe that easier-to-use tools would reduce rogue spending.