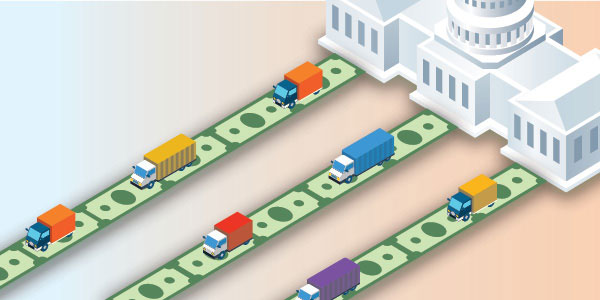 News that U.S. Congress and President Obama are about to finalize a two-month extension to the lame duck Highway Trust Fund has elicited mixed reaction from industry. Some are optimistic because legislators were able to push through a bill without undue delay, especially as summer construction work picks up. But for many in the transportation and logistics sector, it's déjà vu all over again as Congress kicks the can down a crumbling road.

Beltway bloviators have labored for years to divine an appropriate mechanism that will finance much-needed infrastructure projects across the country. A well-developed and diversified transportation network that leverages rail, road, and port connectivity to reduce transportation and logistics costs has long been the key to U.S. trade competiveness. But that advantage is beginning to wane—and with it, perhaps, the promise of a U.S. manufacturing renaissance.

The American Society of Civil Engineers' (ASCE) quadrennial Infrastructure Report Card, most recently published in 2013, gave the United States an overall grade of D+. The Reston, Va.-based lobby estimates that America needs to invest $3.6 trillion by 2020 to maintain existing infrastructure across all sectors. Given current circumstances, that target seems untenable.

The problem is that Department of Transportation (DOT) spending and revenue—at both the state and federal levels—are arcing in opposite directions. A fixed gas tax, which funds the Highway Trust, hasn't been adjusted for inflation since 1993. As motor vehicles become more fuel efficient, revenues aren't keeping pace with infrastructure need.

Absent a national transportation and energy policy, states have been forced to go it alone, with mixed fortunes. Along the way, the federal government has made feeble attempts to stimulate progress.

The first few rounds of TIGER funding were peculiarly directed toward non-freight bicycle, pedestrian, and mass transit projects in areas of the country where any sniff of utilitarian reason went wanting. Invariably, freight doesn't always rate when it comes to pork barrel politics.

Through six rounds of funding to date, public transit projects (including bikes and pedestrians)—which represent 22 percent of the total number of awards—have garnered nearly 30 percent of the $4.1 billion in total grants. And not all "road" projects have been dedicated to freight.

For example, during the 2010 funding cycle, the State of Oregon's section of the West Coast Electric Highway project—which has created a corridor of electric vehicle charging stations every 25 to 50 miles along Interstate 5 in the Pacific Northwest—received $1 million from American Recovery and Reinvestment Act funds, and more than $3 million from TIGER. Washington, Oregon, and California lead the country in terms of electric vehicle ownership. But these green cars still account for less than one percent of total U.S. automobile sales.

Not surprisingly, Washington and Oregon's DOTs are currently strapped for cash because gas tax revenues are dropping faster than an electric car's speedometer. To their credit, both states are earnestly looking at new ways to generate revenue. Washington charges electric-vehicle owners an annual $100 registration fee. Oregon is going one step further by piloting a pay-per-mile scheme for all vehicle types that aims to replace the gas tax.

Beginning in July 2015, 5,000 volunteers will be allowed to sign up for Oregon's trial program, which uses special devices to collect information about how much they've driven and where. Drivers will agree to pay $0.015 per mile traveled on public roads in state. Those who are using gas-guzzling vehicles will receive credits for fuel tax charges they pay at the pump.

Electric vehicle owners and civil liberty groups have expressed concern regarding the new program. But Oregon is making a concerted effort to fix a problem it created—and, in the long run, the state may pioneer a revenue system that benefits others.

"With respect to surface transportation, predictability of funding is almost as important as volume of funding," Steenhoek explains. "Most states develop a five-year plan for maintaining and improving their system of roads and bridges.

"Much of this construction work is reimbursed to the states by the federal government," he adds. "If it is not a reliable partner in funding transportation, states will be less confident to proceed with planning and executing many essential and expensive infrastructure projects."

Calling for a robust freight transportation plan, the Coalition for America's Gateways and Trade Corridors (CAGTC), based in Washington, D.C., has outlined a National Strategic Freight Mobility Program and Trust Fund that incorporates four key pillars:

"Freight mobility—on all modes—requires added capacity and improved efficiency to keep pace with growing demands," according to CAGTC. "And connectivity among the modes is key to efficient goods movement. Based on estimates of freight system needs, we believe a minimum of $2 billion in additional public investment is necessary on an annual basis."

Where that extra $2 billion per year comes from is the crux of the funding problem. But states are catching on. Several passed legislation that pegs gas taxes to inflation or the price of fuel, helping to fill the current void. Others made concerted legislative efforts to ensure that money collected for transportation infrastructure projects are allocated specifically for that—and not siphoned off from a general slush fund.

On a national scale, in April 2015 a bi-partisan group of U.S. congressmen introduced a bill that would similarly index federal fuel taxes in accordance with inflation. They have also proposed establishing a commission to find alternative funding sources and/or periodically raise motor fuel taxes to cover the remaining shortfall for the next decade.

"The future of transportation lies not just in building new roads, but in bringing intelligence to every asset in the U.S. transportation network—from roadways and private vehicles to commercial truck fleets and public transit systems—thereby making transportation safer, more accessible,and more efficient," according to the report.

ITIF's recommendations are ambitious—perhaps too ambitious for a Congress that has been saddled by bureaucracy and indecision. But it demonstrates the type of innovative thinking required to formulate a long-term roadmap. Intelligent infrastructure is the future.

The consensus among industry observers is that the United States needs a consistent and flexible funding mechanism that allocates revenues toward critical infrastructure projects that meet specific, merit-based criteria. Restructuring the federal gas tax is a first step. Whether Washington can get it together after this latest extension expires remains to be seen. Unfortunately, freight transportation stakeholders have been down this winding, potholed road before—33 times in six years to be exact.

Let's hope it's not déjà vu all over again come August 2015.

E-commerce is rapidly changing the way that retailers do business as new rules of engagement emerge and evolve. While industry direction has been largely "lawless" thus far, a new GS1 standard for listing and classifying products across e-commerce platforms aims to bring more clarity and consistency to the online marketplace.

"The GS1 US Simple Product Listing will help us standardize and simplify that information for sellers by reducing the complexity of data integrity challenges within our ecosystem," he adds. "This technology enables eBay's consumers to more effectively find what they are looking for across our global marketplace of more than 800 million listings."

In effect, the new standard empowers trading partners to use a single set of consumer-friendly terms that are linked to their existing internal product hierarchies so that consumers are presented with the same trusted information across all channels. By bridging the gap between retailers and suppliers, and providing an automated product classification system, users can streamline operations through more efficient data handling processes, which helps reduce costs and accelerates speed to market.

What Keeps Risk Managers Up at Night?

Travelers Insurance Company has its clients covered. But what forces companies to seek shelter under the red umbrella in the first place? The New York City-based insurance company recently released its 2015 Travelers Business Risk Index, which polled more than 1,200 risk managers to differentiate whether certain threats cause them to "worry a lot" or "worry somewhat."

Medical cost inflation (24 percent) and cyber risk with regards to data breaches (23 percent) are the top two business concerns, according to the 2015 report. Increasing employee costs (21 percent), liability (21 percent), and regulatory compliance (20 percent) round out the top five worries.

While fears over medical cost inflation are still latent, concern dropped from 67 percent in 2014 to 60 percent in 2015. Risk managers also responded more favorably regarding rising employee benefit costs, which saw a drop from 62 percent to 56 percent. This is to be expected after businesses have had time to absorb the possible implications of the Affordable Care Act.

Meanwhile, security fears continue to build as the big data trend sweeps industry. Making the greatest leap from fifth in 2014 to second this year, concern over cyber risk has grown considerably, particularly among large businesses—nine out of all 10 industries surveyed report cyber risks and data breaches among their top five concerns.

While risks invariably change over time, how businesses limit their exposure is a constant challenge. The gap between how much U.S. businesses worry versus how prepared they are to manage these risks remains large. In fact, the top concerns are often among the three to five risks businesses feel the least prepared to handle. 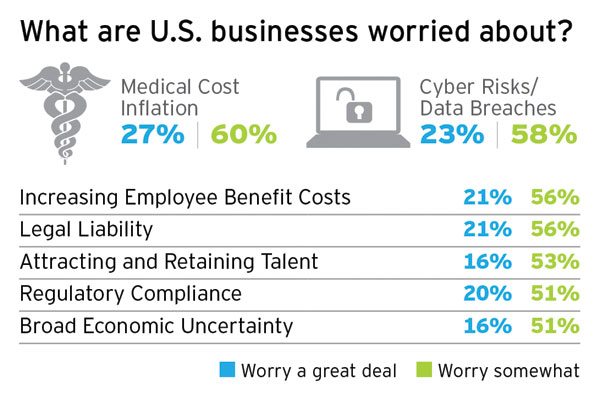