As debate about the Keystone XL pipeline continues to rile industry, politicians, and environmentalists, the railroads are minding their own booming business. The volume of crude oil hauled in U.S. freight trains more than tripled in 2012, as production from shale formations surged.

The railroads remain an attractive option for oil producers because pipelines haven't kept up with production for many reasons—notably the delay as the State Department deliberates whether TransCanada can build an 875-mile northern extension to the Keystone Pipeline project linking Nebraska to Alberta, Canada.

The State Department recently issued an environmental draft suggesting that denying the Keystone XL permit would have no impact on climate change because oil sands development would go ahead regardless, using other pipelines and railroads to move product. Opponents argue that blocking the pipeline would create a transportation bottleneck that would ultimately slow down drilling.

While pipeline politicking runs its course, U.S. and Canadian railroads have been busy investing in new track and facilities to capture the lucrative Canadian crude. Producers and refineries have similarly been acquiring tank cars to address capacity needs and reduce costs.

Energy is currently the biggest story for CN, notes Jean-Jacques Ruest, the rail carrier's executive vice president and chief marketing officer. With so much capital flowing into the Canadian and U.S. energy sectors, producers and refineries are challenged with getting crude product to global markets, and achieving a return on that capital investment.

"They need the logistics that gets them physically to good-paying markets without having to wait two years, five years, or a decade for permitting or construction to begin," Ruest says. "That's where the railroad comes in."

The North American rail network presents a competitive option to pipelines because shippers have flexibility to "go anywhere from anywhere," says Ruest. By example, CN's rail network extends from Fort McMurray and Edmonton, Alberta, south to New Orleans and Mobile, mirroring the Keystone Pipeline's path. "More crude producers and refineries see that the Keystone Pipeline does exist. It's called the rail line," he adds.

Last-minute holiday shopping no longer means running to the mall and fighting the crowds to get the right gift. Consumers can click a mouse at home and expect the same service, with less stress. E-commerce companies are adequately meeting the transportation challenges of the peak season rush by providing same- and next-day delivery, which is driving demand for multichannel-capable distribution centers, according to a Jones Lang LaSalle report.

"Retailers are anxious to create effective multichannel strategies that cater to new customer expectations, such as same-day delivery, e-commerce, and mobile commerce," says Kris Bjorson, head of Jones Lang LaSalle's retail/e-commerce distribution group. "This means re-evaluating their supply chain networks and distribution models down to one of the most important components: their distribution centers."

Logistics typically accounts for 80 percent of operating costs, while real estate accounts for less than 5 percent. 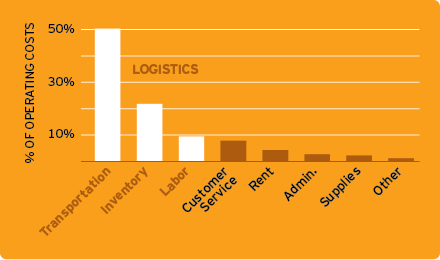 Consumer-driven location selection. Demand plays a larger role in site selection when goods must arrive on quick turnaround. There must be access to rail, highways, and air transportation; and available and affordable labor to staff distribution centers.

"In addition to the facility's up-front capital costs, retailers have to plan for other costs associated with increasing automation, such as investments in materials handling systems, conveyor sortation and controls, warehouse and inventory management software, and picking/packing technology," adds Bjorson.

The latest installment in America's "war on trucking" features the American Automobile Association (AAA) voicing its opposition to a House bill that would increase truck size and weight on federal highways beyond the current 80,000-pound maximum, according to a recent article in Land Line magazine.

The two-year highway bill, Moving Ahead for Progress in the 21st Century, or MAP-21, calls for a comprehensive study of the effects of truck size and weight on highways, safety, and the economy. U.S. Reps. Michael Michaud (D-ME) and Reed Ribble (R-WI) have sponsored another bill, HR612, which goes one step further by lobbying for states to have the power to increase truck weights from the current 80,000 pounds on five axles to 97,000 pounds on six axles.

The truck weight debate has drawn mixed reactions within the motor freight industry. The American Trucking Associations (ATA) supports both pieces of legislation, and contends that heavier and longer loads are safer, greener, and more efficient. Shippers also stand to benefit by transporting larger loads on a per-mile cost basis.

On the other side of the argument, owner-operators and some smaller trucking companies oppose HR612, saying such an amendment would negatively impact safety and infrastructure issues. More importantly, the bill would likely put them at a competitive disadvantage against larger carriers. At the very least, and in accordance with AAA's position, they are urging policymakers to wait until MAP-21 study results are complete to make any decisions.

Meanwhile, Idaho's Senate recently backed a plan aimed at allowing big trucks on more miles of state roads, a measure pushed by the Idaho Trucking Association to reduce shipping costs and boost the economy. It now heads to the House for further voting.

Since 2003, Idaho has allowed 129,000-pound trucks on select southern routes. The state has become a favored corridor for delivering mining equipment north to the Canadian oil sands. With this new proposal, big trucks would be allowed on more of the state's roads, provided local highway districts agree on criteria set by the Idaho Transportation Department.

Proponents argue local agencies will still have power to turn down expansion. Others believe this could make Idaho's roads more dangerous—and disadvantage smaller trucking companies that don't have big equipment.

As retailers move to a more just-in-time fulfillment strategy to manage demand fluctuations in a soft economy, CPG manufacturers have to moderate their own fulfillment and transportation operations—often at greater expense and risk. The challenge is particularly acute for mid-sized businesses that lack the volume and resources of larger competitors.

Size does indeed matter when it comes to communication, collaboration, and strategic alignment, notes the report. Retailers tend to focus on suppliers that provide the largest proportion of their products and drive revenues. Mid-sized CPG companies say they struggle to convince retailers to invest energy in a partnership with a smaller organization.

Retailers often dominate the relationship, and change service requirements without regard to cost implications. Manufacturers find themselves challenged by shorter order cycle times, delivery of shelf-ready products, and lack of forecasting information.

To achieve greater collaboration and alignment with retailers, leading mid-sized companies are making strategic investments in their supply chain capabilities. Key spending priorities include: software and technology; training and development; and facility improvements.

Ultimately, mid-sized CPG companies need a flexible and resourceful mindset to succeed in this stringent "comply or be fined" environment, the study summarizes. As one mid-sized manufacturer says, "The big boys have all the access, resources, and leverage. We have to be more creative and innovative to maintain our relationship with retailers."

Amid speculation about how natural gas could impact U.S. energy dependence, and change the country's manufacturing and economic development fortunes, the railroads have made a concerted effort to invest and expand hinterland infrastructure to support this new growth market.

But BNSF's announcement that it will begin testing a small number of locomotives using liquefied natural gas (LNG) as an alternative fuel later in 2013 further demonstrates the carrier's pioneering sustainability agenda.

"The use of liquefied natural gas as an alternative fuel is a potential transformational change for our railroad and for our industry," says Matthew K. Rose, BNSF chairman and CEO. "While we also face other daunting technical and regulatory challenges, this pilot project is an important first step that will allow BNSF to evaluate the technical and economic viability of the use of liquefied natural gas in through-freight service.

BNSF is working with the two principal locomotive manufacturers, GE and EMD, a unit of Caterpillar, to develop the natural gas engine technology it will use in the pilot.

Weak demand for air cargo, however, marks the second successive year of decline, following a 0.6-percent contraction in 2011 when the freight load factor was 45.2 percent.

For some types of product, air carriers face increasing competition from the ocean shipping industry, especially as shippers become more savvy in managing their supply chains and speed-to-market needs.

But a battle is waging inside the industry. Combination carriers continue toreap the benefits of maximizing load factors across assets, while air freighters remain consigned to streamlining fleet capacity, seeking cargo alliances, and targeting new growth markets. If belly capacity continues to grow with passenger demand, and surpasses new cargo demand, it will place even more pressure on pure freighters to fill assets.