Greyhound Lines has long provided time-critical parcel delivery service, though its relevance over the past few decades has been largely overshadowed by the growth of expediters such as FedEx and UPS. Now, to better synchronize its PackageExpress business, the iconic intercity passenger bus company has tapped One Network's demand-driven Real Time Value Network (RTVN) and parcel management service.

A growing need for capacity and economy in today's freight market is creating new opportunity for the bus company. Its partnership with One Network suggests a chance to capture some of this market share.

"Traditional parcel management systems are homegrown, and have difficulty connecting with other homegrown systems," says Aaron Pittman, spokesperson for One Network. "This isn't a problem for companies such as UPS or FedEx that have large global networks.

"But smaller parcel management companies such as Greyhound need to interline with other partners and their systems to provide optimal service," he adds. "If they can't, it limits their growth and ability to compete with larger companies."

The Dallas IT company's cloud-based RTVN, which is a many-to-many network platform, connects to all homegrown systems. This enables smaller parcel providers to easily collaborate and offer their customers end-to-end visibility from order placement to delivery to payment reconciliation—just as one might expect from larger players.

Making Service Adjustments On the Fly

Joining a cloud-based network also allows Greyhound to more easily and quickly adjust offerings—adding a new service area or changing a delivery point—compared to hard-wired, point-to-point systems. And the bus line can immediately expand its potential customer base by tapping the 30,000-plus companies that currently use RTVN.

The greater benefit and trend line, from a freight utility perspective, is that this application of technology creates additional capacity by connecting regional parcel providers in a mode that has traditionally been passenger-oriented. Airlines have long relied on combi carriers to haul cargo on commercial flights, and scale capacity to demand. On the rail side, Amtrak also offers small package and less-than-truckload services between cities it serves.

Finding innovative ways to add freight to modes that already exist will be yet another strategy shippers and carriers target as they address looming capacity shortages in over-the-road networks.

Mediterranean Shipping Co. (MSC), the world's second-biggest container line, recently deployed the largest vessel on a U.S. route in response to swelling demand for goods from Asia, according to a recent Bloomberg article. And there's more where that came from.

The ocean carrier dispatched the 13,800-TEU MSC Beatrice in the Asia-U.S. West Coast lane from China to Long Beach after previously operating the vessel in its Asia-Europe service—a sign of the degree to which Europe's economic woes are impacting ocean freight trade and routings.

Ships transporting containers between the United States and Asia are operating at about 95-percent capacity, compared with about 80 percent for vessels sailing to Europe from Asia—which has helped raise rates for U.S.-bound ships while the cost of carrying cargo to Europe has fallen.

MSC is positioning capacity where demand remains relatively stable, while removing ships from a trade lane that has been hard hit by the global recession. Rationalizing capacity between Asia and Europe also allows the steamship line to artificially stabilize rates.

While 10,000-TEU containerships have generally been utilized to ferry large volumes in the trans-Pacific region, the Panama Canal expansion will bring even more mega-ships to the U.S. East Coast, where ports are ramping up efforts to expand infrastructure. The MSC Beatrice's arrival is the first ripple of a much larger wave.

When your materials handling investment nearly matches the cost of purchasing a 462,000-square-foot building, expectations soar through the roof. Urban Outfitters' new Web fulfillment center in Stead, Nev., is expected to help the Philadelphia-headquartered company double its online shopping revenue stream, according to a recent article in Northern Nevada Business Weekly.

Apparel retailer Urban Outfitters supplements its store revenue with a growing e-commerce business that currently accounts for 20 percent of its sales.

The retailer's investment represents an example of how e-commerce demand is radically changing the distribution landscape—inside and out.

The $55-million distribution center is equipped with a $25-million materials handling system installed by Dutch integrator VanDerLande Industries. It features three miles of conveyor belts, 11 miles of walkable pick face, and more than 50 miles of electrical cabling. The system is capable of dispatching about 4,300 parcels (25,000 parcels per shift) and sorting 9,000 individual items per hour. A package can be picked and packaged for shipping in as little as 18 minutes; with expedited shipping, an item can be on a truck two hours after a customer places an online order.

Currently, the site handles about 20,000 items, but that number could grow to 150,000 individual products as Urban Outfitters' e-commerce business continues to expand.

"The Internet business is roughly 20 percent of sales," says Ken McKinney, executive director of logistics for Urban Outfitters. "We think 50 percent is not an unreasonable expectation. Eventually, we are going to cap our store growth, so the Internet becomes the next vehicle to generate revenue. In the future, this facility will represent 30 percent of our Internet business volume."

When discussing the ramifications of complying with further government safety and Hours-of-Service regulations, truckers raise concern over the difficulty of recruiting from a shrinking pool of qualified drivers. 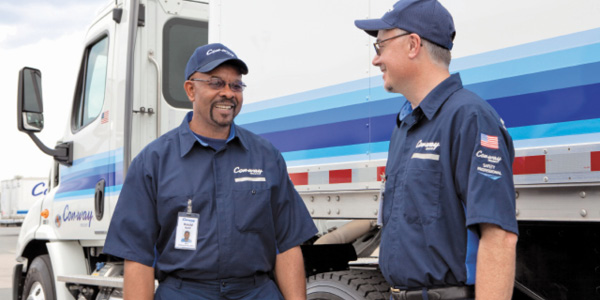 Truck drivers with good safety records are in high demand, thanks to increased freight volumes and government regulations affecting hiring.

The turnover rate for linehaul truckload fleets of all sizes surged in the second quarter of 2012, with larger fleets breaking the 100-percent barrier for the first time in more than four years, according to the American Trucking Associations' (ATA) quarterly Trucking Activity Report.

For large operators—those that report more than $30 million in revenue—driver turnover rose 16 percentage points to 106 percent. This marks the highest level since the fourth quarter of 2007. The last time the turnover rate reached more than 100 percent was in the first quarter of 2008.

"We continue to see steady—albeit sluggish—growth in freight volumes, which increases demand for drivers," says ATA Chief Economist Bob Costello. "That growth, coupled with continued pressure on fleets to improve safety records as a result of regulatory oversight changes, is increasing competition among carriers for drivers with clean histories."

At smaller truckload fleets, turnover climbed to 86 percent in the second quarter, a 15-point jump over the previous quarter. The spike put turnover at its highest level since the third quarter of 2007.

"The driver shortage is by and large qualitative, rather than quantitative," Costello notes. "Despite some estimates, in terms of raw numbers, the trucking industry is currently short 20,000 to 30,000 drivers.

"If freight volumes continue to grow, however, that number will rise in the near future, exacerbating the qualitative shortage, and creating a quantitative one," he adds.

Growing freight volumes may be a welcome challenge. But gamesmanship among competing carriers looking to lure away qualified talent will be cause for concern.

Drivers are already leveraging their value into more lucrative jobs, which will continue to increase turnover rates and make it even more challenging for smaller carriers to retain top driving talent.