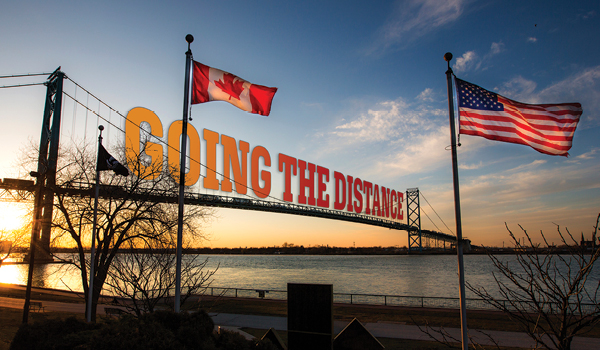 With a new treaty in hand, the long-established trade relationship between the United States and Canada continues to thrive to the benefit of both countries.

For all the political rhetoric on the international stage as governments and economies change, the relationship between the United States and Canada remains extraordinarily civil and cooperative. Each country recognizes the benefit of the other.

And the picture gets better over time. Some cases in point, from the Office of the United States Trade Representative:

"The trade relationship between our two countries remains very strong," says Paul Tessy, senior vice president, Purolator International. "Almost $1.7 billion in goods crossed the border each day during 2018, a rate that marked a 6% increase over the prior year. And this growth came despite a very loud and public discussion about trade issues."

Purolator International, based in Jericho, New York, about 25 miles from New York City, is the U.S. subsidiary of Ontario-based Purolator Inc., Canada's leading provider of integrated freight and parcel delivery services. With its feet firmly planted in both countries, Purolator International has an ideal perspective of the financial ebbs and flows by which trade is measured.

"While it is true that exports to Canada were soft in April compared to last year, Canada remains our top export market," Tessy points out. "That said, there is reason for optimism that this relationship will recalibrate as key trade issues are resolved. We recently saw agreement on steel, aluminum, and retaliatory tariffs, and we're now seeing momentum on the USMCA."

On the Fast Track

Businesses that ship goods that fall below the de minimis threshold do not have to follow "formal entry" procedures. This means a faster and less onerous clearance process for businesses that tend to ship goods valued at less than $150 (CAD), while also being a win for Canadian consumers who shop from U.S. e-commerce retailers.

The U.S. and Canadian markets are not monolithic, of course, and it is important for U.S. businesses to understand key differences—some of which are legal requirements, and some of which are deeply rooted cultural nuances. Canada is officially bilingual, with 23% of the population speaking French at home. In the province of Quebec, almost 95% of the population speaks only French at home. This bilingualism is reflected in Canada's marketing and labeling requirements. Every label must be listed in French as well as in English, with other requirements (such as measurements) listed in metrics, and Canadian currency valuations.

Pricing is another key consideration. "Products generally cost more in Canada for a number of reasons," Tessy says. "These include the relatively small size of the market (37 million Canadians versus 327 million Americans), transportation costs, and unavoidable customs fees and duties."

A business also will need to become familiar with Canada's sales tax system. All products entering Canada are assessed a 5% Goods and Services Tax (GST). Depending on the province or territory to which a product is headed, a product may also be assessed a Provincial Sales Tax (PST), Harmonized Sales Tax (HST), and/or a Quebec Sales Tax (QST).

U.S. businesses can help themselves by taking the time to learn about the "distinctly Canadian" aspects of the market, says Tessy. A good place to start is the "Doing Business in Canada" commercial guide produced by Export.gov, which is the primary U.S. government online resource for businesses interested in export opportunities.

Purolator International also stands ready to help businesses navigate through the thicket. "Purolator International's strength is that we not only transport shipments to Canada, but we also manage the customs process that moves goods across the border," Tessy says. "And we then ensure seamless service within the Canadian market.

"We offer comprehensive service from point of pickup in the United States through end delivery in Canada," he adds. "No other U.S. logistics company can match our Canadian expertise or capabilities in that market.

"As a subsidiary of Purolator Inc., we have access to a distribution network that extends to every province and territory, and enables innovative solutions within the Canadian market," Tessy notes.

That distribution network is now poised to get even better. Purolator Inc. recently announced a $1-billion growth strategy that includes a new $330-million, 430,000-square-foot national hub set on 60 acres in Toronto, Ontario, set to open in 2021.

It also includes an $8.5-million, 110,000-square-foot terminal in North York that will add up to 135 delivery routes. This terminal will open in September 2019 in time for peak season. These new hubs will allow for faster fulfillment for both courier and e-commerce shipments from the United States throughout Canada.

"Today's supply chain has changed," Tessy says. "Investing $1 billion in our Canadian network will ensure that we continue to offer superior customer service and unmatched delivery capabilities in Canada.

"Our Canadian expertise extends beyond deliveries," he adds. "For regulatory issues, we take many steps beyond compliance with customs mandates. For example, we encourage qualified businesses to take advantage of Canada's Non-Resident Importer (NRI) program."

The NRI program allows participating businesses to collect Canadian sales taxes and brokerage fees at time of purchase. Without NRI status, a U.S. business could face the prospect of its Canadian customer being presented with an unexpected invoice at time of delivery.

Purolator International continues to develop innovative solutions to help U.S. businesses succeed in the Canadian market, Tessy says. One such solution, called "CanadaOne," can be described as an "all of the above" strategy utilizing both ground and air resources. Shipments are picked up in the United States and undergo a consolidation process, whereby smaller shipments are combined into a single larger unit.

The consolidation step adds a high degree of efficiency, since the single unit can clear customs as one unit and incurs reduced customs and brokerage fees.

Once in Canada, shipments enter Purolator's extensive courier or freight network for final delivery. CanadaOne offers two-day guaranteed delivery to the Canadian market, and is ideal for U.S. businesses that need to provide regular inventory or parts replenishment to their Canadian customers.

Time is money, and nowhere is that truism more applicable than in logistics, where the objective is to turn days into hours and hours into minutes. That effort is the driving force behind the increasing importance of Rickenbacker International Airport in Columbus, Ohio. The airport, named for legendary World War I flying ace and Columbus native Eddie Rickenbacker, is one of the world's only cargo-dedicated airports.

"Lots of cross-border trade shipments transit to and from Canada every day," adds Whitaker, who points out that 48% of the U.S. population is within a 500-air mile radius of the Ohio capital city.

Not only does that radius encompass traditional gateway cities such as Chicago and New York, it also includes Toronto and extends deep into Canada's population base. "Those are pretty stunning statistics," Whitaker says, referencing the position of Columbus relative to the North American population.

Those statistics have contributed mightily to Rickenbacker's growing importance as a logistics launching point and an attractive alternative to more congested sites. The airport plays an essential role in the strength of the Columbus inland port, one of the largest U.S. integrated logistics complexes.

Air Canada Cargo uses Rickenbacker for supplemental lift for its air cargo operation. "They route some Air Canada-sold freight via Rickenbacker International and then truck it to Canada for distribution to their customers," Whitaker says. He cites Triple T Transport, based in nearby Lewis Center, Ohio, as a trucking broker that works with Canadian trucking companies to move freight between Columbus and Canada.

"We have 20 scheduled flights every week, utilizing six international airlines," Whitaker says. "The industry remains very interested in Rickenbacker and our activity continues to grow. An important component of that activity is Canadian shipments. We've demonstrated that we can work very effectively with ground transportation companies such that border crossings are done seamlessly and do not interfere with commerce."

At Rickenbacker, the Airport Authority operates Foreign Trade Zone 138, rated among the top 10 FTZs in the country based on the value of goods moving through the zone. "U.S. companies can receive goods into the zone without paying duty," Whitaker says. "They only pay duty on what remains in the United States and only after it leaves the zone."

In the past year, AirBridgeCargo, the leading all-cargo carrier based in Moscow, as well as China Airlines, based in Taipei, began serving Rickenbacker. Meanwhile, FedEx, UPS, and other international airlines including Cargolux, Cathay Pacific, Emirates, and Etihad turn to Rickenbacker for its ease of handling.

"The industry is taking note that Rickenbacker is a real solution with fewer headaches for airlines, shippers, and forwarders," Whitaker says. "We work diligently to make sure the industry is aware of what we offer."

Located about 13 miles south of downtown Columbus, Rickenbacker Airport features two parallel 12,000-foot runways capable of handling the world's largest aircraft. The airport, which has a Category I and II Landing System for all-weather landing capabilities, is open 24 hours a day, 7 days a week, 365 days a year. There are no nighttime noise restrictions. U.S. Customs and Border Protection is offered onsite.

The airport is adjacent to the Norfolk Southern Rickenbacker Intermodal Terminal and has convenient access to John Glenn Columbus International Airport, where a diverse mix of air carriers offers more than 150 daily departures to 40 destinations.

In logistics, the term "border security" has everything to do with opening country-to-country passageways as quickly and efficiently as possible, making border crossings seamless and trouble-free. Given the extraordinarily friendly and mutually respectful trade relationship between the United States and Canada, whether you are moving goods from here to there or from there to here, the stage is set for safe and secure transportation.

Still, following the rules is paramount to success. Polaris Transportation Group, known for its scheduled LTL service between Canada and the United States, brings a quarter-century of expertise in those rules to every border crossing. To ensure safe and secure transit, Polaris participates in every border security program—C-TPAT (Customs Trade Partnership Against Terrorism), PIP (Partners in Protection), CSA (Customs Self- Assessment), and FAST (Free and Secure Trade).

Understanding this alphabet soup of programs enables Polaris, which specializes in the shipment of dry goods, to move its modern fleet of trucks without costly delays. The company's scheduled service connects Ontario and Quebec markets with the United States through a combination of its fleet and facilities along with those of its long-established partner carriers.

"Shippers want to know that their cargo is being handled professionally and efficiently," says Cox. "From the get-go, we have been at the front of the line. As a small company, we needed to legitimize ourselves by staying on top of the standards."

The company also differentiates itself through cutting-edge technology. "We've embarked on a journey, not just for ourselves but for digital business lines," says Dave Brajkovich, chief technology officer. "We're becoming more of a technology company that has trucks. We're setting a path for the industry."

This approach, Brajkovich says, translates into "better, faster, smoother" transmission of information. "We don't just pass documents, we pass data. That saves a lot of time," Brajkovich says. "Data has an asset value, and the information we hold is an asset not just for us but for our clients."

The company's technology initiatives also include increased use of robotics, which reduces labor and allows people to concentrate instead on the complexities of logistics operations. "We are a focused player, helping tackle the challenging issues of logistics," Brajkovich says. "We have always been that way."

"The key is information," adds Cox. He notes the company's relatively small size enables it to scale up and back as need dictates.

"Polaris has stayed ahead by understanding the economics," says Brajkovich, and both he and Cox have a positive outlook on the future of U.S.-Canada trade.

"The relationship will remain strong," Brajkovich says, adding that trade tariffs and overall economic pressures will not damage the relationship long-term.