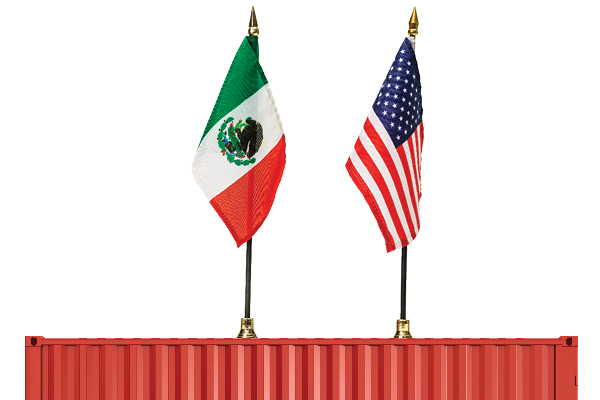 Each year, billions of dollars of goods flow between Mexico and the United States. Trade between the countries shows no signs of slowing, but will recent events alter the flow?

Mexican President Andrés Manuel López Obrador's decision in late 2018 to cancel further construction of the international airport in Mexico City, which had been about one-third complete, carries a price tag of about $5 billion, according to estimates.

The cancellation also adds to the bottlenecks cargo and passenger planes experienced flying into and out of Mexico. The cancellation is "one of the biggest challenges for our industry," said Alexandre de Juniac, director general and chief executive officer of the International Air Transport Association (IATA).

López Obrador had said he supports an alternative plan that includes upgrading the existing airport, as well as a smaller hub in the city of Toluca, west of Mexico City.

Moreover, truck and rail handle the majority of trade between the two countries, says Erik Lee, executive director with the North American Research Partnership, a think tank. As a result, trading partners may not immediately feel the impact of the cancellation.

What is more immediate and significant is the confusion

the decision wrought. "There is a good amount of uncertainty regarding how the new government will impact certain sectors of the economy," Lee says.

For 2018, those numbers were on pace to increase about 10 percent. Mexico was America's third-largest trading partner in 2017 and appeared likely to hold that spot in 2018.

"Many supply chains extend up the I-35 corridor," Lee says, referring to Interstate 35, which extends from Laredo, Texas, on the Mexican border, and travels about 1,600 miles north to Duluth, Minnesota, near the U.S.-Canadian border. Many organizations that work across the U.S.-Mexico border use just-in-time inventory arrangements that are "robust, but delicate," Lee says.

Several other events may also impact trade between the United States and Mexico. One is the recently negotiated USMCA, sometimes referred to as NAFTA 2.0, although it awaits Canada, Mexico, and U.S. ratification. Another is the work underway at many Mexican ports. Even events happening largely in other parts of the world, such as the unsettled relationship between the United States and China, can impact U.S.-Mexico trade.

Trade between the two countries actually predates the North American Free Trade Agreement (NAFTA), which took effect in 1994. Starting in the 1960s, many U.S.-based companies shipped components to Mexico, where they were assembled, perhaps in a maquiladora, or a foreign-owned factory in Mexico, at which lower-paid workers assemble imported parts into products for export, says Mauro Guillen, professor of international management and director of The Lauder Institute, University of Pennsylvania.

In late 2018, the leaders of Canada, Mexico, and the United States announced agreement on a trade deal known as the United States-Mexico-Canada Agreement or USMCA. The agreement still needs approval from the countries' legislative bodies. Assuming it's ratified, it will sunset in 16 years, unless it's renewed.

The USMCA is "more a tweak than a radical revamping of the current agreement," says Jonas Gamso, assistant professor with Thunderbird School of Global Management at Arizona State University. It strengthens labor and environmental standards and extends intellectual property protections. It also includes new provisions related to digital trade, which weren't on anybody's radar when NAFTA was negotiated.

Other updates within the USMCA include "simplified processes for the clearance of goods, especially for low-value shipments, and allowing importers to self-file customs entries, as opposed to requiring the use of a customs broker," says Julio Barrionuevo, senior vice president of operations, Mexico, Caribbean, and Central America with FedEx Express. In addition, new rules for cross-border data flows will help streamline e-commerce.

The USMCA includes new rules of origin and wage rules for the auto industry. A higher percentage of automobile components must be produced in Canada, Mexico, or the United States—what's known as regional content value, or RCV—to be tradeable at a tariff-free rate within the three countries. In general, the percentage now is 75 percent to NAFTA's 62.5 percent.

Additionally, workers earning at least $16 per hour must account for at least 30 percent of the work on a car for it to trade tariff-free within USMCA countries. "It's a gift to U.S. labor unions," Guillen says.

Companies likely will comply with the provision by reserving more of their more sophisticated jobs for the United States and Canada, as wages already are higher in the two countries.

The change is unlikely to boost wages in Mexico. Instead, higher Mexican wages typically require companies to establish capital-intensive operations within the country. "To run them, they need highly skilled, local workers who they pay well," Guillen says

In a shift from NAFTA, USMCA will not establish a certificate of origin format that exporters, traders, and importers fill out before their goods can benefit from preferential tariffs, says Emilio Arteaga Vázquez, an associate with Vázquez, Tercero & Zepedo, a specialized trade law firm.

Instead, under USMCA, companies may certify the origin of a product on, for instance, an invoice. Customs authorities can still test to verify the origination, however.

This is the model being used in many new free trade agreements. "Rules such as these will facilitate trade between companies," Vázquez says. One reason is that the countries agreed that they won't reject a certification of origin due to minor errors or discrepancies.

All companies, but particularly manufacturers, should review the USMCA and identify whether the rules of origin applicable to their goods were modified, Vazquez recommends. If the rules were modified, companies may need to seek new suppliers,reshore production of inputs, or prepare to pay a Most Favored Nation (MFN) duty.

Another shift concerns a mechanism within NAFTA that allows investors to bring governments to international arbitration if they introduce laws that could reduce companies' profits. The USMCA largely eliminates that process and moves dispute settlement to the domestic legal systems.

The lack of tribunals increases unpredictability, as governments have freer rein to do what they want and local courts will decide what's acceptable. "This could mean less investment among the three countries," Gamso says.

Impact on Trade and Investment

This change, as well as the sunset clause contained within the USMCA, "is likely to foster some uncertainty in the eyes of foreign investors," Gamso says. That may slow foreign investment in Mexico, which will, in turn, mean fewer Mexican-produced goods heading to the United States.

On the other hand, much of the trade between Mexico and the United States, including most agriculture and intellectual property, falls under the rules of the World Trade Organization, rather than NAFTA, says Marc Busch, professor of international business diplomacy, government, and business administration at Georgetown University.

"The WTO provides a fundamental backdrop for a rules-based global economy," he says. Businesses benefit from the level playing field it provides.

In contrast, the current U.S. administration tends to adopt a bilateral approach to trade agreements and negotiate with one country at a time, Guillen says. While this may allow the United States to try to get the best possible deal with each country, it also makes the business world overall "more complicated and unequal," he adds.

Of course, any potential changes assume the USMCA is ratified. "It's anyone's guess how it will turn out," Lee says. In the United States, the new Democrats in Congress may vote against it to make a statement against President Trump. However, if their constituents believe the new deal helps them, they may pressure their representatives to support it.

Events that appear only tangentially related to U.S.-Mexican trade can impact it. One is the wage pressure on Mexico from other countries. After all, Mexico's labor force competes with China and other lower-wage countries.

"Whatever happens in China also impacts U.S.-Mexico trade," Guillen says. When making goods for the U.S. market, Mexico tends to benefit as wages rise in China, as its own wages become relatively less expensive, while it also enjoys the benefit of shorter transportation times.

At the same time, rising Mexican wages can offset this advantage. Between 2014 and 2018, average daily wages in Mexico increased about 19 percent, according to Trading Economics.

"A surprise provision in the USMCA, Article 32.10, requires any USMCA nation to notify the other two members three months before launching free trade talks with a non-market economy," Gamso writes in an article for Thunderbird.

The other countries can review any agreement before it's signed, terminate the trilateral agreement, and strike a deal between themselves. In effect, they can kick out any countries wanting to forge trade agreements with non-market countries.While Article 32.10 doesn't specifically name China, analysts believe the Trump administration is targeting China through this provision, Gamso writes.

Even as the Mexican government's decision to cancel the remaining construction work at the Mexico City airport has generated confusion, projects underway at the country's ports should benefit many shippers.

In 2012, the administration of then Mexican President Enrique Peña Nieto set out to double port cargo volumes by 2018, from 260 million tons to more than 520 million tons, according to export.gov, a U.S. Department of Commerce service.

Among the projects is a $1.6-billion investment to construct five new terminals and a cargo processing and logistics zone at the Port of Veracruz. This would quadruple its installed capacity to more than 90 million tons by 2030.

At the Port of Manzanillo, the second-largest port in Mexico, projects underway will provide more than 44 million tons of installed capacity. The development of a new industrial zone with additional rail capacity next to the port could make the port more attractive to shippers looking to move goods north into the United States and Canada, according to export.gov.

Mexico appears on track to meet its expansion goals. Cargo mobilization in its ports has reached 470 million tons, or close to the 520 million goal, export.gov reported. Expansion of Mexico's maritime port capacity "will absolutely have a positive supply chain impact in Mexico," Lee says.

Moreover, despite the changes occurring and the uncertainty that results, it will be difficult to "march back" the tightly connected trade links and supply chains that span the two countries, says Morris Cohen, a professor at the Wharton School at the University of Pennsylvania. The problems facing companies operating across the U.S.-Mexico border are complicated, but "industries solve and re-solve problems as their constraints change."

In August 2016, the U.S. Customs and Border Protection (CBP) and Ricardo Treveno, administrator general of Mexico Customs, announced the pilot of a Unified Cargo Processing Program at the Mariposa Port of Entry in Nogales, Arizona.

Under the pilot, CBP and Mexico's Tax Administration Service conduct joint, rather than separate, cargo clearance examinations to reduce wait times and costs.

By September 2017, the program had been implemented at five locations, with plans to expand. "The agencies work side by side to conduct one inspection, versus two," Lee says. In Nogales, wait times dropped from several hours to less than one hour.

Related Articles
5 Steps to Reduce Supply Chain Risks When Going GlobalGlobal Logistics—November 2016Cross-Border Trade is On a RollHow Secure Is Your Air and Ocean Cargo?The Keys to Dangerous Goods/Hazmat Shipping ComplianceTurn to Technology to Attract the Next Generation of WorkersTransparency to Efficiency: How IoT Can Increase the Productivity of Your Transportation (Sponsored)5 Hacks for Recruiting in Supply Chain ManagementAdding Value to Your Supply ChainCarrier Network Plants Seeds of Delivery Efficiency More related articles...