Warehouse Automation: The Rise of the Robots 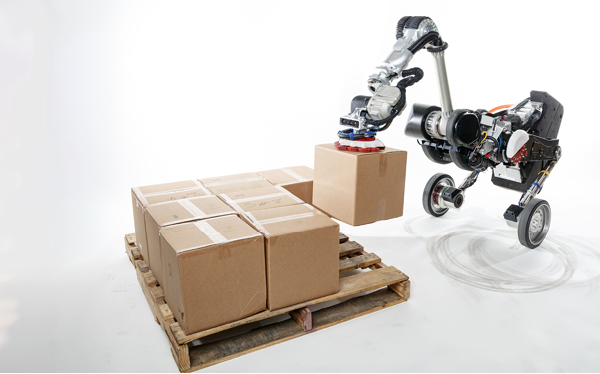 Once the stuff of science fiction, today's mobile robots empower companies to act more flexibly and nimbly. Here are some examples from right here on earth.

GE Appliances, a Haier company, has added about 2,000 new employees across nine U.S. manufacturing plants during the past several years and has invested more than $700 million in technology to build out its supply chain.

Several objectives drove these investments. One was to replace forklifts that operate near people with tools that would enhance safety and allow greater flexibility. Another was to minimize the "three Ds"—dirty, dull, or difficult jobs. Finally, automation provides a more precise understanding of where products are located across the supply chain.

GE Appliances uses the automated tractors in numerous ways, including moving parts from within the facilities to assembly or paint lines, and transporting finished goods, such as cook tops, to shipping docks. The company is also starting to use the vehicles to feed products into the picking area and to move picked parts to shipping docks.

"The autonomous mobile robots (AMRs) have been a game-changer," Chase says. Along with boosting throughput and quality on the assembly lines, GE Appliances uses them to automate material flow. "We're trying to push the boundaries of the technology," he adds.

GE Appliances isn't alone. The market for automated guided vehicles (AGVs) and AMRs will grow by about 35% annually and reach $13.2 billion by 2026, predicts ResearchAndMarkets (see sidebar).

"The past year reduced resistance to robotics and automation, both of which can help build supply chain agility," notes Barb Renner, vice chair and U.S. consumer products leader with Deloitte.

As consumers demand more choices, lower prices, and faster deliveries—and can shift their spending habits with a mouse click—it has become clear that businesses "can't solve problems the way they solved similar issues in the past," says Jeff Christensen, vice president, product, with Seegrid. They need to transform their logistics operations "to find the magic path," he adds, where they can be cost-effective, flexible, and resilient.

The relatively modest investment required to implement robotics—many providers will lease robots for several years—tends to fit most contracts between third-party logistics (3PL) providers and their clients, says Joe Couto, CEO of Körber Supply Chain Software for Latin America, Asia-Pacific, and Africa. Leasing the equipment also allows companies to scale up or down as needed.

Here are some real-world examples of companies experiencing the benefits of deploying robotics and other types of automation.

National Logistics Services (NLS) works with many brands that saw e-commerce sales spike during the pandemic, says Gordon Brown, director of engineering and process innovation with the Canadian logistics provider for fashion, footwear, activewear, and general merchandise companies. NLS operates 12 facilities in the Toronto area, as well as a Vancouver location.

To support its clients, NLS implemented 27 full-time robots, named Chuck, along with 15 seasonal Chucks from 6 River Systems. "We're looking for common-sense automation that works for the most part within our existing infrastructure," Brown says. The Chucks fit the bill.

Chuck automates the picking of "eaches" for e-commerce orders and in doing so, accelerates the pace of work. While the act of picking a product from a shelf and placing it in a package remains generally the same, Chuck reduces the time between picks.

Rather than a picker taking items to the processing areas, Chuck handles this task. And Chuck, rather than employees, moves the carts, reducing walking time and further boosting productivity.

The artificial intelligence within the Chucks also boosts efficiency. Each Chuck knows the layout of the facility and can identify optimal picking and packing sequences. NLS can also easily move Chucks between its sites as needed.

When 6 River initially indicated NLS might see 50% to 75% increases in picking productivity upon implementing the robots, Gordon says he was skeptical. No more. "We saw those numbers," he says.

Several years ago, The Gold Bond Group, an Israel-based logistics provider, decided to make e-commerce logistics core to its mission. The move was a way to differentiate itself from its competitors, many of whom focused on pallet logistics for factories and retail stores, says Yotam Ben Ari, manager of the e-commerce initiative.

With Ben Ari's software background, he recognized the importance of software to automation. He notes that while many companies can create robots to move goods from one point to another, fewer can develop algorithms that enable the robots to work intelligently with other systems, such as a warehouse management system, as well as with people.

Ben Ari worked with Grey Orange, which uses artificial intelligence to drive its Ranger series of intelligent robots. In the first phase of the implementation, which occurred during lockdowns resulting from the pandemic, The Gold Bond Group tested the technology with a client whose logistics needs largely focused on palleted materials. It was a way to assess the solution in a less complicated environment than the single picking that characterizes e-commerce.

After the technology proved itself, Ben Ari and his team installed half the robots and pick/pack stations that would eventually be installed. They again tested the solution with one client.

In late 2020, The Gold Bond Group brought on board the remaining robots and pick-pack stations. The benefits were apparent right away. "Some days, we delivered thousands of packages with multiple SKUs and close-to-zero picking mistakes," Ben Ari says.

Now, The Gold Bond group plans to use the technology to help achieve its goal of same-day delivery for many of its customers. "That provides further competitive advantages," Ben Ari says.

Quiet 3PF provides inventory solutions for digital and omnichannel brands. As many retailers shifted to e-commerce, demand for additional capacity soared, while wages shot up and labor availability shrunk.

Quiet identified order picking and inbound replenishment as functions where it could drive efficiency and capacity improvements. Lemerise and his colleagues considered several solutions, such as goods-to-person systems, but were dissuaded by the high investment and limited warehouse functionality and scalability.

Instead, they deployed autonomous mobile robots from Locus Robotics (formerly part of Quiet; it was spun off in 2015) and 6 River Systems. The AMRs, which use a virtual map to autonomously navigate, "are able to deploy in our existing infrastructure quickly with great efficiency," Lemerise says. The logic in advance order pick sequencing embedded within the solutions has more than doubled productivity, he adds.

The rapid learning curve was also a draw. Typically within two weeks of deployment, employees achieve about 95% of the department average productivity. "That's critical during promotional periods when seasonal employees are needed for a short time," Lemerise says.

The boost in productivity means former pickers can shift to providing value-added services, such as wrapping orders in tissue paper or handling custom monogramming and embroidery. "Since implementation, productivity has improved, employee turnover has been reduced, accuracy remains high, and our capacity has increased," Lemerise says.

While implementations of robotics and other automating technologies have become more numerous, a few misperceptions remain. One is the idea that "robotics are still not ready for prime time," Christensen says.

The growing number of successful implementations, however, demonstrates that robots aren't confined to laboratory experiments, but are on the job today.

Some assume that bringing in robots inevitably means removing racking or other infrastructure and cutting staff, Couto says. Often, however, robots can work with a company's existing layout and employees can be redeployed.

And even though warehouse robots are often best known for their picking ability, they can handle a range of functions—including returns, replenishment, and sorting.

"Robots in warehouses can be used wall to wall," says Fergal Glynn, vice president of marketing with 6 River Systems.

When deploying robotic solutions, a few steps are essential. One is identifying the right system for your needs. "It's not one robot fits all," Couto says. Different challenges can call for different robots.

Rather than focus on perfection from day one, "companies should identify workflows and design to automate them with the goal of continuous improvement," Christensen says. The technology vendor should enable this, while also ensuring reliability.

Effective solutions should allow for do-it-yourself changes where reasonable. Say a company needs to change the material flow on the third shift. If doing so requires a call to the vendor to reprogram the robots, an employee may be dissuaded from making the change, Christensen notes.

To truly test a solution, it needs to be placed into operation, with mock data deployed as needed. It can't be tested if it's relegated to a back corner and remains apart from the primary workflow.

"You have to put it into operation, run it, see how it works, and tweak it as necessary," says Jeff Cashman, chief operating officer with Grey Orange.

Communication is also key. Those leading the charge can't effectively direct the initiative from their offices.

"My engineers talk to the operators and understand their needs," says Chase of GE Appliances. At the same time, they can answer operator questions about the new equipment.

To facilitate user adoption, Chase and his team emphasized the ways in which the tractors are tools for workers, and not the other way around.

Some workers even attach smart watches to the tractors, which allows the tractors to send alerts, such as "I'll be at the picking station in three minutes."

The growing interest in robotics and other automation technology notwithstanding, it's "still early innings," Cashman says.

holding on to tradition

And even as robotics deployments appear poised to continue their growth, opportunities for more traditional systems will likely remain, although they'll probably be less numerous than in the past.

Traditional systems make the most sense when operations are very linear. "But this business is less and less linear," Cashman notes.

The rapid and profound changes in the ways in which business is conducted are helping to drive robotics and automation. Both allow companies to act cost-effectively, and operate more flexibly and nimbly—all key to success in a rapidly changing world.

Along with robotics, advances in other technology solutions help companies and 3PLs automate.

One example is Plexus, a global manufacturing and engineering services provider. Its manufacturing process requires managing high volumes of goods and assets—such as work-in-process and trolleys—with great attention to detail.

Plexus tried several approaches to reduce the sorting, tracking, and misplacement of goods, including the 5S workplace organization methodology. It also employed a barcoding system for data collection and manual logs for physical tracking.

"But these methods are all manual and require multiple touch points before data can be used effectively," says John Rau, customer director with the Neenah, Wisconsin-based company. In addition, data typically isn't available online in real time.

To accomplish this, RAIN RFID tags with Impinj chips are attached to each item. Impinj gateways and readers track the items throughout the production area. Plexus developed an application that delivers this data in real time to the shop floor.

"Once online, it was amazing how swiftly we were able to reduce unnecessary movement of stock, driving increased warehouse operation productivity," Rau says.

Among the benefits Plexus has seen are complete accuracy of customer shipments and a 97% reduction in time spent searching for products.

Automated Guided Vehicles (AGVs): Movement is highly structured and monolithic in static environments with the help of magnetic strips or wires. Any obstacle in the path has to be removed to set the AGV in motion again. Redeployment of guided technology like magnetic strips or wires is required, with an additional cost if the facility changes through a renovation, upgrade, or shift in location.

Autonomous Mobile Robots (AMRs): Work in dynamic environments with autonomous navigation. AMRs create and save the locations or map of the facility to find the alternative path if there is an obstacle in the defined route. They also require minimum resets if there is any change related to the facility, as AMRs can be unboxed and put to work within one hour if they are already mapped with the facility. AMRs are extremely flexible to deploy.