A Fresh Look at Intermodal 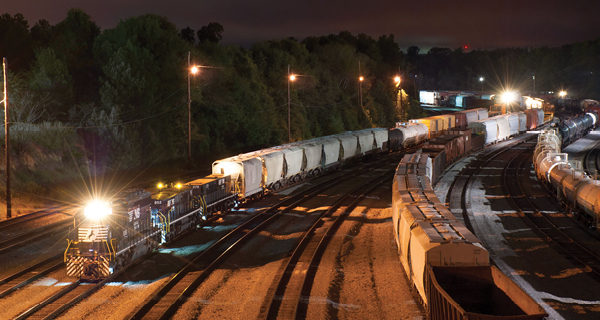 With driver shortage and capacity issues affecting trucking, once wary shippers are taking a different view of rail intermodal.

When Steve Sashihara, co-founder and CEO of IT and management consulting firm Princeton Consultants, recalls the climate for intermodal shipping in 2009, he chuckles because "it was just so terrible."

"There was a lot of capacity on the road and many shippers left intermodal for trucking because the carriers were almost giving service away just to keep their business going," Sashihara says.

Trucking's current lack of capacity has provided a boost for intermodal shipping, agrees Todd Tranausky, senior transportation analyst for FTR, which provides freight forecasting and analysis. In contrast to trucking, intermodal "will at least guarantee you'll be able to move your product to market," he says.

"Intermodal rail provides plenty of capacity," Tranausky says. "The same can't be said for trucking. It could be very difficult for shippers to move a box via truck right now."

For rail carriers to take advantage of the prevailing favorable intermodal conditions, they need to make the necessary adjustments to provide steady service in the face of unexpected volume increases that could strain resources, notes Tranausky.

Intermodal is also vulnerable to weather-related delays; for instance, severe weather in western Canada in winter 2018 led to delays and congestion at ports in Prince Rupert and Vancouver for shipments to distribution centers in areas such as Chicago and Memphis.

"Intermodal is one of the more service-sensitive businesses on the railroads," Tranausky says. "In order to attract and retain new business, the railroads will need to be able to deliver that service."

One possible service issue centers on the availability of intermodal containers. Domestic intermodal container traffic has not grown as much as expected, while container volumes "are significantly higher than you would expect them to be," says Tranausky. Railroads will need to invest in new boxes or risk failing to keep up with new volume coming into the market.

In addition, the trucking capacity issue that is benefiting intermodal also could hamstring it.

"With the trucking sector's overall structural issues, and the growing economy, an important question will be: What does the drayage market look like—is there a drayage capacity constraint on the system?" Tranausky says. "When you think about intermodal, you're not just thinking about the long-haul rail piece. You also have to dray that container at least once, and in some cases at both ends. What will that look like as we get into a changeable, fluid trucking situation?"

A key tailwind for intermodal is that the Class I freight railroads, the largest domestic intermodal carriers in the United States, "are in excellent financial health and are investing capital," Sashihara notes.

The U.S. network is comprised of nearly 140,000 rail miles that are operated and maintained by more than 560 private railroads, which typically own their tracks and locomotives. Railroads spent more than $660 billion on their privately owned networks between 1980 and 2017, according to the Association of American Railroads.

Railroads see stability in intermodal when compared to other core businesses that have been more susceptible to global events and trends—for instance, coal and fracking sand have experienced more volatility, says Sashihara. Currently, 25 percent of U.S. railroad revenue comes from intermodal freight, according to the Intermodal Association of North America.

"Intermodal is not the hot growth story it was 10 years ago," Sashihara says. The railroads " increasingly see intermodal as a rail-friendly segment that can perform over decades versus some of the other substitute commodities that share the same track."

Some shippers may be looking closer at intermodal in the short term because of current trucking conditions, but ultimately intermodal appeals to "long-term thinkers," says Sashihara.

One misconception he encounters among shippers is the idea that a company should be either a truckload shipper or an intermodal shipper. He recommends that shippers employ intermodal in concert with truckload shipping—similar to the way an astute investor develops a diverse financial portfolio to spread risk.

When shippers find the conditions for shipping via truckload particularly challenging—such as in the current climate—it helps to have intermodal "as a weapon in your arsenal," Sashihara says.

"When you ship with both intermodal and truckload, you get a more robust network and save money," Sashihara says. "If you ship only with one or the other, the network is less robust and you will pay more."

Trucking rates are about 10 percent higher than one year ago "at a minimum," he says. However, shippers should understand railroads are being "very aggressive" in their approach to pricing, he notes.

"Intermodal is not as inexpensive as it used to be," Tranausky says. "If you were used to using intermodal five years ago, the rate quote you get today will be at a significantly higher price point."

The market has dictated the increase in prices.

"While truckers raised rates, railroads have not sat by and stayed content with their intermodal pricing," Tranausky says. "They're under pressure to make sure they follow truck rates up as much as they possibly can, especially as they face threats from declines of commodity groups, particularly coal. They need to be able to replace that revenue somehow."