A New Day for U.S. Ports 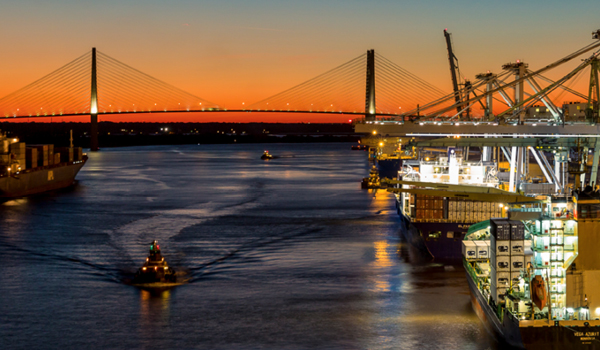 The U.S. port industry is booming. A parade of ports have reported record cargo levels for 2018 and point to promising conditions for continued prosperity based on both overall market conditions and their own strategic positioning.

Many port officials attribute 2018's positive numbers largely to a solid economy. Ports also have likely received a temporary boost in recent months due to pending and current tariffs.

"Many of the record cargo levels ports across the country are experiencing of late have to do with a strong economy resulting in increased demand for goods," says Aaron Ellis, public affairs director for the American Association of Port Authorities. "And more recently, with a rush to beat the implementation deadline of new, protective tariffs."

Uncertainty on the international stage has led to short-term increases in trade for many ports. But the underlying strength of the retail consumer industry remains the key element of recent good fortunes for ports. "Burgeoning consumer confidence is really the biggest player," says Dave Kalata, director, national container accounts for JAXPORT in Jacksonville, Florida.

In light of the surge in cargo levels, officials at some of the country's busiest ports share what is working for their facilities and the trends that are driving the industry.

Some ports thriving in the current marketplace illustrate what's working in the industry as a whole.

The Port of Long Beach finished the 2018 fiscal year having handled more than 8 million twenty-foot equivalent units (TEUs), representing a 10.7 percent increase over the previous year and marking a new port record.

Seventy percent of imports that pass through the port originate in China, and the port's status as a gateway to the Asian market, along with its emphasis on customer service and rail connectivity, is key to its success, notes Mario Cordero, executive director of the Port of Long Beach.

In September 2018, the South Carolina Ports Authority reported 13 percent fiscal year-to-date growth in TEUs handled at the Port of Charleston through August 2018. The port, one of a host of southern ports thriving in the current climate, had the highest monthly container volume in its history in July 2018.

A variety of components contributes to the port's swelling volumes. "The upsizing of vessels on the weekly services calling SC Ports has been a major driver of increased volumes, along with manufacturing (exports) and population (imports) growth," says Kelsi Childress, external affairs coordinator for the South Carolina Ports Authority. "The automotive industry, including import parts, components, tires, and export finished vehicles; export plastics from the Gulf; and agriculture products from the Midwest are areas of particular strength."

Florida ports are embracing the opportunities that come with their proximity to international partners. Trade with Mexico, which showed a 12.2-percent increase in cargo volume in 2017, has been a boon for many southern ports.

"Our advantages are the ease of doing business, lack of congestion, fast turn times, depth of labor, and available industrial space," Kalata says.

Port Everglades in Broward County offers more evidence that Florida ports hold an auspicious place in the current cargo climate. While it is too early to confirm, the port estimates it broke a cargo volume record for the most recent fiscal year. "The signs have been overwhelmingly positive," says Jim Pyburn, director of business development for Port Everglades.

Port Everglades handles 15 percent of all U.S. trade with Latin America and is fifth in the country in handling perishables. The port also offers hassle-free access to a rail line, prompting port officials to use the phrase, "There's only one stoplight between us and Los Angeles."

The port opened an intermodal container transport facility in 2014 and has seen strong growth in that area, particularly in the transport of apparel between Latin America and the South Atlantic.

Capital improvements are essential to growth, and thriving ports point to large-scale projects designed to give them the capacity to build on recent successes and continue to increase cargo volumes.

The South Carolina Ports Authority opened its second inland facility, Inland Port Dillon, in April 2018. The facility, which is located 130 miles from the Port of Charleston's container terminals, is rail-served and supports growth of the port's intermodal cargo volumes.

In addition, work finished on the refurbishment of the port's Wando Welch Terminal wharf in July 2018 enables the facility to handle three neo-Panamax ships at the same time. It also began construction on a project to deepen Charleston Harbor to 52 feet. The Port of Charleston also has a new terminal due for completion in 2021 to accommodate growth in its containerized cargo business.

"SC Ports has a bright future," Childress says. "We expect to continue to grow well above the U.S. port market average and look for increased frequency of big ship calls in our harbor."

At the Port of Long Beach, an investment in capital improvement projects ensures the port can continue to accommodate the large ships critical to the industry. A focus for the port is the Middle Harbor Terminal Redevelopment Project. The new facility, which is expected to be completed in 2020, will be able to handle twice as much cargo as the two terminals it replaces, with a predicted annual capacity of 3.3 million TEUs and space for the largest cargo ships in the world.

"We went through the Great Recession of 2008-2009 with some severe impacts on cargo coming through this port, but our commission stayed the course and invested to prepare for the future," Cordero says. "That course is serving us well now."

Officials at JAXPORT and Port Everglades agree that capital improvements are key to current and future success.

"Florida has shown incredible vision when it comes to port growth and has championed ongoing investment during the past decade, which puts us on the map," Kalata says.

"Sustained marketing of Florida internationally as a beneficial destination for cargo has helped, as has recognition by the state's leadership that ports need significant, sustained infrastructure investment to compete on the national stage," he adds.

A core investment at JAXPORT is the ongoing Jacksonville Harbor Deepening Project, which is supported by state and federal funding. The project eventually will provide international carriers with 47 feet of water for travel.

"We will soon be able to accommodate all the containers that should be coming through Jacksonville," Kalata says. "Our leadership understood many years ago that the port would need to be deeper to take advantage of projected growth in container business."

"We have the capacity, according to our master planners and our own studies, to almost double the volume of container cargo that comes through here on the same footprint," Pyburn says.

Ports in the United States also are taking important steps to adopt new, crucial technological tools that give them fresh capabilities.

"One key strength of the U.S. port industry currently is the wave of supply chain and logistics innovation and adoption, including digitalization of cargo data, which creates resiliency in electrical supplies and telecom networks, and development of new cybersecurity technologies to protect those networks," Ellis says.

The federal government will play a central role in the fortunes of ports in the near future due to trade policy and infrastructure spending. Ports officials express varying degrees of concern about the possible ramifications of new tariffs. Because the Port of Long Beach relies heavily on trade with China, officials there are monitoring the tariffs and their impact warily. The initial impact has been insignificant but could grow, Cordero says.

"I have a serious concern because a trade war can lead to a tax or tariff on consumer goods that represent many products that average Americans buy day to day," he says.

At Port Everglades, officials closely watched negotiations surrounding the revision of NAFTA, particularly as it relates to trade with Mexico—a key trading partner for the port. The resolution of NAFTA in a positive manner through the new USMCA deal will allow the port's trade with Mexico to continue to flourish, particularly with the export and import of new vehicles.

"That appears to be a very solid growth opportunity for us," says Steve Cernak, CEO and port director.

"The biggest hurdle today for U.S. ports is the historic underspending by the federal government on transportation infrastructure maintenance and improvement, especially with regard to freight movement and the road, rail, and waterway links with ports," Ellis says. "What excites us is that this trend toward transportation infrastructure underspending may be changing for the better.

"The advocacy efforts by our association and the rest of the transportation industry, as well as other key players in the logistics chain, are making inroads at the highest levels of government to put more emphasis and priority on the needs of moving freight," he says.

If international trade and investments in infrastructure continue to grow, then the future of America's ports looks promising.

The proximity of distribution centers to ports has become essential to sustained success, especially in light of Amazon-driven changes in customer expectations. Site selection for companies using ports in their supply chain can be crucial.

Southern California's wealth of distribution center space provides an inherent strength for the Port of Long Beach. Supply chain stakeholders know that the infrastructure is in place near the port to make the distribution process relatively straightforward, especially when coupled with rail connectivity.

"One great advantage we have is approximately 1 billion square feet of warehouse facilities in the immediate area," Cordero says. "For a port, that's a huge asset."

JAXPORT has also benefited from distribution centers in the vicinity of the port. "That's what takes us to the next level when it comes to cargo volumes," says Dave Kalata, director, national container accounts for JAXPORT.

"We have seen an incredible increase in retailers—traditional brick-and-mortar shops with online components as well as totally e-commerce concerns," he adds. "Amazon recently opened fulfillment centers in Jacksonville as well."