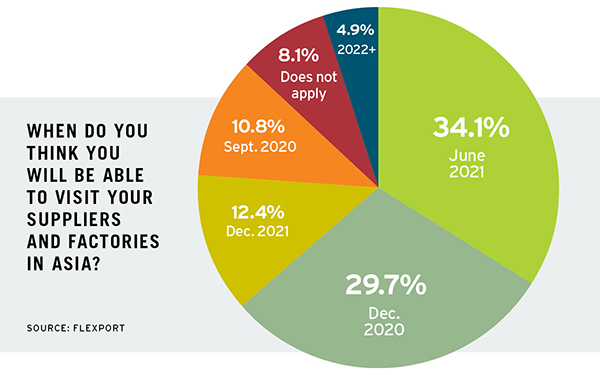 About 43% of businesses say that the majority of their global supply chains are dependent on China, and most say they won't be able to visit those suppliers until June 2021 at the earliest (see chart), according to a study from technology platform Flexport. Asia was the first region to endure COVID-19 and reopen its economies—what does that mean for global supply chains?

China's recovery: China is experiencing a modest recovery. Since March 2020, production and social activities began returning to normal, and more than 90% of Chinese companies and employees are back at work. Total import and export value increased by 1.3% in April 2020 month over month, of which total export value increased by 8.5% month over month. Value-added industrial output increased 3.9% year over year in April.

From Korea to Thailand: The epidemic is under control in this region, and the countries are close to achieving zero new cases due to effective testing, tracing, and isolating. Their economies are reopening, including manufacturing, but travel restrictions are still in place.

From the Philippines to Pakistan: The number of new cases is growing rapidly in this region due to a lack of testing and isolation. These countries suffer from less developed health systems and lower government capacity to enforce lockdowns. Their economies began reopening out of necessity.

China's challenges: Household income fell 4% year over year in the first quarter, and unemployment rose to 6% in April 2020, the second-highest level in China since January 2017. Weak domestic consumption poses another challenge, with retail sales falling 7.5% year over year in April. China is also unclear when the virus will be eliminated—nationwide totals hit double figures for the first time in May 2020.

Freight in Asia: Shanghai Pudong International Airport's cargo terminals are back to normal operations, but many other Asian airlines cut all capacity, including India, Malaysia, and the Philippines. Airfreight now relies on freighters and passenger planes, with capacity tight and rates high. All ports are operational, but many have limited hours and staffing. Long-distance trucking and rail are delayed as rules continue to change.

What the future holds: China is accelerating its digital transformation. The U.S./China trade war will pick up again, and production will continue to shift to Southeast Asia. Supply chains will be much more complex because there is no other country that can take China's place for manufacturing. International travel will not go back to normal; airfreight capacity will remain low, and passenger plane belly capacity won't return soon.