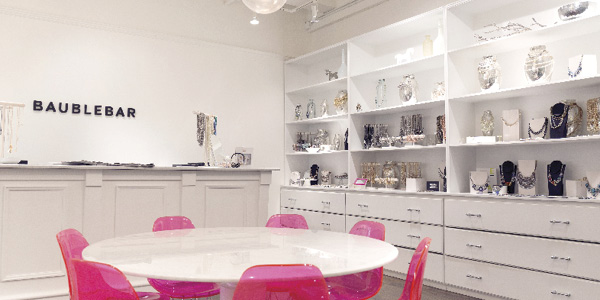 For online jewelry retailer BaubleBar, partnering with DHL to streamline international shipping was a gem of an idea.

When it comes to marketing and selling products on a global scale, the answer seems simple: Sell online. But what about taxes? Customs laws in the destination country? Trade embargoes? Shipping times? When going global, companies can attempt to tackle all these trade compliance issues on their own, or they can enlist help from a specialist.

The global economy represents myriad opportunities for small and mid-sized enterprises, but it can be hard to keep straight the nuances of international business practices. Not all countries are the same, so navigating the global marketplace's import and export laws is more complicated than just dropping off a pile of packages at the courier's door.

Established in 2011, BaubleBar Inc. learned the hard way that not all carriers are created equal in the international realm. Based in New York, N.Y., BaubleBar is an online jewelry retailer. The company's inventory is partly wholesaled jewelry that is resold, but an increasingly large portion of the company's product offering consists of originally designed pieces. BaubleBar has seen exponential growth since its inception, and —especially for an American company—has become popular overseas.

Approximately 10 percent of BaubleBar's orders are placed internationally. Through tracking customers' online shopping carts, BaubleBar found that an international customer's average order is nearly twice that of a domestic customer. Also, when compared with rates for domestic orders, the return rate for international orders is almost nonexistent. The retailer realized that if it wanted to keep those international consumers coming back for more, it had to find a way to reduce international shipping costs and times, and streamline trade compliance.

"International customers buy more and return less," says Dr. Rotimi Akinyemiju, chief operating officer of BaubleBar. "We had to find a way to streamline fulfillment operations and shipping times to maintain and expand that customer base."

BaubleBar previously used its regular domestic carriers to ship its international orders. These carriers mostly offered only delivery-duty unpaid (DDU) options, so BaubleBar wasn't able to give exact details to international customers when they ordered. "That made us less competitive, because the shipping costs were excessive, and the customer didn't always know what the final price would be," says Akinyemiju.

The retailer had used DHL Express in the past for occasional international shipments, so in April 2014, BaubleBar approached the provider about its delivery-duty paid (DDP) option. "Given the relationship we had with DHL through previous jobs, I reached out to them so we could offer DDP services to our customers, and optimize and streamline the fulfillment process for international orders," says Akinyemiju.

Accessory to the Bottom Line

DHL also operates one of the largest logistics networks in the world. The provider's experience, paired with its DDP shipment options, appealed to BaubleBar's bottom line. "The carrier was competitive on pricing in the international market," Akinyemiju says.

In addition, BaubleBar was able to leverage DHL's influence with various governments to speed products to their destination. "The DHL team has access to many resources, and a lot of experience in international customs, so they have been invaluable in making sure we're complying in all aspects of international trade," says Akinyemiju.

"DHL provides two important resources," says Eugene Laney, head of international trade affairs for DHL Express. "One is our global network and access to 220 markets. The way we see it, 40 percent of all e-commerce will come from outside the United States, so there's huge demand in markets such as Germany, China, and Mexico.

"We also see enormous growth in other areas, such as Australia. Having access to those markets has become critical," Laney says. "DHL has operated in many of those countries for 20 years or longer."

The second benefit of using DHL, Laney says, is the provider's ability to deal with regulatory headaches that shippers often experience. "When companies get stuck, we can deal with border and tax issues, or just simple trade compliance problems when shipments get held up," he adds.

This type of service can be critical to streamlining operations, especially for companies that do not have an internal compliance department. "In smaller companies, CEOs do all the heavy lifting. They don't have time to focus on trade compliance, and that's something DHL can bring to the table," Laney says.

"In Latin America, the government holds back close to 30 percent of goods; in Asia, it's only slightly less," he adds. "We are always working to figure out ways to create harmonization in border laws around the world, and develop transparency in the rules and regulations to help shippers make decisions."

Bringing DHL's support into play for international shipments had a substantial impact on BaubleBar's operation. When BaubleBar began operating in 2011, it shipped only a few international orders each week. Since then, international business boomed, and it now ships hundreds of global orders daily. This sales growth has also impacted the company domestically, as increased orders and profits create expansions and more jobs. The increase in international business, combined with continued domestic growth, made it necessary to expand with a new 52,600-foot warehouse in Brooklyn, N.Y.

"We've seen a tremendous increase in the number of international customers, and that segment of our business continues to grow," says Akinyemiju. "That's because we're now competitive on shipping costs, and able to get orders to their destinations with all the duties and taxes prepaid."

With the higher average profit margin on international customers, and with many countries still untapped, BaubleBar is exploring markets in new destinations.

Currently, the retailer ships to ten countries, but expansion is on the horizon. "DHL can provide DDP shipments to 167 countries," says Akinyemiju. "We want to pay duties and taxes in real time. We are currently upgrading our information systems so that we're able to calculate duties and taxes in real time—then we can serve any customer, anywhere in the world where DHL is able to do DDP."

BaubleBar is also exploring the international mobile market. "We see an interest in mobile commerce; one-third of the global population now uses mobile devices to purchase goods," says Laney. With many countries around the world just beginning to adopt mobile technology for retail, the number of customers who can be reached is constantly expanding.

BaubleBar sees the value in finding new ways to reach consumers, and intends to be a forerunner in reaching international mobile consumers. "We need to acknowledge the many growth opportunities for U.S. companies overseas," says Akinyemiju. "With 10 percent of sales coming from outside the United States, we need to do what it takes to find new ways to reach customers, and streamline those sales and experiences."

Shopping with mobile devices is occuring in places that would have seemed unlikely only a few years ago. "In countries that are early adopters of mobile commerce and technology, such as Nigeria, Mexico, and Australia, there's great opportunity to meet the demand of young populations interested in shopping by e-commerce," says Laney.

Laney describes what he calls "the Uber effect"—when customers demand that what they buy today arrives quickly and on time. "This demand is changing the way DHL does business, and also changing the way many e-commerce businesses such as BaubleBar look at their customers," Laney says. "In one study, the expectation for an international shipment delivery was two weeks. That's changing globally, as consumers want their purchases on demand."

BaubleBar and DHL Express continue to work together to get goods to market faster. And with a product as universal as jewelry, it isn't likely that BaubleBar will hit a limit to the new markets it can appeal to anytime soon. With DHL onboard to streamline trade compliance and speed purchases to consumers, the partnership will continue to shine.

Related Articles
Walmart’s ShippingPass Has Ended. What Retailers Should Do Next.Optimizing Inbound for Improved E-Commerce FulfillmentAzteca Foods Craves Inventory Management System CPG Market Demanding More Flexible Logistics SolutionsChanneling the Brick and Click DilemmaGrowing Efficiency and Weeding Out WasteRetail Collaboration: It’s All in the JeansInventory Replenishment: Why Push When You Can Pull?Awake at the Wheel: Delivering Customer SatisfactionTrends—April 2015 More related articles...