Integration: Call of the X-duty 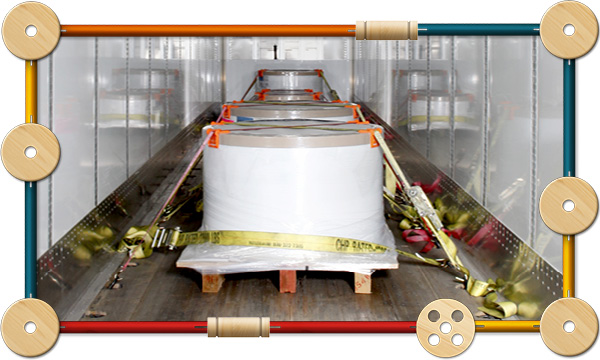 The X-duty trailer may look like traditional dry van equipment, but on the inside it's a different story. Outside-the-box thinking allowed appliance maker Electrolux to connect its inbound and outbound shipment needs in one innovative transport solution.

When Nussbaum Trucking approached trailer manufacturer Wabash National with a straightforward yet speculatively wild question, it sparked a revolution in trailer innovation.

The revolution began in 2009, when Nussbaum was running a dedicated flatbed operation out of Webster City, Iowa, for Swedish appliance maker Electrolux.

With flatbed rates swinging as much as 30 to 40 percent depending on demand, Electrolux wanted consistent inbound raw materials costs year-round. Ideally, it would unload inbound flatbed trucks and repurpose those assets for outbound hauls. But this approach was unrealistic given the oversized and unwieldy nature of the raw steel coils Electrolux was moving into the facility, the flatbed equipment necessary to transport them, and the finished appliances moving out, which required dry van trailers.

"Capacity that we couldn't use was leaving the plant," says Chad Spangler, director of inbound transportation for Charlotte, N.C.-based Electrolux USA.

Electrolux and Nussbaum wanted a trailer that could tie together two transport types, moving strapped-down raw steel inbound from suppliers, then cubing out finished-good appliances bound for distributors. While Wabash had tinkered with heavy-duty equipment before, it had never considered a box with a floor rating 50 percent higher than existing equipment.

"You can't haul steel coils in a conventional van trailer," says Ehrlich. "So we considered how to create a trailer that could."

Nussbaum and Electrolux then discussed the feasibility, practicality, and potential cost of developing the equipment.

"All Nussbaum wanted from us was buy-in that we'd use it," says Spangler. "The trucking company assumed the risk and ran with the idea."

With Electrolux demonstrating a need and Nussbaum proposing an idea, Wabash became the solution integrator. Ehrlich and his team of engineers approached the problem by running through a series of causes and effects.

"Trailers and floor systems are like links in a chain, with different parts supporting one another," he says. "I considered the different design components, their impact on each other, and potential problems."

What Nussbaum and Wabash contrived to do bent convention. A standard trailer floor system today supports 16,000 pounds, with high-end, heavy-duty trailers topping out at 24,000 pounds. Ehrlich determined that the trailer Electrolux needed would require a 35,000-pound floor rating—an increase of more than 50 percent over a standard heavy-duty unit.

Wabash calculated its options, then its development costs. "Nussbaum wasn't going to place an order for trailers that might not work—nor were we willing to invest in the development if we knew there wasn't a light at the end of the tunnel," Ehrlich recalls. "But I was confident we could pull it off, and told Nussbaum that if we didn't, they were under no obligation to buy."

Once they reached consensus that creating the trailer was possible, Wabash began working in conjunction with Nussbaum, Electrolux, and the appliance maker's engineering staff.

"Not only were our corporate representatives involved in the process, but also the St. Cloud warehouse supervisors and materials managers who physically unload the trailers," says Ehrlich. "Nussbaum also met with some of our steel suppliers to gather their input."

Given the effort's scope and the importance of safety, Wabash wanted complete backing from all parties involved.

"We brought Electrolux representatives in at the beginning of development and demonstrated how we were engineering the trailer to prove it was safe," says Ehrlich.

Once Wabash diligently worked through its development process and produced a prototype X-duty trailer—as it has come to be known—the next phase introduced comprehensive testing to ensure the equipment's safety. Because the trailer was unlike anything it had ever manufactured or certified, the company had to re-engineer its own test apparatus and expectations.

"We wanted to certify the equipment's safety with a floor-system rating, but the X-duty trailer was completely off the charts," Ehrlich explains. "So we created our own standards for it."

The steel coils, which weigh up to 16,000 pounds each, must be loaded in specific spots within the trailer. The X-duty presents a different loading and unloading environment than a typical flatbed trailer, using a 20,000-pound capacity forklift, for example, rather than overhead cranes. Specifications had to be uniform to ensure the trailer wasn't overloaded in the front or rear.

After "hitting a home run at first bat" with the prototype, as Ehrlich describes it, Wabash conducted three months of testing to ensure the trailer could withstand various loading conditions. The manufacturer brought a model into Electrolux's St. Cloud plant to demonstrate how it would work and solicit feedback. Along the way it made further modifications.

With the X-duty trailer perfected, the next step was inventing an internal system for securing the steel coils with restraints, as well as storing the rigging when not in use.

On a typical flatbed, a box under the trailer or on a rack holds straps and chains. Working with a third-party company, Nussbaum devised a case that fit into a hole in the trailer's nose. Rigging is housed on the outside, accessible from the interior, and Electrolux doesn't lose cube when loading finished goods for outbound transport.

Putting it in Practice

After one year in development, Nussbaum and Electrolux put the X-duty trailer into action in 2010. Now there are 25 units in constant rotation between two suppliers, the manufacturer's St. Cloud plant, a distribution center (DC), and some customers that are in close proximity to the DC. Twelve drivers serve the dedicated loop.

Nussbaum's drivers generally pick up seven or eight loads of steel coils from vendors each day. Once inbound materials are unloaded at the manufacturing facility, trailers are then positioned for outbound finished goods deliveries.

The X-duty trailers have been a hit with Electrolux's staff. "Our loaders love the fact that they don't have to worry about rusted steel, and that they aren't out in harsh weather," says Spangler. "They work in a controlled environment."

When a truck comes into the St. Cloud plant, Electrolux has drop trailers built into the loop. Its outbound transportation managers have visibility to inbound deliveries through its transportation management system. Trailers are pre-loaded, so when drivers pull up to the dock and unhook an inbound shipment of steel, they can immediately hitch up to a trailer laden with finished goods and move on.

"Electrolux can load an X-duty trailer in half the time required to load a conventional trailer."—Brent Nussbaum, CEO, Nussbaum Trucking

In addition to eliminating one-way flatbed moves, which takes deadheads out of the market and more effectively uses existing capacity, and creating continuous moves, Electrolux developed a more efficient loading and unloading process.

Previously, suppliers loaded steel coils onto a flatbed, generally using overhead cranes. Then freight had to be strapped down, and often covered with tarps for transport, adding another manual labor element. With the X-duty trailer, however, loaders on forklifts can go directly into trailers to set coils down and pull them out.

"Loading traditional flatbeds, and pulling trailers into facilities to crane-load them, wasted time," says Nussbaum. "Electrolux can load an X-duty trailer in half the time required to load a conventional trailer."

Electrolux suppliers have a favorable opinion of the new trailer as well. "The steel company that we worked with initially on the X-duty was excited, and quickly bought into the idea because workers could load product faster," explains Spangler.

Both Nussbaum and Electrolux have big plans for the X-duty trailer. One heavy-machinery manufacturer has already expressed interest to Nussbaum in using the trailer for hauling raw materials and oversized equipment in an enclosed space.

Electrolux is similarly exploring opportunities to expand its use of the X-duty trailer. But there are measured constraints.

"Some facilities don't have the docks to unload this type of trailer, or docks are located in the wrong part of the building," explains Spangler. "That is a limiting factor. Based on where the manufacturing is and where the steel comes from, there may not be enough volume to justify a round trip. The X-duty trailer is moving all the time, so ideally it would be loaded going back."

The manufacturer is considering where it can incorporate this dedicated system within its transportation network—perhaps even siting and designing facilities and aligning its distribution network with the X-duty in mind.

Electrolux's Spangler also has to confront what can only be described as a welcome problem: enthusiasm for the X-duty from some very excited inbound logisticians.

"Our materials group is receiving undamaged steel in a controlled environment—and they want that all the time, as many trailers as they can get," he says. "But we have to consider the X-duty objectively, understanding that while it is well-suited to some situations, it doesn't work in others."

Moving forward, however, odds are Electrolux's materials group will get more of what they want.

Rolling Out a Safer Ride for Paper Stock

The X-duty trailer is a practical innovation with applications beyond moving steel coils and appliances. Trailer manufacturer Wabash National had the future in mind when it embraced Nussbaum Trucking's idea for a heavy-duty flatbed/dry-van hybrid trailer and decided to run with it.

"We recognized we could target different industries with this type of product," says Rod Ehrlich, chief technology officer, Wabash National. "It was a good investment, and not just amortized through Nussbaum's use."

The trailer manufacturer is considering high-density cargo where it can capitalize on its investment. Paper manufacturing is one such industry, largely because there have been a number of well-publicized mishaps in which shippers tried to move product on unsuitable equipment.

"Van trailers typically transport paper rolls vertically, and they're not secured very well," says Ehrlich. "If a paper roll falls over because it hasn't been properly secured, it takes the trailer with it. When stock is wider than the trailer is tall, you can't haul it."

Laying a paper roll lengthwise, with the eye horizontal, however, lowers its center of gravity. Wabash discovered through experimentation that the X-duty's floor system is suitable for this application.

Paper stock that has historically been shipped by rail can now move over the road with the X-duty trailer system. In addition, high-density, heavy equipment such as machining tools can also benefit from this type of hybrid equipment.

"The beauty of shipments in a van trailer is securement, damage reduction, and cost savings," Ehrlich says. "Flatbeds only go one way."

Related Articles
Own the Transportation Conversation: Debunking Common Truckload MythsTwo Generations with a Drive to Serve, Grow and InnovateTrucking Influencers Take Over5 Ways to Improve and Optimize Driver RetentionPowerful Ways Employee Ownership Can Impact Your BusinessWhat's the first thing you would do to address the truck driver shortage?Trucking Strategies to Keep Your Freight Moving2021 Trucking Perspectives2021 Top 100 TruckersTrucking Transformation More related articles...