Cargo Security: The Art of the Steal 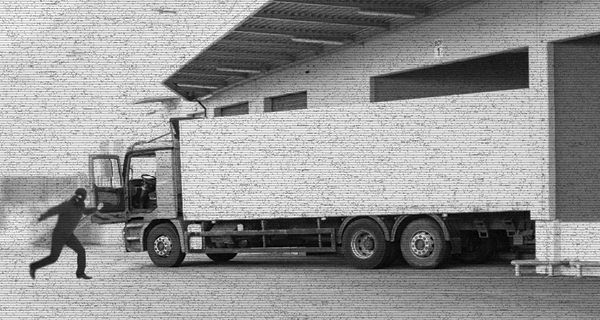 Keeping your cargo safe from theft is a bigger challenge than you might think. Follow these steps to reduce the risks that make your company a target.

Shippers also stand to lose by making thefts public. "A theft will hit the media immediately," says Erik Hoffer, president with CGM Security Solutions, Punta Gorda, Florida. The stock may take a beating, as investors know the company likely is out the potential revenue the products would have generated.

Rather than risk negative publicity, companies often accept a small percentage of shrinkage. "They eat their loss, and leave," Hoffer says.

To be sure, letting incidents of theft go unreported can exact human and financial costs. Stolen food and medicine that's not properly stored can inflict real harm if used by unsuspecting consumers. Terrorists can introduce bioweapons into cargo obtained by theft. "Companies need to report theft," says Keith Lewis, vice president of operations with CargoNet, a provider of cargo theft solutions in Jersey City, New Jersey.

Moreover, under-reporting these crimes leaves shippers, carriers, regulators, and law enforcement with a poor understanding of the scope of the problem, as well as the tactics criminals use. "It's difficult to get legislators to buy into the idea that cargo theft is a big problem if the numbers are under-reported," says Chuck Forsaith, director, supply chain security with Purdue Pharma, and chair of the Pharmaceutical Cargo Security Coalition (PCSC). "And, you can't defend what don't know."

Reducing the risk of cargo theft starts with understanding the ways in which most thefts happen. Nearly three-quarters of cargo thefts are of full truckloads, according to the Cargo Theft report. Most thefts occur in parking lots and garages, the FBI reports. Next in line are docks/wharfs and freight terminals.

The top types of stolen cargo are food and drink (17 percent), home and garden products (16 percent), and electronics (13 percent), according to the second quarter Cargo Theft Report from SensiGuard, a provider of global logistics security services.

Why the large numbers of food and beverage cargo thefts? One reason is the sheer volume of products on the move. In addition, most of these products lack serial numbers or other identifying information, says Aaron Henderson, director of loss prevention with Penske Logistics, a third-party logistics provider based in Reading, Pennsylvania.

Traditional cargo thefts—thieves making off with stolen goods—still vastly outnumber online thefts, which occur when an individual or company uses the internet to pretend to be a legitimate carrier, secures a load, and then takes off.

"Some sham truckers create false documents, present them at the warehouse, and drive away with a load," says Rich Kolbusz, special agent in charge at U.S. Customs and Border Protection in Miami/Fort Lauderdale, with DHL Global Forwarding.

While not technically thefts, incidents in which contraband, such as drugs, is introduced into freight also are cause for concern, Hoffer notes.

A disturbing trend is what's sometimes referred to as disruption. Here's how it can occur: A carrier takes a full truckload of freight, and then spends one or more days reorganizing it to cram in yet more freight and make more money. "It puts shippers into a panic because they think they're missing a load or a driver," Lewis says. Before the driver reappears, the shipper up against a production deadline may have to pay to move another load of the same product.

While no cargo is completely immune to the risk of theft, you can reduce your exposure. Here are 10 guidelines:

The actions you take to reduce cargo theft can have an impact. When the PCSC started about 11 years ago, cargo theft within the industry was "significant," Forsaith says. By reviewing incidents, sharing information, and improving security, the number of large-scale thefts plummeted from 47 in 2009 to fewer than 15 in 2016, according to information from the PCSC. The average value of the thefts dropped from $4.2 million to $200,000.

"We got smarter," Forsaith says.

It Takes a Thief

The majority of cargo thefts (74 percent) involved the theft of a full truckload, according to SensiGuard's quarterly report.

Most cargo theft incidents BY STATE 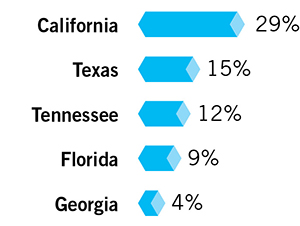 The bright yellow "Bees" produced by Roambee Corporation, an enterprise asset visibility provider based in Santa Clara, California, are the size of a few sticks of butter. But they are more than just cute gadgets. Every Bee contains numerous sensors that monitor the condition and location of the goods it's protecting. One Bee can run up to 90 days, with an hourly ping rate, on a single battery charge. Each has a unique identifier and can be tracked worldwide.

"The bee is a data collection platform," says Vidya Subramanian, vice president of products. The company created the device in response to customers who faced "a big hole in visibility when their products left the manufacturing facility," he says.

One Roambee customer, CEAT Tyres, produces more than 15 million tires each year. Its rubber had been diverted and stolen when traveling from southern India to CEATS plants in the western part of the country. The company tried GPS vehicle tracking, RFID, and other tools, but "none could monitor vehicles hired per trip," says Kunal Arora, senior manager, materials with the India-based company.

In 2013, the company began attaching Roambees to each vehicle. The Bees don't need to rely on the vehicle battery or the operator, and management quickly knows if a shipment is delayed or deviated from its route. The result? CEAT can better manage the movement of rubber, and can track inventory in transit, says A.P. Satesh Kumar, manager of rubber purchasing.

Roambee used its Bees when its own offices were burglarized in May 2017. Along with computer and office equipment, the thieves took 100 Bees.

"Maybe they thought they were phone chargers," Subramanian says. It's also possible the Bees' bright yellow color convinced the thieves the devices were innocuous.

Once company executives discovered the theft, they used the Bees to transmit real-time information on each device's location. They learned that most of the devices were in a storage facility. The Bees led them not just to the facility, but also to the specific unit where the Bees and other stolen goods were stored.

Roambee worked with law enforcement to follow the thieves, gather evidence, and obtain a search warrant. The thieves also had two Bees in their car, broadcasting their location. "It was the best outcome possible: an arrest without incident," Subramanian says. Moreover, the police were able to return items the criminals had stolen from other businesses, including a photo album from World War II.

Roambee customers use Bees in various ways. Some track high-value items, and others monitor their cold chain. Some focus not on the value of the product, but on the loss of productivity if it doesn't reach its destination on time.

For instance, a carton with several hundred dollars of products that doesn't show up on time might create bottlenecks in a production line that churns out millions of dollars of products each week. A Bee can let the company monitor the carton's movement and react immediately to any deviations from its route. "When you peel back the onion, that information can do so much for you," Subramanian says.