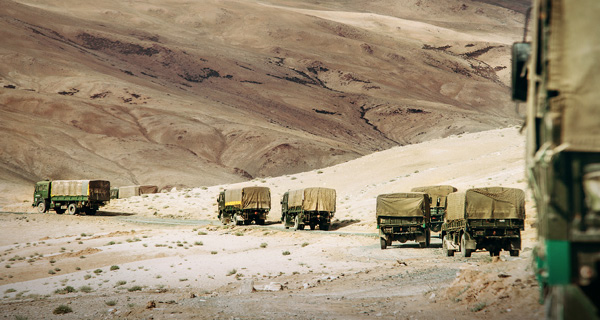 Think you're a project cargo master? If you really want to be all you can be, try moving difficult cargo into an area with terrible infrastructure and hostile combatants, something military logisticians do every day.

Everyone wants to be a POG, until there's POG stuff to be done. That's an old—but accurate—military joke. In the U.S. military, officers and enlisted personnel filling non-combat roles are jokingly referred to as POGs: Persons Other Than Grunts.

Military logisticians—or loggies—may be POGs, but they face constant disruptions and supply chain threats. And these days, being a POG doesn't mean you won't see combat. Keeping installations and troops supplied, especially in hard-to-reach areas, takes intense training and no small amount of grit.

"We routinely ran convoys of fuel tankers from Kuwait north through Baghdad, and to Balad, and even farther north and east into more remote places of Iraq," says Major Bill Barthen, brigade S-4 and logistics officer for the 32nd. "It wasn't that the cargo was too difficult, but our anxiety over our vulnerability to possible attack and how to segregate potential fires kept us on our toes."

Proper training is crucial to successful operations in dangerous areas. Between deployments at home and between missions while overseas, troops train extensively so they know what to do when the worst happens.

"We practiced how to quickly extract vehicle operators and passengers, whether they were conscious or unconscious, from trucks," Barthen says. "We practiced on American contractors and foreign country nationals. The language barriers and various operational states of their equipment made it a unique challenge, which we addressed well.

preparing for the unexpected

"We constantly rehearse expected issues to improve our response time," he adds. "For example, tires pop and vehicles break down. Leaders and maintenance personnel have little time to assess the situation and decide to repair on the spot or recover to a better, often safer area to address the broken equipment. Other soldiers take up defensive positions and secure the area, which often requires communicating with people of a different culture and language, to maintain a situation safe enough to remedy the problem and continue the mission.

"Where we are exposed to small arms fire, improvised explosive devices, or indirect fire from mortars, artillery, or aircraft, those battle drills become critical in maximizing time to save lives, recovering damaged equipment, and protecting the cargo," Barthen says. "Cargo such as fuel and ammunition can make the situation even more difficult."

The government also enlists assistance from contractors such as government services firm KBRwyle, which provides a wide range of supply chain management, transportation, and other professional services to the Department of Defense (DoD). Contractors also train to ensure the safety of their crews.

"Safety is always the priority concern," says Ella Studer, senior vice president for KBRwyle's logistics business. "We have safety processes for any environment or operating condition.

"Screening and vetting of local vendors and subcontractors is critical," she notes. "In Iraq, Iraqi nationals must first obtain a Prime Minister National Operation Center (PMNOC) letter from the Iraqi government to obtain clearance into certain sites. Security experts perform assessments and report their findings, with recommendations to KBRwyle leadership.

"We take appropriate measures to mitigate any security concerns," Studer adds. "Security considerations sometimes include military or contractor-provided escorts and aerial surveillance to ensure the safety of personnel and equipment."

Off the Road Again

Direct threats aside, critical shipments often move through areas with little standing infrastructure. The 32nd recently conducted classroom training where logisticians were asked to overcome obstacles that might obstruct humanitarian aid in a fictional disaster area in the Philippines.

"The scenario mandated we use mine-resistant vehicles, but our ad hoc staff continued to advise our commander—the instructor—that we needed smaller, wheeled vehicles, and even boats to be successful in that environment," says Barthen.

"Conditions such as steep dirt roads that became impassable in the frequent rains made the situation difficult," he adds. "Congestion on narrow roads with two-way traffic, sharp corners, low power lines, and bridges that could not sustain the weight of our loaded vehicles made it challenging to find suitable routes for delivering humanitarian aid to villages damaged by typhoons or suffering food security and potable water issues."

Bad roads, crumbled airstrips, or lack of port access aren't the only problems that can arise. Complications can vary widely in specific areas of the world.

"KBRwyle adapts to each situation with knowledge of the geographical areas and operational conditions," says Studer. "Challenges include obtaining qualified employees to execute each scenario, obtaining equipment durable in the operating environment, and coordinating deliveries with receiving entities that are likely to have competing priorities depending on operational conditions."

Even in the United States, military shipments come with complications. Tanks, helicopters, and other large freight must be moved between military installations, or by highway or rail to ports for shipment overseas. While U.S. infrastructure is arguably better than the average war or disaster area, it isn't always convenient for moving over-sized cargo.

"Three assignments come to mind," says Rob Hooper, CEO of third-party logistics company Atlantic Logistics, which provides specialized hauling services to the DoD. "The first two are movements of Sikorsky SH-60 Seahawks for the U.S. Navy within the state of Florida, on removable gooseneck (RGN) trailers.

"The helicopters are 52 feet long, 11 feet wide, and 12.5 feet high," he explains. "The over-dimensional length of the helicopters required three-axle expandable lowboy trailers.

"The third is a Logistics Vehicle System Replacement cargo truck moved from Florida to South Carolina," he says. "The truck measured 432 x 101 x 106 feet and weighed 53,500 pounds. We used a three-axle step-deck as a less expensive solution to an RGN."

In the United States, project cargo moves aren't uncommon. Pipeline sections, large equipment, zoo animals, or any number of other obscure shipments move through the U.S. transportation network every day. The logistics challenges of domestic military and civilian shipments are often comparable.

"There's an old expression that is sometimes true in the logistics business: parts is parts," Hooper says. "The mechanics of the processes are often similar, but the shipping requirements are often different. They are more intricate when you have to coordinate a helicopter on a specialized trailer."

On top of the usual challenges, however, DoD contractors must overcome myriad licensing and security roadblocks.

"The scrutiny you're put through to become an approved services provider is generally greater than that in the private sector," says Hooper. "Base access is also a challenge, because virtually all bases require extensive driver background checks. This slows the process."

Even when military units move their own domestic shipments, logisticians face significant regulatory hurdles. Loggies frequently travel to obtain proper certifications on location at military installations, and participate in training through online modules and classroom instruction within their units.

"Right now, we are in the process of identifying qualified re-fuelers to receive bulk fuel from a Defense Logistics Agency (DLA) vendor, then distribute it at points along a 400-mile convoy route," says Barthen. "Each operator needs to be certified by unit leadership and validated by DLA before the vendor will schedule delivery.

"To enable the operation, we're ordering additional spill containment materials and coordinating with commercial landowners to conduct our refueling operations on their property," he adds.

Military logisticians solve complicated problems quickly, are trained to overcome any challenge, and keep a cool head under pressure. That's valuable in any logistics operation.

Military vehicles have come a long way from the jeeps and cargo trucks we see in old episodes of M.A.S.H. The trucks that move freight across war zones can't just be functional, they must also be tactical.

Technological advances in vehicle manufacturing have contributed to safer, more efficient vehicles. For example, Pailton collaborated with tier one vehicle manufacturers to provide lightweight steering systems that enabled a top speed of 70 mph for some tactical vehicles. The weight of components and armor left older military vehicles with a top speed of 50 to 55 mph.

In addition to performance, quality is also crucial. An equipment failure in a combat zone isn't just an inconvenience—it can mean life or death. Fortunately for our troops, we now live in a world of big data, and information gathered in the field and through tier one manufacturer testing can be used to design and build stronger, more reliable equipment.

"With enough vehicle data from our customers, we are able to compile a block testing program on our test rigs that match the same loads and frequencies of the real-life conditions," Sonahee says. "This demonstrates the importance of collaboration, communication, and sharing data.

"Success in the industry has been driven by the vital collaboration between tier one manufacturers and suppliers as part of the design and testing process," he adds. "We should celebrate this."

Related Articles
Military and Manufacturing Outsourcing: Not All Guns and RosesThe Keys to Dangerous Goods/Hazmat Shipping ComplianceTurn to Technology to Attract the Next Generation of WorkersTransparency to Efficiency: How IoT Can Increase the Productivity of Your Transportation (Sponsored)5 Hacks for Recruiting in Supply Chain ManagementAdding Value to Your Supply ChainCarrier Network Plants Seeds of Delivery EfficiencyIncoterms: Playing by the RulesMost Mid-Market Supply Chains Are Under-ServedRedefining Globalism? More related articles...