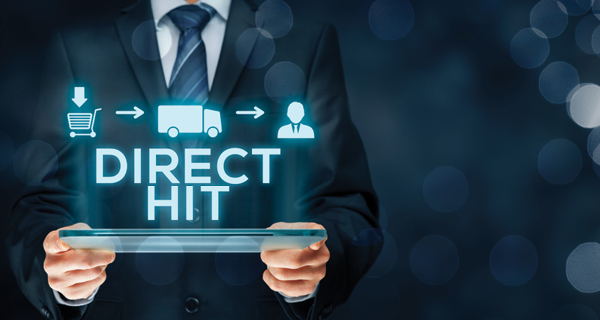 E-commerce has forever changed the way people shop. Now businesses of all sizes must reassess their supply chains to go direct to the consumer with faster-than-fast delivery and free shipping.

In Meredith Wilson's classic The Music Man, River City residents line the street when the Wells Fargo wagon rolls into town. They wait for delivery of salmon from Seattle, grapefruit from Tampa, raisins from Fresno, a bathtub, a cross cut saw, and, of course, musical instruments for the town band.

Times have certainly changed, but customer demand has not. As direct-to-consumer (DTC) strategies, and the technologies utilized to implement them, have ramped up the velocity at which goods flow through the supply chain, horse-drawn wagons have given way to drones and robot delivery vehicles.

"DTC is not a new concept," says Frank McGuigan, president and COO of Frisco, Texas-based Transplace, a non-asset-based logistics service provider. "What's brought DTC to the forefront is the ability of e-commerce channels to provide a broader spectrum of products directly to consumers."

"Compared to low overall retail growth of just 1 to 2 percent, e-commerce is on fire"—a $370-billion market expanding at a 15-percent compound annual growth rate that currently accounts for 8 percent of overall retail sales, according to a recent report compiled by A.T. Kearney and published by the Council of Supply Chain Management Professionals.

E-commerce "presents a fundamental shift in how consumers shop," says the report. "Instead of firms pushing cases and pallets to physical stores, e-commerce has consumers pulling customized baskets to their desired location, whether home, a nearby store, or other convenient location such as lockers. This push-to-pull model has created a structural change in underlying supply chains and the movement of goods in terms of product flow, location of assets, delivery mode, and enabling technologies and analytics."

Analog Mode in a Digital World

Customers today "live in a digital world, while many businesses continue to operate in analog mode with a 50- to 60-year-old business model," notes Melissa Runge, vice president of analytical solutions at Spend Management Experts (SME) in Atlanta.

"They're increasingly unwilling to shop that way, so companies that hope to be around in the future have to reconfigure their supply and distribution chains to better conform to customer expectations," she says. "The age of waiting for new products to appear on store shelves is over."

Social media and technology "have radically increased customer expectations to the point where they want to order a product and have it delivered tomorrow, if not sooner," Runge adds. "Business is moving down that trajectory and won't go back."

DTC is all about customer expectations, he says. "In a world where social media plays a dominant role in how people shop, they have unspoken expectations—I will get my order quickly and I will not pay for shipping and handling," Jones says. "Manufacturers and retailers have to adapt."

Zurvita, a Houston-based manufacturer of wellness and healthcare products, recently selected Saddle Creek to provide direct-to-consumer fulfillment services. The company operates as a "direct seller" with consultants across the country selling products directly to the public.

"We work with two layers of customers—the consultants as well as the customers who purchase the products," says Jones. "That adds another dimension to work through. The plan calls for Zurvita corporate to process the orders, and then pass them on to us to fulfill."

While operations will initially be handled from Saddle Creek's 1.54-million-square-foot Fort Worth facility, the 3PL's nationwide network of 43 distribution centers gives Zurvita the option to add locations in the future.

"Over the past five years, we've grown from $3 million to $100 million in revenue, and we're planning for significant growth in 2017," says Tanya Frantz, vice president, supply chain and distribution at Zurvita. "Stepping up our fulfillment game is critical."

Some companies are taking a different road to DTC satisfaction by handling fulfillment operations entirely in-house.

The company's waxes, polishes, and other products are compounded around the country and then shipped to Denver, where they are bottled, labeled, warehoused, and distributed out of the same facility via FedEx and the U.S. Postal Service, according to Nick Mertz, the company's chief operating officer.

"It was Jay's plan from the start to skirt the retail chains by selling via the Internet and going direct to the consumer," Mertz says. "People want instant gratification and better products at a better price. The best way to achieve that is to eliminate the middleman in an effort to cut costs. That's not going to change."

Exploiting the advantages of centralized distribution of quality products with brand name recognition directly to customers, "has added up to steady growth in our business since we sold our first product in November 2016," says Mertz. "We have a vision to utilize e-commerce and additional distribution centers to deliver directly to our customers. We feel strongly that that track will make us the top brand in the market within the next 10 years."

The 800-pound gorilla in the room, is, and will remain for now, Amazon, which is climbing the ladder to near total domination of direct-to-consumer order fulfillment.

In March 2017, Amazon invited top-level executives from several major consumer packaged goods (CPG) companies to a three-day meeting to discuss "a major shift in thinking." Amazon wanted to explore how its suppliers could speed delivery of their products and meet the needs of increasingly demanding consumers by bypassing retailers such as Walmart and Target and dealing directly with them.

The invitation to the event read, in part: "Times are changing. Amazon strongly believes that supply chains designed to serve the direct-to-consumer business have the power to bring improved customer experiences and global efficiency."

With Amazon setting the pace for how goods move between supplier and seller, the question is whether there will be an eventual "Amazonization" of domestic, and even global, supply chains.

That visceral need to touch and feel has created a "delicate equilibrium between what consumers see on a computer screen and what they want to see, touch, and feel before they buy," he says. "I don't think they've found that balance yet."

Does Amazon have the fulfillment capability to put pressure on those retail outlets?

"Without a doubt," says McGuigan. "They already are. But, if you look at retail shopping, dollars spent are up, while foot traffic is down. Some companies are being pushed out of business while others are holding their own and trying to remain competitive by coming up with their own e-commerce strategies."

The direct-to-consumer strategy "isn't quite refined," he says. "It doesn't have its fine edges just yet. I do see some definition though, as there appears to be no end in sight to what's possible."

Within the next three to five years, McGuigan predicts we will see "clearer lines of engagement on the differences between e-commerce and walk-in retail and the market shift in building supply chains to more effectively serve increasingly demanding customers; fewer full truckload shipments into the large distribution centers that serve large retail outlets; and different channels with smaller movements going to local DTC-configured fulfillment centers with online buying for everything from toothbrushes and shaving cream to waffle makers and computer peripherals."

One major challenge in maintaining the heated pace DTC demands have set is the issue of "having to maintain maximum inventory in place, as well as the capability to move it quickly both in and out," says Spend Management Expert's Runge.

"Rather than a large shipment to a large retail store, there is a resulting movement toward 'single pick,'" she says. "Product handling automation and more efficient inventory control and warehousing systems will be increasingly crucial to fulfilling customer orders."

Businesses "will continue to see the demand for same-day delivery increase," Runge adds. "But eventually, consumers will realize that it's just not possible to deliver everything the same day they order it.

"We will reach a plateau when people realize what is realistic and what isn't. The market will drive that," she says. "Trucks will get caught in traffic jams, flights will be delayed, drones will fail. Believe it or not, there are some situations even Amazon can't control."