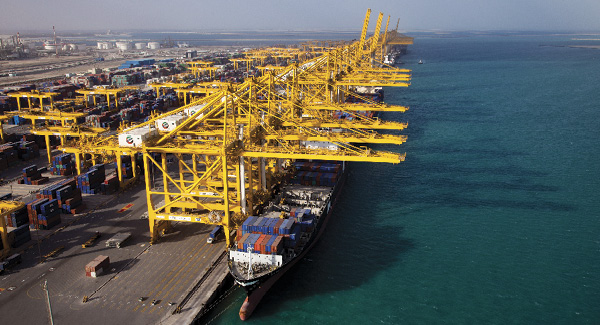 It's why despite the Middle East's fast ascent as a global airfreight hub, the region is challenged by air traffic congestion. Airports and airlines do their own thing in the absence of regional partnership and authority.

Lesser economies have similarly failed to benefit from foreign interest and investment, especially in Emirati cities such as Dubai and Abu Dhabi. Different countries have unique strengths. For example, while UAE is the freight and distribution hub of the Middle East, Qatar is its knowledge center and Oman is fast gaining a reputation as an incubator for entrepreneurial businesses. The sum of the region's parts is more attractive than GCC states going it alone.

The maritime trade shows signs of progress. GCC countries are slowly seeing the advantages of connecting disparate transportation and logistics assets to create a more regional solution. For example, Oman Rail is tendering bids for the construction of a 750-mile railway extension that will link its three ports at Sohar, Duqm, and Salalah with the national rail network and the GCC-wide rail system.

Both developments are positive signs that GCC countries are beginning to recognize their complementary assets and, more importantly, are receptive to further collaboration on a regional scale.

How will Cuba leverage improving diplomatic relations with the United States to spur economic development? The communist country has a population of 11 million people—one quarter live below the poverty line—and its proximate position between Florida and Panama makes it an ideal distribution hub for the Americas. From a labor and location perspective, Cuba has the requisite resources to become an attractive place to do business.

Now a third piece—logistics infrastructure—is beginning to materialize. Talk of transforming Cuba's Port Mariel into a regional transhippment hub received a shot of credibility when CMA CGM announced that it will operate a logistics platform at the port in cooperation with Cuban logistics company AUSA. The French steamship line has been active in Cuba since 2000, and is one of only three carriers that currently serve the country.

CMA CGM LOG, the company's freight forwarding and logistics arm, will operate a nearly two million-square-foot site in the Mariel ZEDM, a special economic zone dedicated to logistics and industrial activity at the port. CMA CGM LOG will be responsible for import deconsolidation and distribution on the island, export consolidation, and import/export warehousing.

China's maturation from the world's factory floor into a more balanced production and consumption economy continues unabated. In its wake, no country is safe—even at the risk of cannibalizing its own.

Taiwan shares an uneasy political relationship with its cross-strait neighbor, sovereign in name only. The country has a well-entrenched legacy manufacturing high-tech electronics. For the longest time, this competency dovetailed with China's low-cost labor-driven model. Now, however, Taiwan faces new competition from China as it moves upmarket in the supply chain.

The threat of the "red supply chain" is very real, according to a recent article in Taiwan's China Times. Gou Tai-chiang, chairman of the Taiwan Electrical and Electronic Manufacturers' Association, fears China's shift to higher-value manufacturing will hurt Taiwan's semiconductor industry.

Supporting Gou Tai-chiang's claim, recent statistics from the Ministry of Economic Affairs reveal that Taiwan's export orders in April 2015 declined four percent year-on-year, the first drop since July 2013. China is Taiwan's largest export partner so any change in demand will have a corollary impact on Taiwan's economy.

As Indian Prime Minister Narendra Modi looks to continue his ambitious modernization program, he is touting Korea as a potential model and suitor. Meeting with his counterpart South Korea President Park Geun-hye in Seoul recently, Modi underscored the importance of finding a partner that can share in his country's economic ascent.

"I am here at a time of renewed momentum in the Indian economy," he stated. "We are pursuing a comprehensive program of economic modernization that covers all sectors of our economy and all aspects of policies and procedures."

Modi is especially enamored of the prospect of leveraging Korea's well-regarded manufacturing pedigree to help spur India's domestic renaissance. He is specifically interested in luring Korea's defense industry to India as a means to build both economic and diplomatic ties.

Korea, in turn, has pledged $10 billion to finance infrastructure projects. The Ministry of Strategy and Finance and the Export-Import Bank of Korea will create a $1 billion Economic Development Cooperation Fund and provide $9 billion in export credits to India.

Reflecting the magnitude of the meeting, India elected to conduct a "2+2" dialog with Korea, involving both foreign and defense secretaries. It has employed such a format only once before, in negotiations with Japan in 2010.

Modri's trip to Asia, which included visits to both Mongolia and China, comes at an important juncture in India's reformation. The prime minister has been aggressive in reversing the country's regressive protectionist policies, and has similarly endeavored to simplify regulatory bureaucracy by rolling out the Goods and Service Tax.

One other important consideration: China's motivations and machinations to establish a new economic partnership and trade corridor with Pakistan—with whom India has a notably contentious relationship—no doubt upped the ante for India to seek further intra-Asian support. 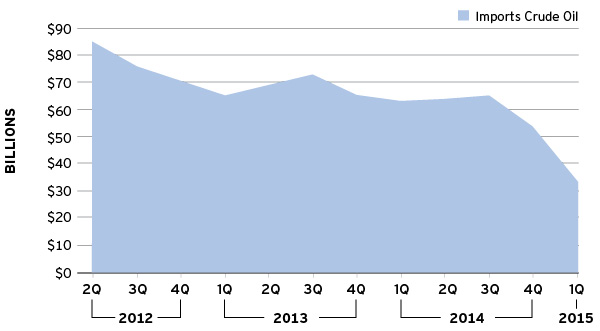 In Q1 of 2015, U.S. crude oil imports were at the lowest value seen in more than eight years. U.S. oil reserves continue to build up and push prices down, although U.S. oil exports slumped in Q1, dropping to similar values seen in 2013.