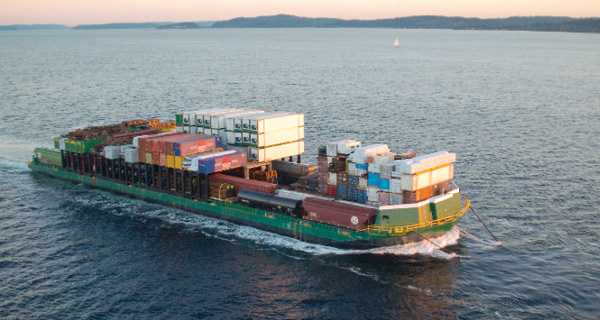 The road to success in the Last Frontier is paved with logistics demands and challenges.

At 586,412 square miles, Alaska is the largest U.S. state in land area—more than twice the size of Texas. Its road system, however, covers a relatively small area of the state, linking the central population centers and the Alaska Highway, the principal route out of the state through Canada.

Many cities, towns, and villages in Alaska do not have road or highway access at all—the only modes of access involve travel by air, river, or sea.

Among the roads that do exist, only 31 percent are paved, according to the 20th Annual Report on the Performance of State Highway Systems, a study by the Reason Foundation, a public policy research organization. And with rugged terrain and extreme weather in much of the state, moving cargo to, from, and within Alaska can be challenging.

But Alaska is also a land blessed with an abundance of natural resources, including crude oil, natural gas, and seafood, which translates to high demand for logistics services. Savvy shippers and logistics providers know success in Alaska is a matter of balancing the demands with the challenges.

"Alaska's extremely varied topography and harsh climate present challenges for shippers and logistics companies," says Joe Samudovsky, director of cargo sales at Alaska Air Cargo, which has been operating in Alaska for more than 80 years. "Its geographic features—along with strong winds, extreme temperatures, precipitation, and periods of dense fog—can create obstacles for any transportation mode. Dealing with these obstacles is the key to success for any transportation operations in the state."

Alaska's unique environment means the state's shippers and logistics providers must be prepared to handle shipments differently than in the lower 48.

"The top physical challenge in Alaska is the extreme weather," says Steven Selvig, vice president of sales and marketing at Tualatin, Ore.-based trucking company Reddaway. "The average temperature in Alaska year-round is slightly above freezing. That creates conditions the rest of the United States simply isn't accustomed to."

"It's important to understand all the transportation alternatives," says Alex McKallor, chief operating officer and executive vice president for Alaska-based Lynden Incorporated, a family of transportation and logistics companies. "Alaska's seasonal ice can mean some areas are accessible by water in the summer, but not in the winter, for example. Shippers have to be aware of those factors, and be able to adapt as needed."

A majority of Alaska requires the use of multiple modes, which means shippers must prepare cargo to move via any combination of marine, surface, or air transportation, which can be a challenging and complex proposition. Lynden operates its own vessels, trucks, airplane fleet, and even hovercraft in some areas, offering shippers a single carrier contract that simplifies complex shipping problems.

"Shippers outside the state may not fully grasp the magnitude of Alaska's logistics challenges," says McKallor. "Our single carrier contract can help ease some of the anxiety. We also tie all our companies together through our Web services, so shippers can always see where their freight is, even when it's moving by multiple modes."

Reddaway, which serves Alaska in partnership with Pacific Alaska Freightways, has also taken steps to simplify shipping, offering a single point of contact to customers to improve visibility throughout the state. The company uses electronic data interchange to update shippers on cargo at each significant point along a route.

"Some companies purchase domestic 48-state service with one carrier, and the shipment terminates at the Port of Tacoma. It then transfers to an Alaska consolidator, and starts a second shipment," says Selvig. "That Alaska consolidator may not provide shipment visibility. But the streamlined solution of Reddaway and Pacific Alaska Freightways means not only continuous movement of freight from its point of origin in the lower 48 to its delivery point in Alaska, but also full visibility throughout the entire experience."

Another logistics challenge unique to Alaska involves moving large pieces of equipment and spare parts to remote areas of the state to serve the oil, gas, and mining industries. Supporting these industries requires specialized equipment to accommodate high, wide, and heavy loads.

"Some of the oversized pieces and parts needed to keep mines and oil rigs running in Alaska cannot be belly loaded in passenger aircraft," says Alaska Air Cargo's Samudovsky. "For oversize or heavyweight shipments, we can deploy our B737-400 Freighter or B737-400 Combi aircraft to get the job done."

Meanwhile, Lynden uses a rail barge service to help overcome some of the challenges unique to Alaska, such as moving railcar loads of bulk chemicals needed in the oil fields of the North Slope or in remote mining facilities.

"One mine we service is above the Arctic Circle," says McKallor. "We move 50,000 tons of supplies each year during a 100-day, ice-free window to support the mine."

One of Alaska's best-known exports is seafood. Ensuring that fresh or frozen seafood makes it from Alaska to the rest of the world in prime condition requires keeping temperatures stable while moving between destinations where the climate may vary dramatically.

"Ensuring safety and quality in the seafood supply chain is critical," says Samudovsky. "That is why Alaska Air Cargo partnered with the Alaska Seafood Marketing Institute and one of our seafood customers to develop a cold chain training program that all cargo employees are required to participate in. The program helps increase awareness for the safe and efficient handling of perishable seafood."

Lynden ships both fresh and frozen seafood, and also delivers many of the materials needed to support Alaska's fishing industry.

"We serve many of the seafood processing plants located along Alaska's vast coastline, bringing in fishing supplies and packaging materials," says McKallor.

Tourism and outdoor recreation also make up significant parts of the Alaskan economy, necessitating the shipment of a wide range of related products. Some logistics providers work with customers to arrange solutions that help better meet Alaska's unique logistics needs.

For example, Reddaway serves a sporting goods business that operates four stores in Alaska. Because each store had a high volume of regular shipments, Reddaway worked with the retailer to offer exclusive-use containers for each store.

The company's products now move from its distribution center in Utah to the Port of Tacoma, Wash., where—because Reddaway and Pacific Alaska Freightways are asset-based and own their docks—the freight can be held in order to build straight loads.

"We build loads on the dock in Tacoma, then move them directly to the retailer," says Selvig. "It brings shippers tremendous value because they don't have to worry about additional handling—everything moves together purely for that shipper."

Transporting health-related products or drugs is another significant challenge in Alaska, especially when patients are located in far-flung villages.

"When it comes to healthcare logistics, Alaska's limited highway system and extreme weather present the same difficulties experienced in third-world countries," says Samudovsky. "Transporting pharmaceuticals, blood supplies, and lifesaving vaccines to remote villages in Alaska is important to the communities we serve.

"With Alaska Airlines' growing network, we can transport a shipment of pharmaceuticals from Phoenix, where the outside temperature might be 120 degrees on the tarmac, to rural Alaska, where it could be minus 60 degrees," he continues. "Planning for these extremes, and making sure the shipment is expedited to a temperature-controlled environment, is critical."

The challenging conditions in Alaska mean air transportation is more vital than in other parts of the United States. Products such as construction equipment, sheetrock, lumber, and cement that typically move via surface transportation in the lower 48 must often move by air in Alaska.

For example, the state capital, Juneau, is not accessible by road. Making matters worse, Juneau is difficult to fly into, and often plagued with fog and wind challenges. Alaska Air Cargo relies on the Juneau Airport Wind System (JAWS), an air turbulence system that alerts pilots about severe wind conditions at and around Juneau International Airport.

A heavily used approach takes aircraft through the 15-mile-long Gastineau Channel, which is flanked on both sides by mountain ranges that create moderate to severe turbulence. After several close calls, the Federal Aviation Administration (FAA) suspended certain flight paths, and some carriers stopped serving Juneau due to multiple cancelled flights.

Alaska Airlines—a subsidiary of Alaska Air Group, which serves Alaska, the continental United States, Hawaii, Canada, and Mexico—worked with the National Center for Atmospheric Research and the FAA for 18 years to develop JAWS. It was formally commissioned in July 2012, but data from JAWS has already enabled Alaska Airlines to operate at the airport for more than one decade with a flawless safety record.

The JAWS equipment provides wind shear and turbulence data airlines can analyze to provide a go or no-go recommendation to pilots arriving and departing Juneau.

"Alaska Air Cargo also has one of the industry's youngest and most efficient aircraft fleets," says Samudovsky. "We are well-equipped to deal with the best that Mother Nature can throw at us to get the job done for our customers."

Whether it's getting fresh tomatoes to Bethel or a critical machine part to the North Slope, moving cargo into, out of, or around Alaska will always involve challenges.

"It's a logistical exercise to supply Alaska's residents in remote areas with everyday necessities," says McKallor. "For example, from the time a head of lettuce leaves California and moves to Alaska, it's traveled much farther than it would have had it crossed the entire United States."

While logistics may never be easy in Alaska, logistics providers that take extra precautions, focus on safety, and plan ahead for seasonal changes may find Alaska a land full of opportunity.

A closer look at Alaska's transportation infrastructure reveals how these connections and resources affect logistics operations in the state.