Healthcare Logistics Gets a Shot in the Arm 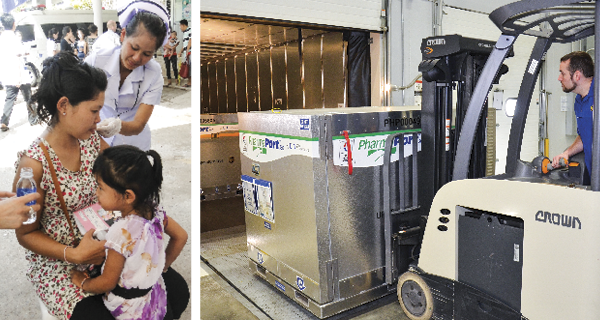 Precise time and temperature requirements guided the effort to transport donated influenza vaccines from the United States to be administered in Laos.

Transporting temperature-sensitive flu vaccines to developing countries can be a headache. A logistics partner that stays cool under pressure provides a cure.

Influenza, a contagious respiratory illness caused by viruses, can bring on mild to severe illness—and even death. The best way to avoid contracting the flu is by getting vaccinated annually, but in low-income and developing countries, administering vaccinations presents a number of challenges, from education to logistics.

In 2010, the federal government's Atlanta-based U.S. Centers for Disease Control and Prevention (CDC), along with a coalition of donors, launched a program to address vaccine logistics.

"In the United States and other developed economies, most years end with plenty of flu vaccine left over," says Dr. Joseph Bresee, chief of the Epidemiology and Prevention Branch of the CDC's Influenza Division. This vaccine must be destroyed and disposed of.

"About three years ago, drugstore chain Walgreens, which was also struck by the amount of vaccine left over annually, approached the CDC about putting the surplus to use," explains Bresee.

The CDC reached out to its international partners to see if any countries were interested in receiving a vaccine donation. Through a process that determined the best potential recipients, the CDC selected the Southeast Asian nation of Laos for the program launch.

In 2012, Deerfield, Ill.-based Walgreens donated 375,000 doses of surplus vaccine to Laos. Delivering the vaccine for the program, however, posed a major logistical challenge.

One challenge was transporting the vaccine from Walgreens' storage facility in Louisville, Ky., to Vientiane, the capital of Laos. From there it had to be disseminated for use by the Laotian Ministry of Health. The process was further complicated by the need to keep the vaccine within a very tight temperature range throughout transit.

The CDC turned to Atlanta-based expedited carrier and logistics provider UPS because of the strong working relationship between Walgreens and UPS.

"The project was a challenge," admits Dimitri Zacharenko, manager of temperature-sensitive healthcare solutions, UPS. "There was no setup to fly the vaccine directly into Laos, so we had to consider outside-the-box solutions that would deliver the vaccine closest to Laos."

Because the small, regional aircraft that flew into Vientiane was not able to carry cargo containers, UPS had to look elsewhere. The closest appropriate airport was in Bangkok, Thailand. From there, the carrier orchestrated a 19-hour truck move to Vientiane.

Typically, shipping into Laos is operationally and logistically prohibitive, with restrictive Customs and regulatory requirements. Because of the project's unique nature, however, UPS was able to work around these obstacles.

"Because we were dealing with the Laos Ministry of Health, we had the government's cooperation in border crossing, and the ability to tender the product directly to the ministry," notes Zacharenko. "Thankfully, we didn't get bogged down in Customs issues or other government red tape."

From a technical perspective, the CDC and UPS had to meet two principal requirements in shipping the vaccines to Vientiane: temperature and time. First, the vaccine had to remain at a temperature range within 35.6 degrees to 46.4 degrees Fahrenheit across the supply chain. That's a major challenge, given the summer heat in Southeast Asia.

Second, because influenza programs are structured in campaigns based on the disease's seasonality, the vaccine has a strict time window for arrival—it must be administered before the virus begins to spread. In this case, time also had to be considered for internal handling and shipping within Laos.

To meet these needs, UPS tapped its Temperature True dedicated service, which is specifically designed to safeguard temperature-sensitive shipments. For pharmaceutical and life sciences manufacturers, it provides door-to-door transportation of vital products based on precise, measurable operating procedures, including:

Temperature True proved to be up to the task. "The CDC didn't lose any vaccine," says Bresee. "UPS maintained the full shipment at the correct temperature, and delivered it on time. Once the Laotian Ministry of Health had custody of the vaccine in Vientiane, it took over responsibility for maintaining the required conditions."

More than 90 percent of the flu vaccine was administered throughout the country in about two weeks.

The initial program was so successful that the CDC repeated it in May 2013. UPS delivered nearly 100,000 flu vaccinations to Laos, just in time for Southeast Asia's flu season. This time, bioCSL, an Australian pharmaceutical manufacturer, donated the flu vaccine.

While still destined for Laos, the shipment originated in a different part of the world, involved coordination with a new donor, and required UPS to work with multiple Australian commercial carriers to transport the vaccines to Bangkok for trucking to Laos.

In 2012, UPS used its own fleet to ship the vaccine from Louisville to Anchorage to Inchon to Shenzhen to Bangkok, but in 2013, the carrier had to be more flexible. "This speaks to the robustness of the Temperature True program," says Zacharenko. "UPS is not only a carrier, but also an integrator. We can expand our footprint by using a combination of capabilities."

To maintain these strict temperature tolerances, as well as monitor location and other shipment data, UPS equips the container with integrated environmental sensors and GPS/GSM communications capabilities.

"We were able to move the product in those containers because we didn't have to stop and re-ice or recharge," says Zacharenko.

The airfreight containers arrived in Bangkok, where workers staged them, then loaded them on trucks for the trip to Vientiane.

In 2013, the CDC extended the program beyond Laos to Nicaragua, which is using 30,000 doses of donated vaccine to expand its existing flu vaccination program. The vaccine is being distributed via the country's already-established network of vaccination sites.

Additionally, UPS helped ship approximately 6,000 doses of vaccine in pre-filled syringes from Japan to Uganda on behalf of the U.S. Air Force and the U.S. Department of Defense.

"We see this as a humanitarian program, but also as a U.S. health security program," says Bresee. "One of our chief tools in security for pandemics is to make sure that countries around the world are using vaccines. So when a pandemic pops up, these countries are primed to use vaccines and administer programs."

Cost is a huge issue in shipping goods that have to be temperature regulated, and the CDC has managed the influenza vaccination program by defraying costs. UPS donated the use of its cold shipping containers, which is a large part of the logistics expense, and the CDC picked up the other parts of the shipping costs.

"As we expand the programs with more donors and countries, the transportation and logistics issues will grow increasingly more complex," says Bresee. With UPS as its logistics partner, however, the CDC's program should receive a strong and healthy prognosis.