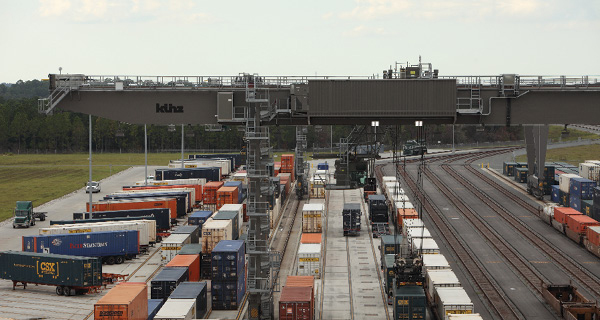 Intermodal use continues to grow and is earning its place in the spotlight as a way for shippers to optimize cost and mitigate risk.

Rail intermodal continues to grow and to garner glowing reviews from users. Shippers select intermodal to move everything from raw materials such as grain and coal to manufactured goods including furniture and cars—plus produce and other food products. Long-haul freight transportation using rail and at least one other mode (typically truck) hit record volumes in 2015, with 13.7 million units moved—more than double the 5.9 million units shipped 25 years earlier in 1990, and about a 1.5-percent increase over 2014, according to the Association of American Railroads (AAR).

More evidence of growth: The number of intermodal containers and trailers used in 2015 was up 1.6 percent when compared to the same period the year before.

Will intermodal growth continue? Shippers think so, and say they expect to see that 1.5-percent increase in intermodal volume hold steady through the third quarter of 2016, reveals Wolfe Research's 2015 State of the Freight report, based on a survey of more than 600 shippers.

The AAR attributes the growth in shipper use of rail intermodal over the past two decades to a number of factors. One is the railroad industry's investment in the future of intermodal. Railroads have spent tens of billions of dollars on the infrastructure and equipment needed to support intermodal line haul and terminal capacity.

The rail industry's intermodal investments have focused on:

Freight railroads were projected to spend $29 billion in 2015 to maintain and expand their networks, notes the AAR in a 2015 report titled Rail Intermodal Keeps America Moving.

In addition to infrastructure upgrades, shippers increased rail use in recent years for other reasons, including higher fuel prices for trucks, truck driver shortages, and concerns about the environmental impact of truck transportation. Because freight trains can carry the weight of several hundred trucks (the rule of thumb is that one rail car equals three truckloads), they are more fuel efficient and less harmful to the environment than truck-only shipping.

On the flip side, intermodal use does present some disadvantages. Chief among them is reliability. Most analysts advise against using rail for shipments that are time-sensitive. Also, intermodal is cost effective only when shippers meet certain volume and distance requirements.

"Shippers should be looking at intermodal as an option when a full truckload has to travel more than 500 miles, which is about a one-day travel time," suggests Wesley Ann Barton, director of intermodal marketing at CSX Transportation (CSXT) Intermodal, a subsidiary of CSX Corporation. CSXT offers rail combined with truck transportation in major markets east of the Mississippi River. The company partners with regional railroads to move shipments farther west.

Shippers can save from 10 to 40 percent when shifting freight from over-the-road to intermodal, according to CSXT research. The amount saved depends on factors such as the markets involved and seasonality.

To help shippers determine if intermodal is a good fit, CSXT uses its proprietary Highway to Rail (H2R) Optimizer software, which reviews a company's shipping lanes to determine whether it can save money by converting a shipment to intermodal.

"About 96 percent of the companies we evaluate with the H2R Optimizer see an opportunity to convert to intermodal," Barton says. "What's more, because transportation costs comprise 63 percent of logistics expenses, supply chain managers see opportunities to zero in on that area to save money."

Living Up to Its Potential

Freight that moves between vendors, production facilities, and distribution centers tends to be a good candidate for intermodal, Barton says.

The retailer's intermodal spend, which comprises one-third of its inbound transportation costs, has more than doubled over the past five years as the company has become more confident in rail's service levels. Still, rail reliability hasn't fully recovered from late 2013 and early 2014, when the country endured record cold temperatures and snowfall.

"Shippers are starting to regain trust in rail service levels, but they have not yet reached pre-2013 levels," says Ron Guzzi, Home Depot's senior manager of transportation carrier relations and sourcing.

Access to rail is also essential for Pacific Steel & Recycling, based in Great Falls, Mont., which is building a processing facility in Ninigret North Business Park in Syracuse, Utah, near Salt Lake City.

In addition to recycling metal that it sells back to steel mills, the company processes and distributes steel products. At the facility currently under construction, Pacific Steel will process steel coils into flat pieces that it cuts to size for manufacturing or fabrication customers. The company will use rail to ship the coils from steel mills to the plant; it will ship out the processed finished product by truck.

"We looked at where the raw material comes from, and knew we needed to use rail to reduce transportation costs," says Ed Joyce, vice president of steel operations for Pacific Steel.

Small volumes and shorter distances will make trucking more cost effective for delivering finished product to customers. Packaging also plays a big role. "If product isn't secured properly in a rail car, the plates can tumble down like a house of cards," Joyce says. "It's easier to put the products on pallets and strap them down on a flatbed truck. We can then unload using a forklift or overhead crane."

While Pacific Steel found Salt Lake City a desirable site for its new facility for many reasons, including a strong manufacturing base and several interstate highways, access to a rail line was a must-have when it met with developer The Ninigret Group, L.C. to discuss the property.

Ninigret already understood the growing importance of rail and intermodal service to its tenants. When United States Cold Storage (USCS) purchased 35 acres in 2013 to build a 230,000-square-foot distribution and cold storage facility, Ninigret worked with the storage company to build a rail spur to the Union Pacific Railroad. USCS wanted access to two transportation modes, and viewed rail as a hedge against potential increases in over-the-road fuel costs.

The Ninigret Group has continued its commitment to developing rail-served property. Convinced by its experiences with USCS and other businesses that rail is becoming an essential element in site selection, the firm acquired Ninigret Depot, an 800-acre development with 10 miles of rail track near Salt Lake City in Tooele. Ninigret Depot is 25 miles to Union Pacific's Salt Lake City intermodal facility; Ninigret North Business Park is 36 miles from it.

"The ability to ship by both rail and truck is on the checklist that planners use when they evaluate sites," says Gary McEntee, principal, The Ninigret Group.

A western distribution center on a rail line is also attractive to companies bringing goods in from Asia by ship, McEntee says. Site selectors tell him that warehousing at West Coast ports can be cost-prohibitive, so they look for alternative sites farther east on the Union Pacific line.

"By locating DCs in a region such as Salt Lake City, with access to interstate hubs that reach other parts of the country effectively by truck, companies can import by super tanker, unload shipping containers directly onto rail at one of the West Coast deep water ports, and transport the containers to a more affordable facility on the rail line," McEntee says. "From there, the shipment can continue by rail or truckload."

Redman & Associates, a Bentonville, Ark., company that imports battery-operated toys and bicycles, realized it had to start doing things differently when it began spending $8 million in freight annually to bring in scooters, pogo sticks, and battery-operated vehicles from China.

These changes saved the importer hundreds of thousands of dollars, says Redman. Soon, colleagues at other companies started asking them for help saving money on shipping and related expenses. So, Redman spun off RR Logistics to provide related services, including third-party logistics consulting. The typical customer is a small business without supply chain staff selling to a retailer; RR Logistics takes on the sales role for the manufacturer, and then makes sure that the product gets delivered to the retailer cost-effectively and on time.

Get the Lead Out

Managing the delivery is important to the firm. "If we sell the product, the worse thing we can do is not deliver that product and get it on the shelves," says Bahn.

Whether it's with the parent company's products or a client's, Bahn looks at shipping options to determine the best mode, and integrates rail when lead time allows.

"The biggest issue with choosing rail more often is lead time," Bahn says. "If we're shipping from New Jersey to distribution centers across the country, and the purchase orders don't come in on time, we aren't able to use intermodal as planned, and have to switch to truckload."

Whether rail offers a true cost savings for RR Logistics customers often depends on the drayage from the rail line to the destination distribution center. "If the DC is 100 to 150 miles away, it makes sense," Bahn says. "When there's a 350-plus-mile dray from the rail hub, moving over the road might be the best option."

Some companies are exploring intermodal to manage risk. "When a trucking company has a capacity issue on a certain lane, shippers can develop a relationship with intermodal service providers to mitigate risk," explains Steve Vail, design lead at Manhattan Associates, an Atlanta-based supply chain commerce solutions provider. "Those relationships ensure they can get service even when capacity is tight."

Concerns about possible changes in truck driver hours of service are also encouraging shippers to explore intermodal transportation as an option to alleviate their dependence on trucking, Vail notes. He also sees an increased use of intermodal in Miami and southern Florida, particularly for food products including canned foods, potatoes, and rice. While it's difficult to move trucks in and then out again loaded with cargo, shipments can be delivered easily and cost-effectively by rail from as far away as Seattle.

Shippers who leverage the best that intermodal offers—combining trucking's on-time reliability with rail's cost and fuel efficiencies—have options that help them meet their supply chain goals while minimizing risk.

Intermodal Transport: 7 Ways to Save

Want to cut costs when incorporating intermodal and rail transportation into your supply chain? Here's some expert advice:

"If and when capacity gets tight, we want to deal with providers who control their boxes to ensure they can move our freight," says Guzzi.