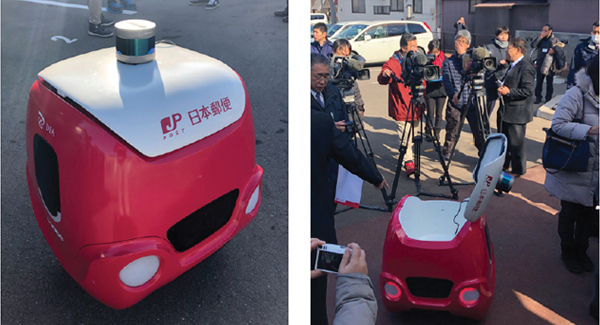 A self-driving delivery system could be the key to helping areas in Japan hit by the 2011 Fukushima earthquake.

Robot maker e-Novia is testing a self-driving delivery system in Japan to service the areas hit by the 2011 Fukushima earthquake.

e-Novia made its first test delivery in the city of Minami Soma with Japan Post, choosing YAPE, the self-driving delivery system made in Italy, as the provider for the tests.

The first phase of testing alternates indoor and outdoor sessions in the public buildings constructed for those displaced by the Fukushima earthquake. This trial represents the starting point for a potential long-term collaboration with Drone Future Aviation and Japan Post. As a result of these new tests, YAPE will evolve some of its features, including its suspension suitable for any type of road surface, load capacity, and thermal insulation for food delivery.

YAPE plans to continue its evolution during 2019, with other project initiatives in the United States (tests in mass market retail outlets), in Europe (food delivery), and in Italy.

Designed and built in Italy, YAPE, an acronym for Your Autonomous Pony Express, is the first autonomous electric vehicle for urban delivery. Its characteristics make it particularly suited for moving in the tight, irregular spaces of Italian and European city centers, both on the pavement or in bike lanes. YAPE travels on two wheels with autonomous electric motors that minimize energy consumption, while maximizing agility and allowing it to rotate on the spot and overcome obstacles.

The YAPE ecosystem is founded on a control platform that lets users, via an app, summon the robot to their house, for example. Users place a package weighing up to about 66 pounds into the holder and input the recipient's details into the app. The address can also be determined automatically by the recipient's GPS position if they are registered on the platform.

A system of credentials in the sender's and recipient's smartphones certifies the pickup and delivery of the package. The credentials also ensure the package holder is opened only by people authorized by the platform, whose identity is verified by the robot.

Related Articles
Turn to Technology to Attract the Next Generation of WorkersGOOD QUESTION | What’s your supply chain resolution for 2017?GOOD QUESTION | What logistics concerns keep you up at night?3PLs & Carriers: At Your ServiceFour Technologies Set to Change the Future of LogisticsSupply Chain Analytics: Creating Value from Data with Machine LearningAccurate Product Data Drives Supply Chain SystemsGOOD QUESTION | What disruptive innovation will have the greatest impact on the supply chain?To Boost Shipment Productivity, Look to the CloudMaking the Last Mile a Differentiator More related articles...