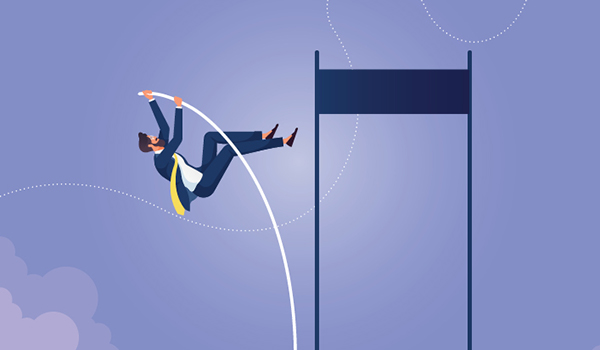 How enterprising small and mid-sized businesses vault supply chain challenges, including a pandemic.

Early in 2020, Mr. Lee's Pure Foods, a U.K.-based firm producing gourmet instant noodles, was focused on its business with European and Australian in-flight catering distributors. Then the pandemic halted most travel.

That presented two challenges: a loss of revenue and a surplus of inventory dedicated to the travel sector, says Damien Lee, the company's founder and chief executive officer.

About the same time, Mr. Lee's Pure Foods' launch in Whole Foods Markets in the United States was upgraded from a regional initiative to a national rollout across 480 stores. A promising change, yet Lee and his colleagues couldn't visit the company's California manufacturing partner, nor conduct in-store promotions to build brand awareness.

"The only option was to retreat to our virtual offices, like the rest of the world, and adapt the way we worked and communicated with our partners," Lee says.

Tackling the loss of the airline business also required a quick pivot to other channels, mainly online, to maintain income. By advertising on social media, and aided in part by the overall shift to e-commerce, online sales increased fivefold, Lee says.

Yet this also led to other challenges, including delays due to the increased strain on the postal system. And in some cases, failures in the company's dispatch processes—initially, they were tracking information across two systems—resulted in refunds or repeat deliveries.

To address this, Mr. Lee's Pure Foods accelerated its plans to work with a fulfillment company by about three months.

"Once all deliveries were consolidated into a single fulfillment partner, we had more control over the batches and could provide better updates as we reduced our service to normal delivery timescales," Lee says.

As part of this switch, Mr. Lee's Pure Foods integrated its web platform to the partner's shipping solution, freeing the team from manual data handling. To further expand within the United States, the company is "working hard to establish additional points of distribution and work with logistics providers that can help us lower costs," he adds.

Along with navigating the pandemic, Lee himself was undergoing treatment for cancer. But the work didn't stop, especially with the Whole Foods launch.

"It's about keeping the team pumped and pushed," Lee says. "We were lucky that we didn't have to furlough anyone, and they did a great job of keeping the wheels turning."

Just under one third—31%—of small businesses have seen a large negative effect from the pandemic, according to a recent Small Business Pulse survey from the U.S. Census (see chart). Thirty-eight percent saw a significant drop in revenue.

As the numbers show, few businesses have escaped the pandemic unscathed. Many retailers and consumer brands have been hit particularly hard.

"There are so many challenges when your primary place of business is no longer where people transact business," says Domm Holland, chief executive officer of Fast, an online checkout solution.

Instead, companies have had to move their businesses online. That has meant changing—in some cases, within days—the way they present and deliver products and accept payments.

Often, manual communication processes, such as email and fax, compound the challenges because they don't provide visibility to supply chain disruptions, Kieley adds. If shippers discover delays in real time, they can pivot to alternative suppliers and set expectations with customers.

Another challenge is that shipments from smaller businesses tend to be less consistent, and rarely run on the same day or to the same places, says Harris Rainbow, chief operating officer with NTG, a logistics provider.

Rather than contractual freight, small business shipments tend to be more "spot" in nature. That makes finding capacity a challenge at any time, but particularly when it's tightening, as it has been through much of the pandemic.

While not every business can completely escape the pandemic's impact, some enterprising ventures have adjusted and changed to successfully navigate through the pandemic. Here's a look at just a few.

Beginning in March 2020, customers from across the globe accelerated purchases for the gaskets, vents, seals, and other products made by Lancaster, New York-based manufacturer Sealing Devices.

"Customers started to pull in orders that were out in June or July," says Scott Walrath, director of operations with the third-generation, family-run business. Some needed to fill increased demand for ventilators and similar products, while others likely worried about the potential impact a lengthy pandemic could have.

While the increased orders were, of course, a positive, they also posed challenges. Some employees were concerned about coming to work during a pandemic, while others faced child care obstacles.

"We discussed how to service customers who were depending on us, but with fewer people and while keeping employees safe," Walrath says.

One step was to implement social distancing and temperature-taking protocols. Sealing Devices also moved part of its workforce from first to second shift to limit the number of people in the facility at one time.

One was a vertically mounted conveyor that would move goods through the facility. However, the system would have required a lengthy implementation period.

They instead turned to an autonomous mobile robot (AMR) from Fetch Robotics. The AMR transports carts of goods, limiting the number of operators who must manually move about the facility.

With the robot, "we can keep operators safe in their own workspaces, while getting products delivered to the work cell they need to go to," Walrath says.

During about eight weeks, Sealing Devices and Fetch collaborated remotely to map the facility, create workflows for the AMR, and link the robot to the company's network. They also created the interface employees use to direct the robot.

While workers initially watched the robot traverse the facility with "quite a few eyes wide open," Walrath says, they easily accepted it, and appreciate the safety it offers.

Moreover, the measures have paid off. Sealing Devices has been able to keep its employees healthy and also fill customers' orders.

By moving purchasing from operations to finance, DuraMark Technologies, which makes durable safety labels and decals, was better able to navigate the pandemic, says Brandon Mills, chief financial officer with the Westfield, Indiana-based firm. The goals of the shift were to take more of a financial perspective with respect to procurement and supply chain, and more closely manage cash flow, on-time deliveries, and payments, among other metrics.

For instance, Mills and his team focused on monitoring supplier quality and delivery. Each week the finance team began publishing several metrics, such as the number of late purchase orders. Since they've been doing that, the volume has steadily decreased. "Just seeing the number drives action," Mills says, as the metric takes on a higher priority.

They also implemented policies to streamline purchasing and cut costs, such as placing some orders every six weeks rather than every other week. "We try to balance the cost of ordering all the time versus the cost of inventory," he says. Mills and his team also set up multiple restocking agreements.

As part of this shift, DuraMark implemented a SourceDay solution that has eliminated many of the emails and calls that used to occur between DuraMark and its suppliers, and has also boosted transparency. "Now, we use one tool to communicate with sales, operations, and suppliers," Mills says.

As a result, expediting orders isn't as straightforward as it might initially appear. With the new solution, everyone involved in the order quickly knows the status of all orders.

Management had long considered adding e-commerce capabilities to the company's website to enable DuraMark to more efficiently work with smaller customers. With the pandemic, management allocated more resources to the effort, which went live in September 2020. It's steadily acquiring customers, Mills says.

REHRIG Relies on a 3PL

Early in the pandemic, "panic-buying set in" for the pallets, crates, pails, and other products Rehrig Pacific Company makes for dairies, bakeries, and other food and beverage companies.

"Although we do around-the-clock production, this was truly churning and burning," says Adrian Gil, senior logistics manager. "Every facility was at full capacity."

To avoid food and beverage shortages, Rehrig, based in Los Angeles, wanted to partner with a reliable supply chain provider.

Gil and his team turned to NTG, an Atlanta-based third-party logistics provider (3PL), to help meet the unexpected jump in demand.

"NTG demonstrated the ability to support our business," Gil says. "We often make unconventional requests because we serve a niche market. It comes with the territory."

One example: NTG's success in expediting a shipment for a broken machinery part meant the machine was operational the next morning. Throughout the pandemic, NTG was able to secure truck capacity with little lead time, even as overall capacity tightened.

Through its partnership with NTG, Rehrig was able to meet its customer commitments and even make additional commitments "that we may not otherwise have been able to make," Gil says.

As was the case for many companies and organizations, the COVID-19 pandemic brought both pain and opportunity to American Crane & Equipment Corporation, which manufactures overhead cranes and hoists, among other products.

"The pandemic offered an opportunity for us to grow and innovate to meet the challenges before us," says Karen Norheim, the company's chief operating officer and president.

The company's digital transformation, implemented within months, was about three times what it normally would accomplish within a year, Norheim says. The first few months, when about one-third of the workforce began working remotely, American Crane focused on implementing new virtual collaboration tools.

"When you work remotely, things that shouldn't be a big deal become difficult," Norheim notes.

One example: obtaining engineering approvals. To address this, Norheim and her team implemented a digital signature solution. They also began electronically transmitting CAD drawings and similar documents. In addition, they developed ways to conduct remote inspections by combining a mix of technology, including headsets, phones, and computers.

While American Crane had already planned to make these transitions, the pandemic accelerated the schedule.

"We plan to leverage these advances and continue the momentum," Norheim says. These advances might include Internet of Things and additive manufacturing initiatives, among other solutions.

Along with technology, the right business approach is critical. "The winds of change are always blowing," Norheim says. "We cannot direct the wind, but we can raise our sails and adjust as needed."

While every business is unique, several steps can help most organizations, no matter what size, address challenges like those presented by the pandemic.

Tap into others' expertise. To gain insight on managing through the pandemic, especially early on when so much was unknown, Karen Norheim, chief operating officer and president of American Crane & Equipment, turned to other business owners and industry groups. "We helped each other figure out what to do," she says.

Develop a resilient culture. Norheim calls it "grit." American Crane employees are used to solving thorny engineering challenges, she says. "We leveraged that culture of being willing to get the job done, and demonstrate perseverance, heart, and integrity," she adds.

Culture has also figured prominently at Sealing Devices, says Scott Walrath, director of operations. For starters, because the company regularly makes capital investments, employees are accustomed to adapting to new equipment. In fact, they named the robot brought on during the pandemic "Little G" in honor of the company's late founder, Terry Galanis.

Check the infrastructure. Anyone considering an autonomous mobile robot should make sure the facility's wireless network is strong enough to handle it, Walrath advises.

Ensure visibility among strategic partners. That way, everyone is better prepared to quickly react to changes, says Tom Kieley, chief executive officer and co-founder of SourceDay.

Where possible, help others while helping the company. Mr. Lee's Pure Foods, for instance, donated products to essential workers and food charities. This helped the recipients and addressed the overhang of stock the company had dedicated to the travel sector.