Logistics Hot Spots: What it Takes to Make the List 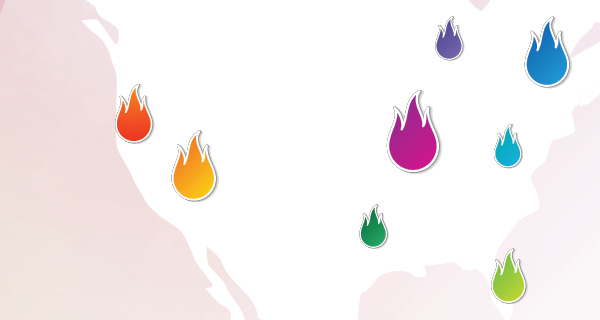 With a combination of compelling traits, some places are particularly well suited to supply chain operations. Here are 8 characteristics that define a logistics hot spot.

As companies search the U.S. map for places to build new manufacturing, logistics, and distribution facilities, cities and states compete for their attention. Every region touts a variety of logistics benefits, so how do you know where to set your sites? Here's a look at eight defining traits of a logistics hot spot.

The more competing transportation options you have for moving product, the better service you can expect and the less you'll pay.

Georgia is one state that earns high marks for transportation infrastructure. Assets there include an extensive interstate highway network, two Class I railroads, the most-traveled airport in the world, and two busy seaports, Savannah and Brunswick.

New projects are making Georgia an even better choice. "The ports recently broke ground on the Mega-Rail expansion, which will double their capacity to handle rail movements," says Matt Markham, director of the Center of Innovation for Logistics at the Georgia Department of Economic Development.

Also, the Appalachian Regional Port, an intermodal facility under construction in Northwest Georgia, will add capacity, improve access to markets in the Midwest, and help to reduce transit times.

Looking to the future, the Georgia Department of Transportation has announced plans to start construction in 2025 on the nation's first highway for commercial vehicles only, on 45 miles of I-75 between Macon and the Atlanta metro.

"The highway will get trucks out of the general-purpose lane so they can move more efficiently and safely," Markham says.

One city that boasts such enviable access is Memphis. "The population center of the United States is just to the north of Memphis," says Mark Herbison, senior vice president, economic development, at the Greater Memphis Chamber. Advocates say that Memphis is closer to more metropolitan areas overnight by truck than any other U.S. city.

The second-largest river port on the Mississippi, five Class I railroads, and one of the world's busiest cargo airports also extend Memphis's reach. A special benefit is proximity to the FedEx Super Hub, which lets companies turn over shipments to the parcel carrier in the wee hours and still get next-day delivery.

"Companies can literally add another eight-hour shift to their operation by being close to the FedEx Super Hub," Herbison says.

That late cutoff makes Memphis a magnet for companies that trade on speed, such as medical device manufacturers that ship products at night for use in surgery the next morning.

For companies whose trading partners span the globe, the sweetest spot may lie near a coastal port. That's why Los Angeles County touts its access to the Pacific Rim.

"You can get from the Port of Shanghai to the Ports of Los Angeles and Long Beach in 13 days," notes Michael Smith, international trade manager at the World Trade Center, Los Angeles. From there, product can move via road or rail to any market across the United States in seven days or fewer, making the trip faster and less expensive than sailing through the Panama Canal to a port on the Gulf of Mexico or East Coast.

Los Angeles-Long Beach sees a high volume of traffic from South America as well, including agricultural products and precious metals. "Also, being so close to Mexico, we see a lot of inflows coming from Tijuana up through Los Angeles," Smith says.

Among the companies attracted to Los Angeles are overseas firms trying to crack Western Hemisphere markets. One example is Tritium, an Australian company that makes systems for charging electric vehicles.

"Tritium will have manufacturing here not only to reach the United States, but also to connect to Mexico and Latin America," Smith says.

A distribution center or factory can be a power-hungry operation. That makes reliable, inexpensive electric power an important attribute. Access to broadband and other utilities can also prove crucial.

Logistics operations in Nebraska benefit from the fact that all electrical power in the state comes from publicly owned utilities. Companies that site operations in Nebraska pay overall rates that are 13.2 percent lower than the national average, says Dave Rippe, director of the Nebraska Department of Economic Development.

Because the ratepayers own them, those public utilities can reinvest millions of dollars in infrastructure, keeping service highly reliable, he notes.

Businesses in Nebraska also gain ready access to the internet. "Nebraska has 10 Tier 1 carriers, and 85.5 percent of Nebraskans have access to wired broadband 25 megabits per second or faster," Rippe says, citing figures from 2017 data collected by BroadbandNow.

Along with Lehigh University, with its Supply Chain Management program, the Lehigh Valley boasts a wealth of other colleges and universities, plus three career and technical schools that prepare students for jobs in logistics and other fields.

To help ensure that training focuses on the right skills, the Education and Talent Supply Council of the Lehigh Valley Economic Development Corporation (LVEDC) collects data about workforce supply and demand, and uses that information to drive regional workforce development strategies.

LVEDC is involved in several initiatives that focus specifically on logistics. "As one example, the National Center for Supply Chain Automation recently met in the Lehigh Valley, and LVEDC worked with them to bring employers and stakeholders together for a discussion about how to bridge the gap between educational institutions and employers," explains Don Cunningham, president and CEO at LVEDC in Bethlehem, Pennsylvania.

Proximity to a top-ranked supply chain management education program can pay off in many ways.

That's why the Department of Supply Chain Management at the W.P. Carey Business School locates much of its activity on Arizona State University's West Campus, in Glendale.

"That's where a lot of the transportation companies and distribution centers are located," says John Fowler, Motorola professor of international business and former chair of the department.

Nearby companies can easily send employees to the department's undergraduate and graduate programs, Fowler says. They may also take advantage of the new Knight-Swift Logistics Lab, where groups of logistics professionals can explore issues such as the ideal size of a corporate fleet, or whether to enter a new market.

Local companies such as U-Haul, plus companies from across the United States, participate in the department's Supply Chain Executive Consortium. Corporate members have the chance to connect with faculty and some of the department's best students, learn about ongoing research, and possibly influence the university's supply chain curriculum.

"We've had many people from local companies teach classes for us," Fowler adds.

Once you find your ideal location, you need to be able to buy, build, or lease the appropriate facility. You might well find the property you want in New Jersey.

With more than 40 percent of the U.S. population within one day's drive, the Port of New York and New Jersey close by, and an ongoing push for fast e-commerce fulfillment, the Garden State has seen a land rush in recent years. Luckily, supply is growing to meet demand.

An attractive package of business incentives—such as the state and local incentives available in Greater Houston—can offer a significant financial boost.

For example, some taxing jurisdictions in the Houston region offer freeport and goods-in-transit exemptions, which apply to inventory brought into Texas that leaves the state within 175 days, says Jonas Titas, director of manufacturing and logistics partnerships at the Greater Houston Partnership.

"On the local side, 380 and 381 Agreements can be customized for a project," Titas says. An agreement might, for example, offer a tax abatement, or provide a cash grant for construction.

The goods-in-transit exemption was one of several incentives that recently persuaded Best Buy, Ikea, and Amazon to locate distribution centers in Greater Houston. Rapid market growth in the Sun Belt is driving a need for such facilities in the region.

"We're trying to be as accommodating and hospitable to these projects as we can," Titas says

Each of these hot spots offers multiple logistics advantages, as do many other regions across the country. Ultimately, every company needs to invest the time in exploring and evaluating all the options to decide which logistics location will turn up the perfect level of heat.

Related Articles
Georgia: Setting the Pace in the Logistics RaceDownload the Inbound Logistics Planner App TodayLogistics Hotspots: Nine That ShineFlorida: Your Partner in ProgressSite Selection: A Power ProductionAlaska: The Vast FrontierGeorgia: Enabling Business Growth Through CollaborationThe Keys to Dangerous Goods/Hazmat Shipping ComplianceTurn to Technology to Attract the Next Generation of WorkersTransparency to Efficiency: How IoT Can Increase the Productivity of Your Transportation (Sponsored) More related articles...