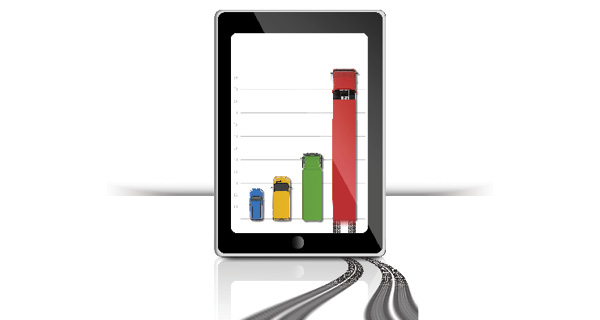 Less-than-truckload (LTL) powerhouses Con-way Freight, Old Dominion Freight Line, and YRC Freight made headlines when they committed to uShip's shipper-direct spot rate marketplace. The U.S. national and regional LTL carriers that are either live or coming online to the marketplace currently represent more than 80 percent of the annual volume in the $32-billion LTL sector.

To understand the story behind the headline, it helps to look back a few decades, when methods of choosing carriers and securing capacity were paperwork-intensive.

To manage the growing complexity of buying transportation, many large shippers contract with 3PLs, and work through brokers that buy and sell capacity. But small shippers are sometimes left to fend for themselves. Online platforms such as uShip are targeting this marketplace sector, and changing the way carriers and small shippers connect by simplifying the task of finding carriers to haul their loads.

The idea for Austin, Texas-based uShip emerged in 2004, when co-founder Matt Chasen and his fiancé were relocating to Austin from Seattle, and were paying for a moving van that was not full. Chasen began thinking about that extra space, while recalling how, one year earlier, his mother had trouble finding a reasonable rate to ship an armoire. Ultimately, she kept the furniture because the transportation cost was so high. "What if an online service matched those two needs—filling excess capacity at a reasonable cost?" Chasen wondered.

When uShip launched, it first targeted consumers who needed to ship miscellaneous, oversized items—such as Chasen's mother's armoire—to other consumers. In 2013, the company expanded into LTL freight by matching carriers with extra capacity to shippers looking for low-cost space.

"We don't exert any control over the transaction; we're a matchmaker," explains Jim Bramlett, uShip's general manager of LTL freight. "uShip is a carrier marketplace that operates on our platform. Carriers control the price and service, and can change it at any time."

The service, which had 28 carriers on board as of June 2014, reports 250,000 registered business shippers. Commercial freight accounts for about 35 percent of the site's total shipping volume.

The service is a departure from the way LTL typically operates—with rates heavily influenced by brokers who negotiate prices and determine the rate that will be published, Bramlett says. uShip replaces the third party who has an interest in the transaction with a neutral one.

uShip aims to ease the entry into LTL for small companies that ship less frequently than large retailers, and that aren't under a freight contract. Those companies represent uShip's sweet spot.

"Our target customers are small and mid-sized business shippers that carrier sales representatives may not be calling on," Bramlett says.

So why have some of the industry's largest LTL players signed on? "The uShip portal helps us reach small shippers who do not have experience or repeat contact with traditional LTL carriers," explains Brian Thompson, YRC's vice president of pricing.

Con-way Freight, based in Ann Arbor, Mich., also wanted to build relationships with smaller businesses as a way to expand its portfolio. "Con-way has a large sales force, but they can't be everywhere," says Steve Dean, Con-way's senior vice president of sales, who also sits on the uShip advisory board. "uShip acts as an extension of our sales coverage, and offers an opportunity for shippers to learn more about us."

Large LTL carriers also benefit by having an accessible way to quickly find new business. "A carrier could lose a major account tomorrow, and have empty space to fill," Bramlett says. uShip can help fill the gap until new business is booked.

How to Ship with uShip

Shippers use the site by entering package dimensions, and receiving rate quotes from multiple carriers. If shippers want additional carrier options, they can post a request on the website's marketplace. The uShip portal provides all the information necessary to evaluate pricing terms and service standards, including customer reviews, which are especially helpful for shippers without long-term carrier relationships.

Through the portal, shippers can book truck space, and schedule shipments, without having to pick up the phone or haggle over price. This method can save time over traditional ways of booking LTL space, which involve soliciting for bids and conducting multiple carrier reviews.

"Freight portals are well-suited for the wired shipper who likes the online experience," Dean notes.

Carriers often integrate their TMS with online portals, but keep the functions separate. Con-way, for example, uses its TMS to identify holes in its network. "Then, when we see that our trucks aren't full in a particular market, we go to uShip and drop our rates to attract freight in that market.

"Over time, uShip will give us the ability to flex rates day in and day out, week in and week out," Dean adds.

The ability to easily adjust rates and attract last-minute shipments to fill unused capacity is a draw for large LTL carriers. "The greatest cost that an LTL carrier has is unused capacity," Crowe says. "We offer aggressive rates to the reseller to help attract tonnage."

uShip makes its money by taking a percentage of each load match. "That transaction is completely transparent; it is a fair game," Bramlett says.

While uShip touts its transparency, Bill Bond, president of Freight Watch Inc., a Milwaukee-based LTL consultancy, says online portals typically aren't transparent enough. "The profit for online quoting engines is not identified," he notes. "It's built into the cost of the transportation." Bond believes online portals should clearly outline their profit, and list it separately from the total transportation cost so shippers know exactly what they're paying for.

Because 3PLs and brokers heavily influence LTL transportation, shippers can find the best deals by negotiating line items, including fuel charges and liability limits, directly with carriers. "I am a big advocate of direct carrier relationships," Bond says.

But direct relationships can be time-consuming. "Today's small business shippers don't have the time," Bramlett says. "They also may not fully understand the complexity of buying transportation. They want simplicity, speed, and value, and they want it through a single source."

By using an online portal, small shippers are also able to get the benefit of scale that generally evades those entering the marketplace independently. "If shippers negotiate directly with a carrier for one shipment every week, they will not be as favored with price as when they bring scale," Crowe says.

Online platforms encourage more logical pricing. "LTL transportation pricing has not been intuitive," Thompson says. "When I entered this business in 2000, every shipper had a negotiated pricing program and discount." Shippers would focus on the discount they were getting—50 percent versus 52 percent—in hopes of netting a better deal. Today, with less face-to-face negotiation, shippers are focusing more on the final rate, enabling comparison-shopping, Thompson says.

Small companies can still secure good rates by committing to a carrier for longer terms—at least one year, Bond says. Shippers can also sometimes save money by switching from national to local carriers.

Bond recalls working with a Wisconsin-based original equipment manufacturer in the machine parts industry that used a national carrier to transport goods about 50 miles. After switching to a local carrier, the company cut costs by more than half, and secured faster transit times.

With mergers and acquisitions reducing the number of carriers in the market, however, finding local carriers is becoming more difficult. "Shippers no longer have the choices they once had," Bond says.

Amid fewer choices, market pressures are further squeezing both carriers and shippers. "Capacity is as constrained as I've ever seen it, and, at the same time, the industry is dealing with a significant driver shortage," Dean says.

These disruptions have particularly affected 3PLs, who enter into contracts that require holding rates steady for one year or longer. Should capacity issues force a 3PL to pay a higher rate, the loss erodes profit. And, carriers occasionally don't arrive to pick up loads as a result of tight capacity.

A lack of capacity may be one reason why some carriers slip in customer service, but a missed load is the last thing any shipper wants. The reviews on uShip help shippers identify—and avoid working with—those carriers.

uShip also welcomes brokers who buy and sell truck space. However, Bramlett compares non-specialized brokers to travel agents who were displaced with the advent of Expedia and Orbitz. "Non-value-added brokers will move away from the transportation marketplaces," he predicts.

Because brokers buy low and sell high to make money off the difference, uShip's flat rate theoretically increases the odds a shipper will get a better deal, particularly when capacity concerns push prices upward. "Brokers are doing well because of capacity issues," Dean says. "Specialized brokers and 3PLs will likely continue to have a place.

"3PLs and brokers are a different kind of customer," he adds. "On many levels, they are more sophisticated. Savvy brokers will migrate to the online marketplaces."

And so will LTL carriers, as technology continues to transform how shippers buy freight services.

Both shippers and carriers can gain advantages by connecting through online shipping marketplaces such as uShip. Here's how it works. 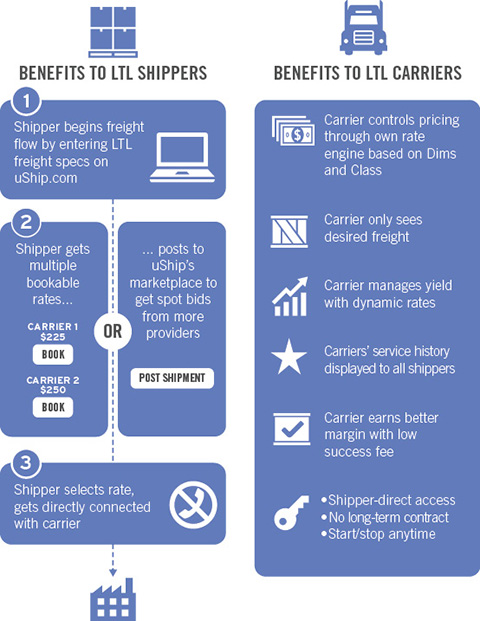