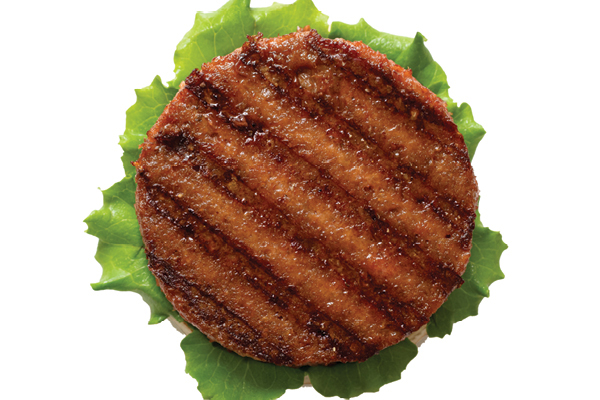 Facing empty meat cases thanks to COVID-19 shortages, many consumers are flipping to plant-based meat alternatives. Companies are responding to the demand with relish, producing brands that taste more and more like the real thing, but not without sizzling supply chain challenges.

The household name that in 1995 gave vegetarians a Thanksgiving option to the traditional roasted bird now faces far more competition in the plant-based meat alternative product category. Unlike more recent entries to the market such as burgers and snack foods, the Tofurky Holiday Roast never pretended to be anything more than tofu with seasonings reminiscent of holiday flavors.

The Oregon company's counterparts today are engineered to provide a similar taste and mouthfeel to meat—and suppliers continually develop novel ingredients that help them do that. For example, Improved Nature's soy-based fibrous plant proteins give a meat-muscle texture to its plant-based chicken breast fillet products.

The companies that make Beyond Burgers, Impossible Burgers, and similar products are responding to increasing consumer interest in diets that include more plant-based foods. The global plant-based meat market in particular is expected to increase from $150 million in 2018 to $320 million by 2025, according to Global Market Insights.

No Shortage of Opportunity

The perception that plant-based meat alternatives are healthier than animal products fuels strong consumer interest, although the meat industry is pushing back. Still, with COVID-19 outbreaks in meat-processing facilities creating shortages nationwide, some alternative meat manufacturers are seeing an uptick in sales as supermarket shoppers use empty meat cases as an opportunity to try the plant-based options.

While Tofurky's strong supplier relationships help make sure it can meet that demand (Nesterak says that 80% of its suppliers have been with the company since the beginning), even that's not enough to support the supply chain in some situations.

As more and more products enter the marketplace, there's greater demand and competition for a key ingredient in all of them: protein. Beyond Meat, for example, uses yellow pea protein in its burgers.

"Companies are having a hard time sourcing yellow peas in sufficient quantities at prices they're comfortable with," says Vincent Smith, professor of economics at Montana State University. "If you pay enough, you can convince farmers to switch from corn or wheat to pea production."

The question is what companies are willing to pay as they focus on profit margins.

That increased growth in the number of products makes all aspects of the supply chain more competitive. It's particularly difficult for companies such as Tofurky that use only non-GMO ingredients (meaning the genetic makeup of the plants used in its products has not been altered).

"We use soybeans, and 96% of the crop worldwide is GMO-based, so trying to make sure we get organic soybeans can be a challenge," says Nesterak.

No Evil Foods, which makes Comrade Cluck chicken substitute, Pit Boss pseudo-pulled pork, and other meat alternatives with as few ingredients as possible, would like to source more ingredients closer to home in North Carolina. The obstacle is protein quality.

"We have to source our wheat protein from Europe because they use fewer pesticides on crops there," notes co-founder and CEO Mike Woliansky.

Brooklyn-based kelp jerky maker Akua's supply chain problems have been related to logistics rather than ingredient availability. When kelp is harvested in the spring, it must be dried or flash-frozen immediately.

"Most co-packers don't have a giant freezer for 30 pallets of kelp, so in the beginning, every time we needed to run a batch, we had to set up a shipment to the facility," says Matthew Lebo, co-founder of Akua.

The company recently solved that challenge by contracting with a processor that has the on-site freezer capacity required because it specializes in frozen foods. Lebo is concerned that COVID-19 has created another issue.

"Because many restaurants are closed and aren't buying kelp, there will be too much of it," he says. "If farmers lose money on this year's harvest, will that restrict our supply for next year?"

Manufacturers can also face problems caused by long crop-growing lead times. Farmers are planting now for crops that will be harvested in one year. If a product in a brand's line suddenly takes off, companies might find it difficult to meet demand because they can't get enough ingredients.

Automation is an important supply chain element at startup Roc Regenerative Farms in Rochester, New York. The company recently launched hybrid burgers and sausage that improve the nutritional value of grass-fed beef and free-range chicken by blending them with organic mushrooms, which are grown by its sister company Leep Foods.

"Because we're in a high-cost labor market, we have to innovate to exist," says George Zheng, a co-founder of both companies. "We're continuing to invest in machine design that no other company has."

As Tofurky has demonstrated, however, plant-based meat alternative products have legs—they're just not attached to animals.

Some protein sources used in plant-based meat alternatives may sound familiar, but others aren't as well known. Here are some expected—
and unexpected—ingredients.

Soybean: Tofu, made from soybeans, is at the heart of Tofurky's products. Impossible Burgers also use soy, plus potatoes, as protein sources. Most of the soybeans in the United States are grown in the Midwest; Illinois grows slightly more than Iowa.

Pea: Many meat alternative products, including Beyond Burger, use yellow peas. In the United States, yellow peas are grown in Northern states, including Montana and North Dakota.

Seaweed: Seaweed can yield five times as much protein per acre as soybeans. Plant-based jerky manufacturer Akua uses kelp, a type of seaweed, which it harvests in late April and May from regenerative farms along the Northeast coast of the United States.

Mycoprotein: Mushrooms, which vegetarians often use as a steak substitute, are gaining popularity as a meat extender in blended products that combine meat with the nutritional value of plant-based products. Mushrooms help reduce meat's sodium content, cholesterol, and saturated fat.

Other protein sources include:

Impossible Burger and Beyond Burger dominate news coverage of plant-based alternatives to conventional meat products, even though neither is the top-selling brand.

Impossible Burger, the best-known product from California company Impossible Foods, made headlines when it partnered with fast-food chain Burger King to create the Impossible Whopper. The all plant-based burger is on the menu at restaurants in the United States, Hong Kong, Singapore, and Macau, but restaurants also use the ground beef-like product for tacos, meatballs, and empanadas.

The company says its burger offers as much iron and protein as a comparable serving of real ground beef, but with no cholesterol, less fat, and fewer calories than the real deal. It's made mostly of water, plant proteins, sunflower and coconut oils, and heme.

It's the heme—an iron-rich molecule that occurs naturally in hemoglobin in an animal's blood—that gets all the buzz because it's what gives the burgers their meaty flavor, sizzle, and bleeding effect.

Impossible Foods gets its heme from the protein soy leghemoglobin, which is found in soy roots. The company produces that protein through genetic engineering and fermentation.

While the Impossible Burger is gaining a stronger presence in supermarkets after entering that distribution channel in September 2019, Beyond Burger benefits from being first on the scene. It was third in the category's market share at the start of 2020; Impossible Burger wasn't even in the top 10.

When the brand's Los Angeles-based parent company Beyond Meat went public in May 2019, it enjoyed a 163% gain in the first day alone—a sign of the category's staying power.

Beyond Burgers get their marbling quality from cocoa butter and their juiciness from coconut oil and potato starch. Peas, mung beans, and rice provide protein, while beets offer the red coloring that makes the burgers appear to "bleed" when cooked. They have more protein and iron than ground beef burgers, less saturated and total fat, and no cholesterol.

Both brands share a commitment to sustainability. Beyond Meat's 2018 life cycle analysis documented that it requires 99% less water, 93% less land, and 50% less energy to produce its plant-based burger compared to a quarter-pound beef burger. A similar assessment for Impossible Foods reveals that its burger uses 87% less water and 96% less land while generating 89% fewer greenhouse gas emissions.