Nebraska: A Crossroads and a Gateway

An established leader in the U.S. logistics sector, Nebraska is extending its reach across the globe thanks to its outstanding transportation access.

No description would do Nebraska justice if it didn't include the remarkable logistics assets that set the state apart. And any profile without the word "crossroads" would most certainly be incomplete.

Connectivity is key to the state's logistics advantages. Positioned at the heart of the NAFTA trade corridor, Nebraska's Interstate 80 and connecting interstate roadways offer easy, direct transportation to major east-west markets. And two Class I railways—Union Pacific (UP) and Burlington Northern Santa Fe (BNSF)—operate on more than 4,000 miles of track in the state.

When it comes to logistics, Nebraska quite simply has it all. "With its central location, business-friendly climate, first-class infrastructure, minimal congestion, and speed to markets—combined with transportation advantages including a major river, two national rail lines, national trucking companies, a regional airline hub, and national interstate highways crisscrossing the entire state—Nebraska provides convenient access to all major U.S. and overseas markets," says Patricia Wood, marketing and public relations director for the Nebraska Department of Economic Development.

Such advantages have helped Nebraska support business and increase its growth in share of national exports. Need proof? The state ranked eighth in the Enterprising States study conducted by the U.S. Chamber of Commerce. And the Department of Economic Development received a grant to boost the number of small businesses in Nebraska that are exporting, and to increase the value of those exports.

Anticipating continued trade growth within the state, both UP and BNSF recently announced expansions in Nebraska. UP plans $1 billion in investment projects during the next several years, including the addition of track and technology upgrades, new crew-change buildings, and a bridge. As part of its 2012 $3.9-billion capital commitment, BNSF is investing an estimated $202 million in maintenance and rail capacity improvement and expansion projects in Nebraska.

Nebraska's connectivity makes it a natural fit for logistics and transportation service providers. In fact, as a percentage of total employment, the state has more people working in the trucking industry than anywhere else in the nation. Werner Enterprises Inc. and Crete Carrier Corp., two of the nation's top 10 trucking companies, are headquartered in Nebraska.

Such logistics advantages are among the factors that encourage manufacturers and distributors to establish facilities in the state. CNBC ranked Nebraska fourth on its list of top states for business in 2013—thanks in part to tax reform efforts. 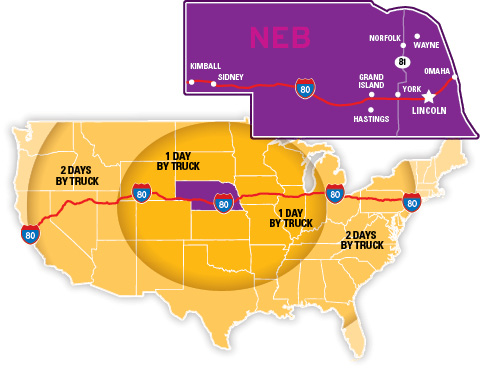 All those booming businesses require a stellar workforce, and Nebraska's ranks as the seventh-happiest in the country, according to the Gallup-Healthways Well-Being Index, which measures factors ranging from job satisfaction to water quality. Contributing to that sunny outlook is Nebraska's standing as the eighth-least-expensive state in which to live, according to the Bureau of Economic Analysis, an agency of the U.S. Department of Commerce. Factors used to make the determination include unemployment, cost of goods and services, and various taxes.

Nebraska's Department of Economic Development has plenty to say about the state's logistics and other assets.

"We have promoted Nebraska around the world," Wood notes. "The many advantages for growing businesses in the state are attractive to a variety of industries.

"Business executives readily see that Nebraska's central location, work ethic, infrastructure, and business climate help them get to markets anywhere in the United States and around the world, efficiently and cost effectively," she adds.

Wood cites the economic development department's strong ongoing partnerships with the Nebraska Logistics Council—and its parent organization, the Nebraska Trucking Association—as important means for the department to help promote and grow the state's transportation, distribution, and logistics advantages. These organizations work with Nebraska schools and higher education in developing programs and generating interest in the logistics sector.

"Nebraska also continues to invest in infrastructure improvements, develop sites and spec buildings, and promote them through a one-stop site and building locator," Wood says.

"The bottom line and the cost of doing business are important, and Nebraska has—and continues to identify—ways to improve the state's already business-friendly atmosphere," she adds. "When businesses invest in Nebraska and hire Nebraskans, a variety of incentive programs and opportunities are available to help them grow and succeed."

Companies seeking to locate or relocate to Nebraska—as well as those already in the state wishing to grow their businesses—frequently turn to the Nebraska Public Power District (NPPD) for help. The NPPD's Economic Development Team focuses on providing assistance in three principal areas:

"NPPD wants the communities and areas it serves to be prepared to take advantage of development opportunities," says NPPD economist Ken Lemke, Ph.D. "Taking care of businesses already here is the first and foremost task of any economic development program, because most job growth is due to expansion of existing businesses."

As the state's largest electric utility, NPPD's chartered area includes 86 of Nebraska's 93 counties. Operating as both a wholesaler and a retailer, it delivers power directly to business and residential customers. It also supplies power to local utilities operated by 51 towns and 25 rural public power districts and cooperatives.

"For instance, some organizations require refrigerator services 24/7, or constant usage of lights or fans," he says. "NPPD is able to provide all this when customers need it most through its mission to safely generate and deliver reliable, low-cost, sustainable energy, and provide outstanding customer service."

1. Geography. Nebraska is center stage to both regional and national markets. Interstate 80, the most traveled east-west transcontinental route of the interstate highway system, offers 482 miles of quick access to everywhere in the nation. Through Nebraska's roadways, goods delivered by truck reach more than 25 percent of the U.S. population in just one day. Within two days, that percentage increases to more than 90 percent (see map).

In addition, the nation's two largest rail companies—BNSF and Union Pacific—provide service to many Nebraska communities. Ten freight railroads operate more than 3,200 miles of track throughout Nebraska, and no major city in the United States is more than five days by rail from Nebraska.

2. Workforce. Nebraskans take pride in the quality of their work, and the workforce consists of pr  oductive, dependable, educated, and well-trained individ   uals who care about what they do. This contributes to high productivity and success rates, and low absenteeism and turnover.

3. Low energy costs. NPPD's industrial rates are 21 percent lower than the national average. NPPD is the state's largest electric utility, and uses a diverse mix of generating facilities, such as nuclear, coal, gas, oil, hydro, and renewable energy. In 2012, NPPD relied on carbon-free energy sources for more than 40 percent of the overall energy mix supplied to customers.

Gateway to the World

Nebraska's logistics advantages extend well beyond the state's borders—and, for that matter, the borders of the continental United States. Nebraska-based transportation and logistics company Werner Enterprises, for example, provides services throughout North America as well as Asia, Europe, South America, Africa, and Australia. In addition to its global headquarters in Omaha, Werner maintains offices in Canada, Mexico, China, the Netherlands, and Australia, and manages an extensive global network of agents.

"Many people link Werner to the United States, and may be less aware of the role we play in the international logistics space," says Craig Stoffel, vice president, Werner Global Logistics. "But, in fact, Werner is the largest cross-border carrier in North America."

That role has acted as a gateway to the rest of the world. "In the mid-2000s, many of our customers began to look for our help as they started to source from overseas," Stoffel says. "They knew that low-cost labor plus good infrastructure equaled good sourcing options. That took us to China, where regulatory changes allowed foreign companies to establish logistics operations. We evolved our portfolio, and established Werner Global Logistics."

Stoffel says Werner is now a "local" Chinese company, offering an array of domestic and international services, including warehouse consolidation and ground transportation. This allows domestic shippers to deal with Werner personnel point-to-point across the globe—the company provides services to more than 120 countries worldwide. One trusted company managing the supply chain from end to end creates opportunities for efficiency and cost savings.

Jonathan McIntosh, president and CEO of Omaha-based SnapStone—maker of a porcelain tile system—gives testimony to Werner's capabilities abroad. SnapStone began importing containers of its product from Brazil and China in 2006.

"We were impressed with the service Werner was able to provide—particularly on the ground—in China," McIntosh adds. "Werner really handles things, and has the right attitude. I can't speak highly enough about the relationship our companies share."

It is especially important for SnapStone to associate with growing firms such as Werner. "We have to work with partners that have the capability to scale up," McIntosh explains.

Werner may be spreading its reach across the globe, but make no mistake: Nebraska remains the company's home. Stoffel applauds the "very aggressive, pro-business" attitude of Nebraska's Department of Economic Development, and notes that Werner has partnered with the department on trade missions to China and Japan.

"When we talk about the state's logistics advantages, we cite our proximity to customers, low energy costs, extensive road and rail infrastructure, and the supportive legislators here," says Stoffel. "That's why we are a regular participant in trade missions abroad, and a regular stop for trade missions that come here. We help businesses elsewhere understand how easy it is to do business in Nebraska."

Nebraska has taken the logistics advantages inherent in the state's geography, and transported them quite literally around the world. Its leadership in the logistics sphere continues to expand to the farthest reaches of the globe.