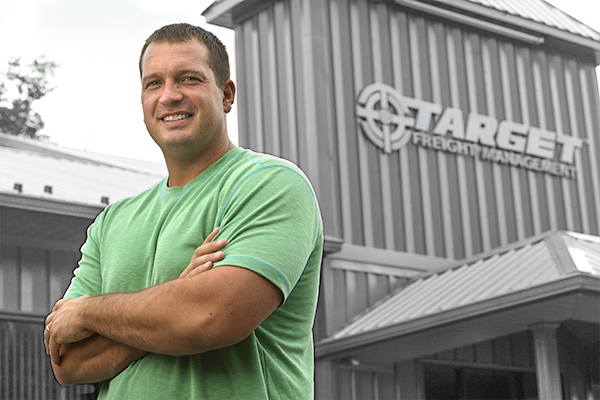 One day, while working as a salesman for Overnite Transportation (now UPS Freight), Mike Wagner offered a customer a great set of rates. But the shipper said he didn't need Wagner; the rates he already had with Overnite were lower than any Wagner could produce on his own. The shipper had obtained those rates from a third-party logistics (3PL) provider.

"That's when I decided I had to get into the 3PL business," Wagner says. Six months later, he started working for AFS Logistics. And less than four years after that, he founded his own 3PL, Target Freight Management (TFM), based in Pittsburgh. It took Wagner four months to sign his first account, but by month eight he turned a profit. In 2016, TFM expects to gross $65 million.

In a recent conversation, Wagner told us the story behind his fast-growing company and explained how growing up poor in Pittsburgh helped to shape him as an entrepreneur and leader.

IL: Why and how did you start Target Freight Management?

In my last position as national sales manager for KDL Freight Management, I developed the sales team, and we did a fantastic job. I made good money, but realized that if I did this for myself I'd make a lot more. I then thought about founding my own company.

I met Mark Raymond, who became my business partner, when a neighbor brought me to Mark's house to play volleyball. It turned out we grew up in the same tight-knit neighborhood in Pittsburgh, although about 15 years apart. We became friends. I never asked him for money, but he knew I wanted to start a business, and he kept asking about my plans. In October 2008, he called and offered to make an investment. I left KDL and started my business in January 2009.

IL: Why did the market need a new 3PL? What made TFM different?

In January 2009, the stock market crashed and everyone was scared. When I quit my comfortable job, people asked, "Are you crazy?" They didn't understand that TFM specializes in saving companies money on less-than-truckload (LTL) shipping. In a down economy, a plethora of companies needed my services.

Back then, there probably wasn't a big difference between me and other 3PLs, and they likely had better technology than we did. But I had tenacity. While my competitors made 20 sales calls, we made 500. We got in front of more people, talked to more C-level executives, and earned more opportunities as a result.

TIL: TFM has scaled up quickly. What kind of growing pains has the company gone through?

There were times when we signed so many new accounts at once, our operations couldn't keep up with the volume. I hired more operational people, and then we had to catch up on sales. It's hard to achieve the perfect balance of signing accounts at a clip that operations can manage. But you get better at it over time. We built an internal system to automate many operations tasks, and that allows us to bring on more customers than we could if we relied solely on human involvement.

IL: A lot of friends and family members work for you. How do you make that work?

You just have to hire the right ones. I have told friends and relatives who have asked me for jobs, 'This isn't a good fit for you.' I'm careful about the people I choose to work for me. I look for a certain work ethic and set of skills that match what the company needs.

It hasn't always worked out; I had to let one of my best friends go a few years ago. To his credit, he was fine with it and we're still friends. While it's not always easy, it's great working with people you know. We have a lot of fun when things are going great.

IL: What's at the top of your agenda at the company right now?

Staying ahead of the software curve. LTL carriers constantly change their pricing structures, based on factors such as density and dimension. We've developed a solution that alerts us every time the National Motor Freight Traffic Association makes a change to the freight classifications. Now we know in advance when one of those changes will affect our customers, giving us time to negotiate before the change goes into effect. I've started a separate company, Freight Innovation Density Analytics, to work on that.

IL: What early experiences helped to shape you as a leader?

My childhood motivated me to get where I am today. From age 9, I often felt I was raising myself. My father was never around, and my mother had a lot of issues, including a chronic illness. There was never much money. I didn't want to be the kid who came from nothing and just followed the same track.

Then I became a father when I was only 20. That made things difficult at the time, but ended up being the best thing that ever happened to me. The minute my daughter was born, my focus changed. I was not a good student in grade school or high school, but I earned an MBA at 23. While the education opened better opportunities and jobs for me early on, my street smarts are what help me grow this company.

I'm involved in everything. Face time is important to me. People certainly have control and the ability to make decisions, but they like to bounce things off me. When people are working on projects and have questions, I try to be there for them. My door is open all the time, and people walk in all day.

IL: What's the most difficult aspect of your job?

I just don't have enough time in a day. I want to get so many good things done, but I'm only one person. The upside is, I love what I do. I sit down at my desk in the morning, and when I look up again it's 6 p.m. I'm a family guy, so I want to get home at a decent hour. My kids play tons of sports, and I go everywhere with them. I make it a point to always have dinner with the family.

But after the kids go to bed, I often come back to work.

While his role as CEO keeps Mike Wagner involved in every aspect of the business at Target Freight Management, at heart he's still a salesman, and he still maintains his own accounts. Visits to those customers deliver some of his greatest on-the-job fun.

"I love when customers walk me through their operation," Wagner says. "I get to meet so many smart business people with great ideas—entrepreneurs, just like me, who started different companies." The variety is amazing, he adds. "I don't walk in and see somebody making widgets every day; I see so many different products. And when I see those products in movies, or on store shelves, I say, 'Oh, that's my account! And that's my account!'"