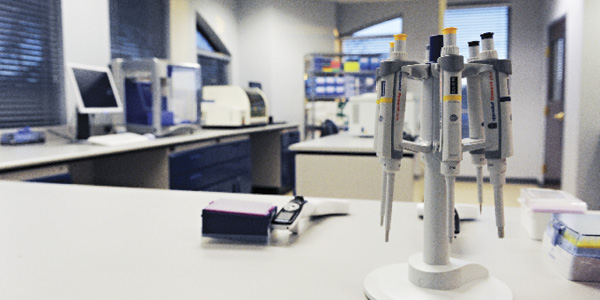 In the field of medical testing laboratories, large companies chisel out a competitive advantage by quickly processing specimens, setting a standard small labs must meet if they want to survive. To achieve this speed, the big players send couriers to doctors' offices to pick up patient specimens, swiftly transporting them to testing labs. Speed means fast lab results for waiting patients, whose lives may depend on the answers.

Since it opened in January 2012, SilverStaff Clinical Laboratories Inc.—a small, specialized medical testing facility in Franklin, Tenn.—had been using a shipping company instead of more expensive couriers, transporting specimens and trying to keep a competitive pace. But the carrier it used offered limited ability to track packages in transit, and couldn't service all of SilverStaff's customers, resulting in expensive stopgap solutions.

SilverStaff's competition moves fast, and the company needed to find a new partner to keep up. The solution to its challenge was a Web-based shipping portal for healthcare companies, run by Atlanta-based logistics provider UPS.

Customers in 38 states send SilverStaff specimens for genetic testing, prevention testing for cardiology patients, and other clinical laboratory services. Despite its growth, the company continues to perform testing solely out of its Tennessee facility, which makes shipping speed and visibility critical to its continued success.

"We compete with national labs that employ couriers," says Jimmy Kendrick, chief operating officer for SilverStaff. While those couriers were picking up specimens from competitors' labs daily for near-certain delivery early the next morning, SilverStaff never knew exactly where its packages were, or when they would arrive.

"We must be able to quickly determine where specimens are in transit," Kendrick says. "We needed a partner, not just a carrier."

SilverStaff's process began when staff at customer clinics labeled specimens with handwritten waybills, and carriers picked them up for transport to Franklin. Some carriers, however, didn't offer an adequate number of pickup times in specific areas to properly serve the clinics. And for one South Carolina doctor, the carrier offered no workable pickup times, forcing SilverStaff to hire a courier in that location. Such ad hoc solutions led to inefficiency and increased costs.

Even for the majority of locations where a clinic had access to a driver, SilverStaff had no way of knowing where packages were in transit, or if a specimen's arrival would be delayed the next morning. The dearth of information stalled operations, with SilverStaff workers spending excessive time manually tracking shipments.

Not knowing exactly what inbound shipments were en route also caused delays. Each morning, SilverStaff workers arrived at the lab, sorted through all the deliveries, then checked with customer clinics to determine if any expected specimens were missing.

While SilverStaff struggled with its inbound shipping challenges, UPS was developing a laboratory logistics portal, which it planned to test through a beta user program. UPS and SilverStaff started working together in September 2012, when representatives from the two companies began holding roundtable discussions and brainstorming sessions to determine how UPS's services could address the lab's problems.

Because the UPS lab logistics portal was a beta version, it underwent multiple rounds of changes, even after going live, to integrate with SilverStaff's requirements, processes, and databases, including the company's internal Laboratory Information Management System (LIMS), used to control daily workflow. Both SilverStaff and its customers track specimens with LIMS, making its compatibility with the new logistics solutions critical.

Working Out the Kinks

One early challenge SilverStaff and UPS worked through involved clinics that don't process specimens until late in the day. The LIMS directs clinic staff to print shipping labels from the UPS Web portal after processing specimens. If a clinic ordered a label after the UPS cutoff time, the specimen would not be added to the day's pickups.

To solve the problem, SilverStaff reworked the LIMS to alert clinic staff when a specimen from the previous day is still awaiting pickup. "The alert provides a link to the UPS portal, so the clinic can input the required information, request pickup, and print a shipment label," Kendrick says.

The UPS Smart Labels SilverStaff now uses represent an improvement over the old, handwritten ones, which offered little information. The computer-generated, peel-and-stick tags include bar-code-assisted tracking that reduces the labor associated with preparing and processing shipments. When a UPS driver scans the package at pickup, shipment information uploads to the logistics portal. "The labels give SilverStaff visibility to its inbound shipments," Cody says.

UPS and SilverStaff arranged pickup times to coordinate with various clinics' closing times. At the end of each day, SilverStaff employees print reports listing all the specimens scheduled to arrive the next morning.

With the new system, SilverStaff gained the ability to identify packages that won't arrive on time. The logistics portal system tells lab workers which clinics requested a driver, and the end-of-day reports verify pickup. If a clinic requested a pickup, but the shipment is not listed on the end-of-day report, the lab knows a problem has occurred and can take steps to determine the cause of the delay.

Not all of SilverStaff's fixes were technology related. For the clinic in South Carolina that the lab's former carrier didn't serve, SilverStaff and UPS worked with the UPS area hub manager to reschedule driver pickup times. For another difficult-to-reach clinic, the companies arranged to place a UPS dropbox in the parking lot.

Since implementing the system, SilverStaff has undergone rapid expansion. In 2012, the company processed as many as 1,500 tests per week; it now tests about 10,000 specimens per week. Kendrick says the new system gives him peace of mind, ensuring the tests will be tracked until their safe arrival at the Tennessee facility for processing.

From the perspective of SilverStaff's clinic customers, the new system wasn't a huge transition, because they continue to create labels and leave packages for pickup. The increased visibility the system offers, however, gives SilverStaff a competitive advantage.

The new system also makes it easy to train new customers remotely, supporting expansion by reducing the costs of teaching clinics how to prepare specimens for shipping. "We gained 50 new dental clinic customers in three months during late 2013," Kendrick says. The clinics are located nationwide, which would have made traveling to train staff cost prohibitive.

The system is capable of growing with SilverStaff, without bottlenecking the increasing number of specimens that the company will handle as its customer base expands. "As the lab manages higher volume, forecasting and staffing become more critical," Cody says.

For Kendrick and SilverStaff, finding and integrating new systems is a vital component of business expansion. "The lab is adding capabilities, which creates new logistics challenges," he says. "We work with our solutions providers continually to serve our customers."

With that approach to innovation, SilverStaff tests positive for a healthy logistics operation.