Global trade professionals experienced a great deal of disruption during 2017, with trade agreements being canceled and renegotiated, regulatory enforcement on the rise, the timeline for Brexit approaching, political instability a growing concern, and more. Networks that had been relatively stable for years are now in flux.

To respond to these global market forces, companies need to re-engineer processes and supporting systems to achieve a new level of agility. To help supply chain managers proactively prepare, Amber Road and AAEI published The Trade Trends Report, 2017 Survey on Sourcing, Trade and e-Commerce, which identifies the following global trade challenges and strategies.

E-commerce’s place in shaping today’s retail landscape is no longer in dispute, if it ever was. The tidal wave of store closings that swept through the retail industry in 2016 took down both old icons and newcomers alike. While part of this was attributable to the global economic climate, a large portion of the impact came from e-commerce replacing traditional sales channels.

The 2017 global trade landscape shifted significantly from expectations in 2016. The Trans-Pacific Partnership (TPP) agreement, which would have covered 40 percent of global commerce involving 12 Pacific Rim nations, is essentially defunct following the U.S. exit. The opportunity for duty-free trade with Japan, Vietnam, and Australia has flitted away, and sourcing decisions that were made with an eye to eventual enactment of the TPP may now look like bad ones.

Companies that are well insulated with a diversified sourcing base will fare better when unexpected events come to pass, or when expected events don’t happen.

Diversification, however, comes with risks. Survey respondents recognize the challenges of running a global supply chain, including speed-to-market, vulnerability to disruption, and the complexity of international trade compliance. Different sourcing locations have a unique set of considerations, including product quality and the potential for duty-free or preferential trade.

When it comes to e-commerce versus traditional retail, the supply chain’s main functions aren’t extraordinarily distinct. Every company is concerned with the bottom line and meeting consumer expectations, regardless of the channel.

Whether a product is destined to arrive in a storefront or directly to a customer’s doorstep, it starts in the same place and travels along the same supply chain. The logistics of that movement, however, can differ as the product approaches its final destination. For cross-border e-commerce, shipments of single packages can bring even more transportation headaches than containers of goods, because they are often low-value with small margins. That doesn’t leave much room for error.

Thanks to the expansive nature of today’s global supply chains, there are numerous places where risk calculations must factor in. When asked where their company is most vulnerable, respondents are almost evenly split between several large, impactful concerns. The highest-ranking vulnerability reported (25 percent) is supplier risk based on product quality. Another 21 percent say supplier risk based on capacity and stability, 20 percent say regulatory compliance risk, 19 percent say lack of staff to manage the supply chain, and 15 percent say transportation costs. 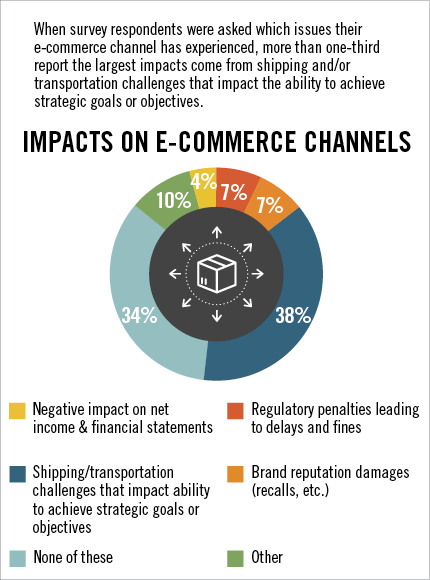 Related Articles
How 3PL Warehouses Can Capitalize on the Escalating Demands of Prospects and CustomersWalmart’s ShippingPass Has Ended. What Retailers Should Do Next.Download the Inbound Logistics Planner App TodayOmni-Channel Retail: Roadmap To ProfitShaking Up the Brown Box: Big Winners in Supply Chain EvolutionSolving the E-Commerce PuzzleRethinking Reverse Logistics for Online Apparel ReturnsTackling Retail Logistics: Build Your Team FirstThe Who, What, When, and Why of Warehouse WearablesGOOD QUESTION | What logistics concerns keep you up at night? More related articles...