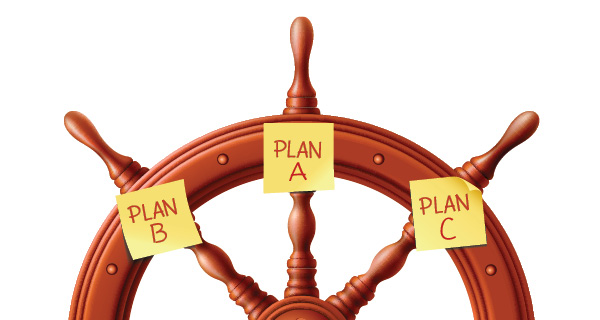 No one knows whether the 2014 U.S. West Coast port labor negotiations will go smoothly or result in import and export traffic disruptions. Evaluate your supply chain now and implement contingency plans to avoid trouble later.

As the dock employers' Pacific Maritime Association (PMA) and the International Longshoremen and Warehouse Union (ILWU) prepare for a complex contract negotiation in spring 2014, many companies are concerned about a potential supply chain disruption and its effect on the overall U.S. economy.

Their concern is well-founded, as past negotiations have been difficult. During the 2002 contract negotiations, the PMA introduced technology to the ports in the form of scanners, sensors, and bar-code tools to make cargo tracking and flow more efficient. These technology upgrades resulted in the elimination of 10 percent of longshore jobs. Intense talks resulted in a 10-day lockout, with normal port operations resuming only after an intervention by President George Bush.

During the 2008 negotiations, the PMA charged that the ILWU engaged in a day of disruptive activities on May 1, aimed at creating leverage at all West Coast ports. The ILWU claimed individual members used the day to protest U.S. military involvement overseas. Eventually, both sides compromised, agreeing to increase wage rates and automate cargo-handling systems to speed the flow of goods and enhance security.

In the potentially complex 2014 negotiations, ILWU and PMA primary issues include healthcare costs, pensions, and jurisdiction of related jobs some parties consider outside the current contract. These discussions may be time-consuming compared to past negotiations, when most effort focused on automation and wages.

The ILWU recognizes that productivity improvements and subsequent headcount reductions are inevitable. "We know that automation is coming," says ILWU President Robert McEllrath. "In fact, we have a long history of accepting automation, provided that all associated work is assigned to the ILWU."

The relatively recent Panama Canal Pilot Unions (PCPU) affiliation with the ILWU may provide a new dynamic to the talks, which affect U.S. West Coast and Panama Canal ports. Negotiations between the PMA and ILWU might result in unpredictable disruptions, which could increase costs, and lead to capacity challenges, transit time delays, and a lack of supply chain reliability.

Uncertainty Puts You at Risk

Contract negotiations in prior years entered the 11th hour with inconsistent results. In 2002, the stalled negotiations cost the U.S. economy an estimated $1 billion per day. Not only did the ports require six months to recover, but the disruption also profoundly affected retailers, importers, manufacturers, agricultural exporters, and other affiliated industries. In contrast, in 2012, Port of Portland union members secured a last-minute agreement ensuring that their jobs would not be privatized, thus preventing a disruption.

Although companies can track the evolution of negotiations over time by following the news, they can't gain certainty about the process or results until contracts are signed.

To protect your business, assess the impact of potential disruptions on the current state of your supply chain, then create response plans that minimize its effect on landed costs and/or delivery times. Evaluating potential outcomes well before they actually occur is critical, and can make or break a response plan.

This response plan will need to evolve over time to reflect the progress of negotiations and the types of mitigation actions available at any time. Here are the steps to follow:

Phase 1: Assess the impact of disruption. Port disruptions may cause companies to deviate from their existing supply chain strategies, and optimize cost versus service within the constrained environment. For example, cost-driven companies may have to move products via alternate ocean routes with longer transit times, leading to poor product availability and lost sales.

Companies focused on responsiveness may currently be moving product via air freight, but could face sharp capacity constraints as a ripple effect if West Coast ports are affected. Thus, companies may need to work with their logistics service providers to book space in advance, secure alternate routings, or pay rapidly increasing spot prices to keep freight moving.

Knowing the financial impact of disruption enables companies to develop a pre-disruption plan that balances investment in developing and implementing a contingency plan against the cost of responding without planning.

Phase 3: Prioritize the response options. Some response strategies, such as building onshore inventory and developing alternate sources of supply, require long-term planning and implementation horizons. Thus, the earlier you start planning for the potential disruption, the more response options you have, and the better prepared you will be to minimize any impact.

Use a Risk Priority Number (RPN) to quantify the risk of disruption. RPN is a combination of three factors: severity, occurrence, and detection.

In the example, to minimize the impact of port disruptions companies should:

The sooner you initiate planning for potential scenarios, the better prepared you will be to make informed decisions.

Identifying the benefits and constraints of possible contingency responses to supply chain disruptions can help ensure your plan aligns with your objectives.

Evaluating specific aspects of each possible risk response allows you to assign each response a Risk Priority Number (RPN), then determine the appropriate action depending on the time remaining before contract expiration. 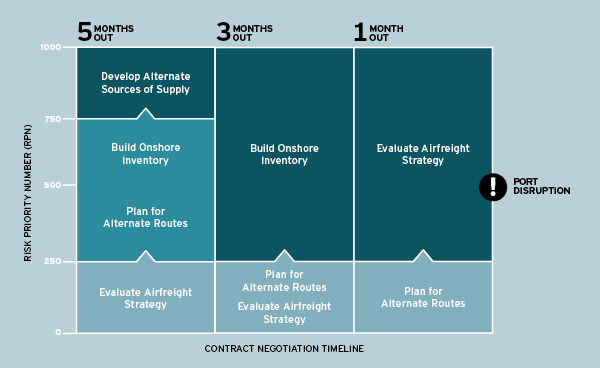